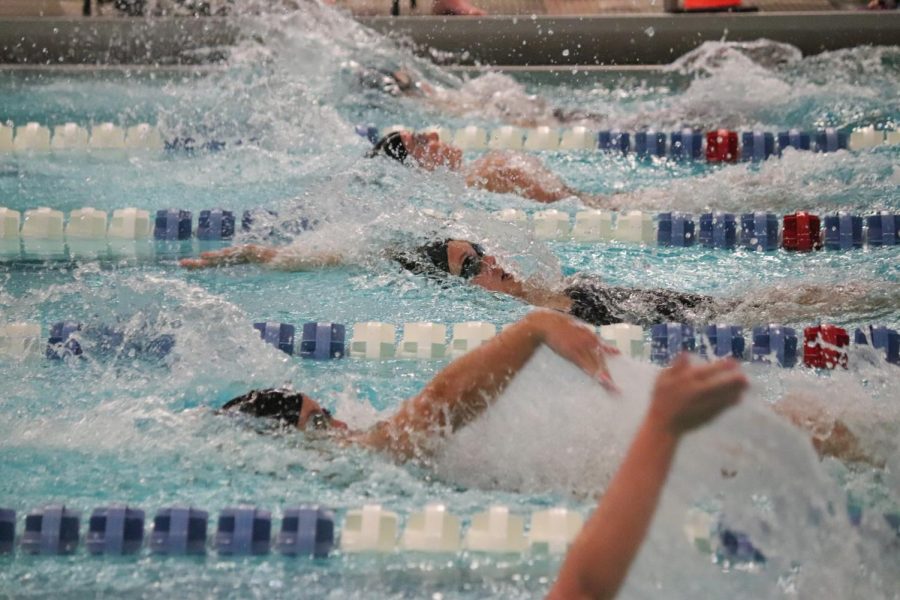 This past Saturday, Jan. 18, the GVSU swimming & diving teams competed at home, unfortunately without Findlay, as they were unable to attend due to the weather. The team decided to utilize the meet for personal improvement and even more practice for the upcoming GLIAC Championships. The swimmers had fun competing against each other and some were left with promising scores for next weeks matchup.

“We were a little disappointed but we figured we got parents coming, it’s our Senior Day, so we would give it ago and our kids stepped up and raced well,” said GVSU coach Andy Boyce. “I think it gave a lot of people the opportunity to participate in some events that they don’t normally do and it also let some people swim events that they swim in the championships. As coaches it allowed us to see what they can do.”

Of the many highlights on Saturday’s meet, Keegan Hawkins and Charlotte Brereton did quite well in the men’s and women’s 400-IM, as well as the women’s 500 for Brereton. Hawkins ended up breaking the pool record with a time of 3:59.24, igniting the crowd with cheers and applause as his teammates celebrated from the sidelines.

“I feel really good, especially coming off a tough week of practice, but this is the rough season before conference,” Hawkins said. “Coming out today and breaking the record, I couldn’t have done it without my teammates.”

Brereton competed fiercely as well, winning the 500 and the 400-IM.

“They went pretty well for being so close to conferences, its definitely good to see some fast times,” Brereton said. “I would like to get at least top 16 in all my events and to be able to be on the scoring team.”

With the athletes making the best of their unfortunate situation, the sense of teamwork and friendly competition was bouncing off the walls of the Fieldhouse pool as they cheered each other on and celebrated the big wins of the afternoon.

The mens 50-free was completed by three swimmers within milliseconds of each other around 21.05, which was well-received by the coaches and teammates, as well as the parents in the audience. The energy was high despite Findlay being unable to attend, making the meet an unplanned mock competition surrounded by good sportsmanship and team bonding.

“All my teammates are around me supporting me,” Hawkins said. “It’s indescribable, it’s awesome.”

Looking forward for next week’s meet against Wayne State, the swim and dive teams will be traveling to Detroit on Saturday, Jan 25 for their last meet before the GLIAC Championships, aside from the GVSU Diving invite on Saturday, Feb 1. The teams are wrapping up their first half of the season, ready to take on the championships with their A-game.