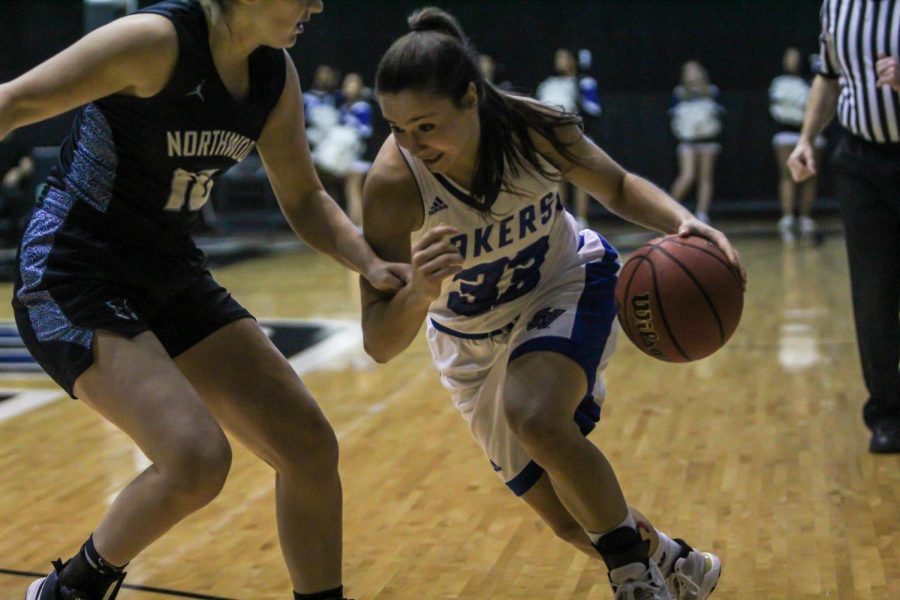 The GVSU women’s basketball team took down Northwood 74-35 in GLIAC play on Thursday night inside the GVSU Fieldhouse Arena. The Lakers improved to 15-1 overall and 7-1 in league play.

In the first game, the Lakers were led by senior guards Taryn Taugher and Victoria Hedemark who combined to score as many points as their Timberwolve opposition (35) by the final buzzer. Taugher poured in a season-high 19 points while Hedemark also had a season-high 16 points, grabbed four rebounds and recorded four steals.

“It felt good,” Taugher said after being asked how she felt after pouring in a season-high in points. “But it was more than just me. We hit the boards, attacked in transition, capitalized on second chances — it was a team-wide effort.”

Senior center Cassidy Boensch was the only other Laker in double-figures with 11 points and senior guard Jenn DeBoer totaled eight rebounds and seven assists. As a team, the GVSU defense continued to force their opponent into making tough shots. After holding Wayne State last Saturday to just 29 percent shooting from the field, the Lakers held Northwood to a 25.5 percent mark from the floor and 16.7 percent from behind the arc, in addition to forcing 23 Timberwolf turnovers.

GVSU jumped out to a 12-2 lead halfway through the first quarter and did not score a field goal for the rest of the frame, but went 6-6 from the free-throw line to lead 18-6 after 10 minutes of play. The Lakers quickly grew their lead to 29-9 with 6:24 left in the half before the Timberwolves would knock down a pair of three-pointers to cut the deficit to just 31-17 at the break.

The Lakers defense was at their best in the third quarter, forcing Northwood to shoot just 1-10 from the field, while increasing their lead to 52-20 by shooting 7-10 from the field including 2-2 from three-point range. The two teams traded buckets back and forth in the fourth quarter before GVSU grew their lead to a game-high 39 points at 74-35 in the final minutes of the contest.

“We’ve worked really hard to create opportunities around Cassidy, because she’s usually the point heavy scorer,” Hedemark said after the game. “Tonight we did a good job moving around her and that lead to us scoring more points.”

The first quarter was a struggle for the Lakers offensively as they trailed 8-2 early in the frame. Neither team would score the final 3:54 of the quarter and SVSU took an 8-5 lead into the second quarter. GVSU’s offense would begin clicking in the second, going on a 9-0 run to grab a 19-12 lead with 4:51 left in the half. The Lakers sustained the lead and went into the halftime break up 27-20.

SVSU opened the half with a layup before GVSU went on an 11-0 run to grow their lead to 38-22 midway through the third quarter. The Lakers continued to increase the margin in the fourth quarter, going up a game-high 19 points at 57-38 with 1:14 left in the contest.

GVSU will host a pair of teams next week beginning Thursday, Jan. 23 versus Michigan Tech at 6 p.m. inside the GVSU Fieldhouse Arena, followed by Sawyer’s Day on Saturday, Jan. 25 against Northern Michigan at 1 p.m.