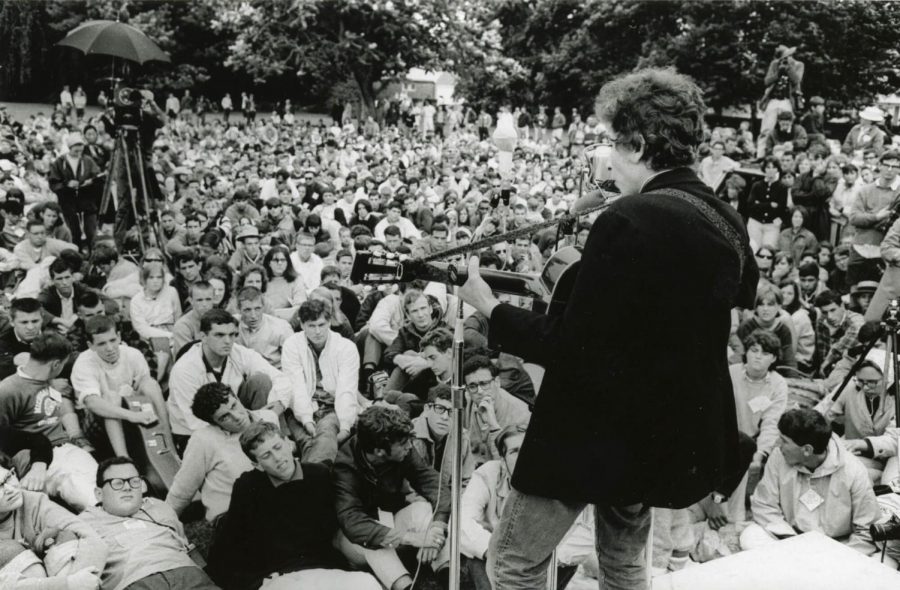 In 1964, 21-year-old photographer Douglas Gilbert set out on a week longer journey to capture the essence of Bob Dylan. Working for LOOK magazine, Gilbert took hundreds of candid photos of the up and coming star.

The pair spent time together in Dylan’s home in Woodstock and at the Newport Folk Festival. Many of the photographs taken were not focused on Dylan’s performance.

“I wanted to tone down the stage stuff and focus on who Dylan was as a person.” Gilbert explained years later.

However, upon presenting his layout to the editor, his photos were rejected for Dylan looking “too scruffy for a family magazine.” Just like that, Gilbert’s story was killed before it got off the ground.

Gilbert kept onto his photographs for years after the project was shot down. After more than forty years of keeping them to himself, Gilbert published a book of some of the photos, titled “Forever Young: Photographs of Bob Dylan”.

Even with a book published, not all of Gilbert’s photographs had been seen by the public.

In 2020, that all changed when Gilbert made the decision to donate his collection of photographs, negatives, prints, slides and even some letters from Dylan himself to Grand Valley State University.

“Now, having made this move to the university, it has been really satisfying,” Gilbert said. “I really felt like I was at the end of something anyway.”

Now 77 years old, Gilbert has developed glaucoma and has unfortunately lost almost 90 percent of his vision.

The Douglas R. and Barbara E. Gilbert Collection of photos is the largest collection to be donated to the university.

Other performers in the photos include Simon & Garfunkel, John Sebastian from the Lovin’ Spoonful, and Carol Burnett.

Currently, the photo collection is on display at Engagement Lab within the new art storage facility, which is located on Winter Ave. The exhibit is open to the general public, as long as the storage facility is notified in advance.

Gilbert currently has an exhibition of some of his favorite photos from his ten year long trip to Italy. The display, titled “Shadow and Light” will be at the Blue Wall Gallery on the DeVos center until June 19.