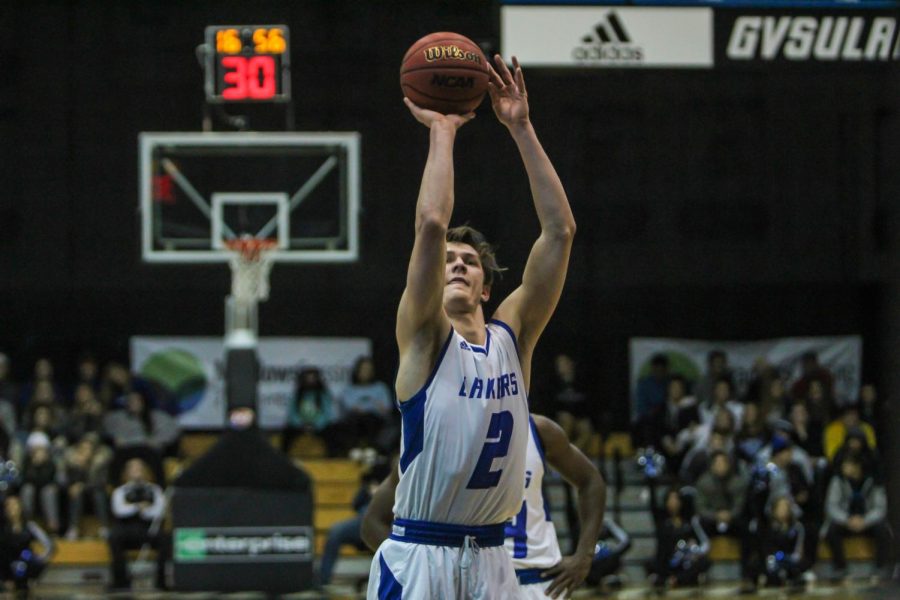 With 6:00 left at the GVSU Fieldhouse Arena, Michigan Tech senior Kyle Monroe hit a three-pointer to earn 38 of his total 53 points.

This key shot brought the Huskie lead to 13, as the Lakers saw themselves down with six minutes left to play.

Despite this large deficit and a clock that was working against them in a setting that felt too much like a sports movie, senior Jeremiah Ferguson (26 points, eight rebounds) told his fellow Lakers to never give up.

While Michigan Tech had a fantastic solo effort from Monroe, the Lakers beat him in a true team effort, as all five starters made big plays in either the final six minutes or in overtime.

Right after the three, GVSU used their advantage, as on back-to-back possessions, junior Christian Negron (nine points, eight rebounds, four blocks) put back an offensive rebound and had a powerful two-hand slam that woke the crowd up.

After a spinning post move by Monroe, junior Isaac Gassman (20 points, 3-4 on threes) responded with a lay-up and three pointer of his own to cut the Huskie lead to seven. What makes Gassman’s scoring more impressive is that he was able to contain Monroe on the defensive end in the final few minutes.

“(Gassman) did a good job,” said GVSU coach Ric Wesley. “It’s a tough match-up. (Monroe is) an inside-outside guy, and he’s so strong in the low post. We wanted to take that away, which we did a good job of in the first half. We didn’t have an answer when he was outside, but we tried Ike on him, and I think his length, focus, and concentration was a little better match-up for us.”

After yet another Monroe post move, Ferguson and Gassman made back-to-back threes to cut the deficit to three with 2:14 remaining in regulation, which is where it would stay until there was 27 seconds left. That’s when Van Tubbergen got fouled on his patented spin-off-the-defender post move for two big throws.

While the Lakers struggled at the line all game (13-23), Van Tubbergen was able to hit two clutch free throws to tie the game at 84, even though the second one bounced around the rim four times — just like Kawhi Leonard’s shot to take the 2018-19 Toronto Raptors to the finals.

Neither team was able to eclipse 84 in regulation, as even though Michigan Tech got two good looks at the rim, Negron did his best impression of Dikembe Mutombo and swatted those lay-ups away like flies at a summer barbecue.

“That’s just my role,” Negron said. “I got to be down there and be a rim-protector. You saw how great our defense was on the perimeter, Ferg got a couple of steals up top. We pressured the guys, but every once in a while they’re going to slip in there, and I just try to contest as much as I can.”

The overtime period was all GVSU, as while Monroe unfortunately dealt with some untimely cramps, GVSU went on a 9-1 run, with seven of those points coming from Ferguson and the other two coming off a clutch step-back from senior guard Jayden Hodgson (six points, three assists).

After a few more blocks from Van Tubbergen and Negron, Monroe and Michigan Tech junior Tommy Lucca hit back-to-back threes of their own to shorten GVSU’s lead to one. After Gassman went 1-for-2 from the free throw line, the Huskies had 3.5 seconds left.

Sophomore Owen White got a good-looking three up to win it, but Van Tubbergen needed every inch of his 6’7” frame to deflect the ball away in the closing seconds, securing the GVSU win.

“I know there’s only three seconds left, and I see him dribbling and try to corral the ball,” Van Tubbergen said. “My man leaked out, so I tried to recover as quick as possible. I closed out as hard as I could and I was lucky enough to get a piece of it.”

With the win, the No. 11 Lakers improve to 16-2 and remain at the top of the GLIAC and look to earn another win on Sawyer Day against Northern Michigan on Saturday, Jan. 25, at 3 p.m.

“What a game,” Wesley said “I’m really proud of the way our guys scratched and clawed tonight. We needed everything they had and I give our players a ton of credit for this one. This was sheer will to win.”