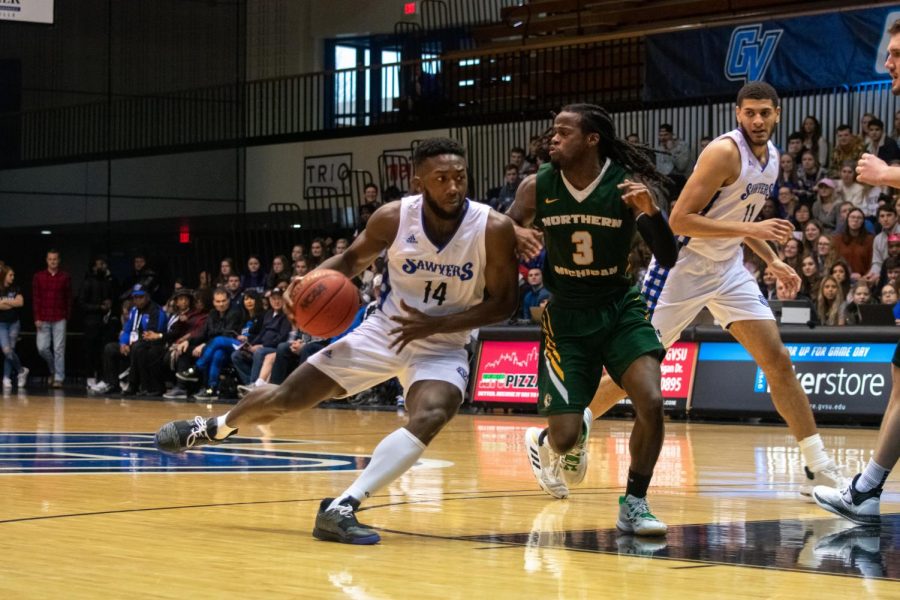 It felt like deja vu for the Grand Valley State basketball team on Saturday, as just like two days prior, thanks to a barrage of threes given up to a team from the Upper Peninsula, the Lakers found themselves down 16 with 3:21 left in the game. The Lakers, who played as the Sawyers during the faux-back game, ultimately fell to Northern Michigan University, 73-75.

A jumper from junior John Slater got the run going for GVSU, and after a key three pointer from Isaac Gassman and five straight points from senior Jayden Hodgson, it was an eight-point game in a matter of minutes.

That’s when GVSU turned on a press that surprised the Wildcats, which led to a quick jumper by Ferguson. But then the squad also gave up an easy dunk with the aggressive play of the zone.

All while this was happening, the over 2,000 fans in the GVSU crowd were as boisterous as ever for their No. 11-ranked basketball team. The flannel-clad crowd watched intently, staying to hopefully see another comeback.

“Props to the GVSU marketing team for getting the place rowdy,” said GVSU coach Ric Wesley. “But unfortunately, we weren’t able to get the job done.”

Following a clutch three from junior Jake Van Tubbergen to cut the Wildcat lead to five, junior guard Alec Fruin made the last points of the game for NMU.

Shortly after those free throws, Hodgson brought the thunder from down under, hitting a three with 25 seconds left. After subsequently being fouled, Fruin must have been rattled by the GVSU marching band, missing the front end of a one-and-one to keep the Sawyers alive.

While senior point guard Jeremiah Ferguson had hit back-to-back threes with 8:40 left, his third three-point attempt fell short before Van Tubbergen collected the ball and dropped it in, cutting the Wildcat lead to two.

Following yet another missed free throw from NMU senior Sam Taylor, GVSU was given a chance to win the game after being down by nearly 20 three minutes earlier, but Ferguson’s last-ditch three point attempt fell short yet again.

Despite the loss, Van Tubbergen had one of his most impressive games of the season, shooting 64 percent from the field while putting up a team-high in points (30) and rebounds (16).

While the junior had yet another quality performance to prove that he deserves a spot on the All-GLIAC first team, the Holland, Michigan, native was disheveled after the game, disappointed that his team was unable to overcome a double-digit deficit in the final five minutes for the second time this week.

“The morale in the locker room is obviously not good after a loss — this one sucks,” Van Tubbergen said. “We have to learn from it and get ready for the big game on Thursday.”

While Wesley was disappointed as well and clearly upset that his team was down double digits late, he complimented his team for the resiliency they showed, making what could have been a blowout a nail-biter.

“First of all, I give them a lot of credit — their defense was really strong,” Wesley said. “They are really playing well together right now and timely shots. I commend our team for not packing it in, with that comeback giving us a chance.”

That big game Van Tubbergen was talking about is on Thursday, Jan. 30, as GVSU travels to Purdue Northwest to take on the Pride at 8 p.m.