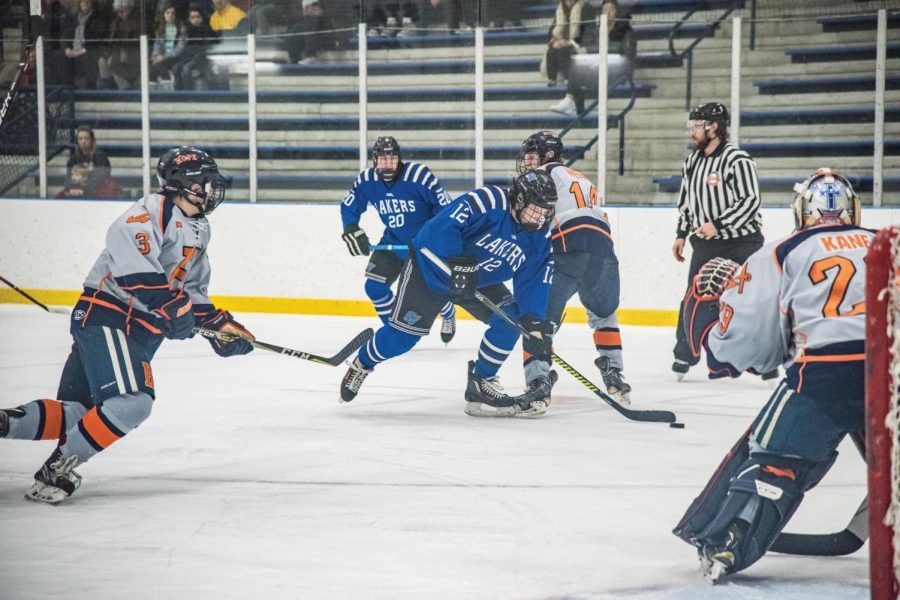 On Friday night, the first of the two game series, the Lakers were out-matched by the Dutchmen. It took the Lakers two periods to score. By the third, the score was already 6-0 and any chance of victory was looking far out of sight.

In the third period, however, the Lakers scored two goals. Junior Daniel Deblouw scored his eighth goal of the season after an assist from senior Zach Resnick. With barely two minutes left in the game Resnick again made an assist, this time to senior Trevor Lassaline to make the final score 7-2.

“We weren’t into it,” said GVSU coach Charlie Link. “We were still adjusting from break. We still weren’t together yet and played a very good team (Hope).”

The team’s next game against Hope was much more competitive however, even though the outcome was the same. Hope scored the first goal of the game after almost half of the first period. Hope forward Kevin Healy was driving the puck forward into GVSU territory. After a battle for the puck, Healy’s shot barely went into the front corner of the goal to give Hope the early lead 1-0.

GVSU’s goalie senior Jared Maddock had a very impressive performance during the first two periods of the game. During the first, he had a spectacular grab in the goal after the puck ricochet off the ice and he caught it in his glove.

Minutes later, he had another grab diving to save the Hope goal for GVSU. Maddock played extremely well in the first period, but the rest of the team started out slow. Hope dominated on offense, setting up their offense in Laker territory and finishing plays with excellent passing. Hope crowed the Lakers goal for much of the period while GVSU failed to get much going offensively.

After another great save by Maddock in the goal, the Lakers scored their first goal of the game in the second period. Junior Benjamin Kowalske scored off an assist from sophomore Timothy Baldwin. On the breakaway after a failed shot by Hope, Kowalske was cutting in the middle of the ice and had an impressive shot right into the goal to tie the game.

“I feel pretty lucky,” Kowalske said. “I have good linemates who made plays and fortunately today I was the on to do the fun part of the play. Definitely good to get on the board and help the team fight back into the game. At that exact moment I was glad to get my stick on it. It was a great play by (Baldwin) to get me the puck.”

GVSU’s tie was short lived. With five minutes to go in the period, Hope’s Noah Arent snuck behind the Lakers goal to slide the puck into the corner of the net to give Hope the lead, 2-1. The Lakers almost tied the game from a shot by Resnick by the blue line, but the puck smacked the top of the bar of the goal.

The second period ended with GVSU still trailing but the period was much more competitive than the first. This team both teams were aggressive on the offensive side of the ice. On defense the Lakers were more combative also, hitting Hope players into the wall instead of trapping them. The more threatening defense seemed to work, as the team kept the game close.

The game was even chippier in the third period. Junior Avery Hill absolutely destroyed a Hope forward, smacking him into against the glass and knocking him to the ground. The crowd erupted after the hit and the Lakers stopped Hope’s offensive play. Moments later, the same Hope player used swung his stick into the lower half of a GVSU player and had to spend the next two minutes in the penalty box. The Lakers however were not able to capitalize on the penalty play.

After GVSU was able to exploit the penalty play, Hope scored the first point of the third. After Maddock blocked a Hope shot off his legs, the puck went right into the stick of guard Austin Kane and scored the goal for Hope while Maddock was still on the ground to make the contest 3-1. The story was almost the same on  the next goal two minutes later, again by a Hope defender after another Maddock save.

The score was then 5-1 after another Hope goal. Gabe Gunneson passed the puck from the corner into the middle to Noah Weigle. Weigle shot the puck between to Lakers defender and past Maddock for the goal. A few minutes later, senior Mitchell Lawton scored the last goal of the game for the Lakers. It was too little too late however, and Hope won the contest, 5-2.

The Lakers played more as a team in their second contest against Hope. After coming out into the ice slowly in the first period, GVSU picked things up and played more aggressively in the second and third. During the third however, the team focused more on their combative style of play then setting up their offense and fell again for the second time in two nights. The GVSU hockey team’s season isn’t over yet, and the team knows what it needs to improve on.

“I thought we played better than we did on Friday,” Link said. “We’re still missing our competitiveness a little bit. Our forwards need to help out a little bit more. We’re going to work on getting in shape a little bit more and try to get our team concept going more.”

The Lakers’ next contest comes against Central Michigan University next weekend.