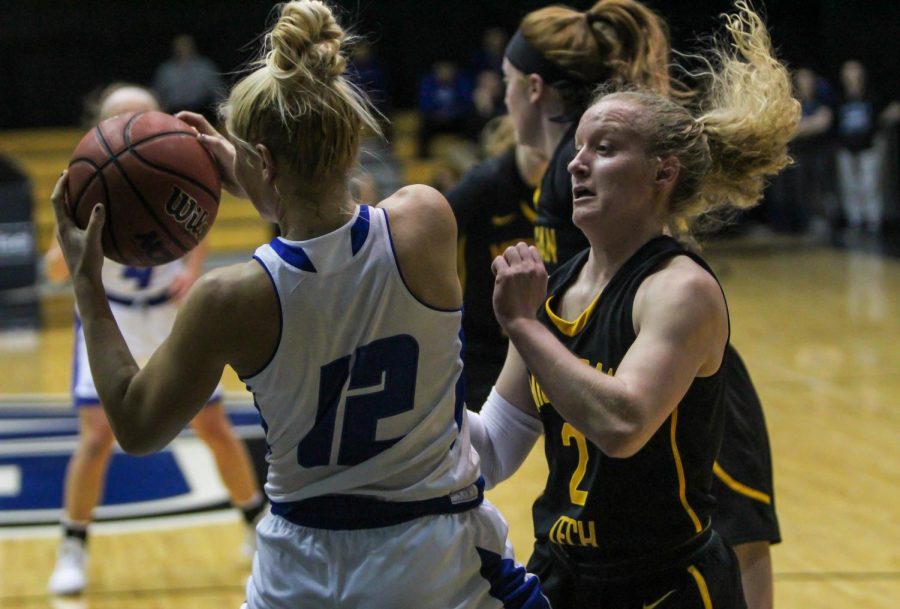 The No. 3-ranked Grand Valley State women’s basketball team cruised to a 70-44 win over Michigan Tech inside the GVSU Fieldhouse Arena on Thursday night. The Lakers improve to 17-1 overall and 9-1 in league play, while Michigan Tech falls to 7-10 overall and 5-5 in the GLIAC.

Senior center Cassidy Boensch had a game-high 20 points and with her basket at the 8:03 mark of the third quarter, the Au. Gres, Michigan, native moved into fifth all-time in program history for points scored, surpassing former GVSU point guard Crystal Zick (1,570 points).

“All of it goes to my teammates, especially in my position,” Boensch said after the game. “I don’t start with the ball, and they do an amazing job of taking care of the ball and getting it down to me.”

The Lakers opened up a 5-0 lead early in the first quarter before Michigan Tech answered and tied the game at 5-5 with 5:14 left in the frame. GVSU would finish the final two minutes of the quarter on a 6-2 run to take a 13-7 lead into the second quarter. The Lakers increased their lead to 31-16 on a pair of three-pointers from Brooke McKinley and DeBoer, bringing their lead at the break up to 35-18.

“On offense, we did a good job as the game went on of getting our eyes up and moving the basketball to get some good shots,” said GVSU coach Mike Williams during postgame interviews. “Then all of a sudden, we got some points there in the second and third quarter to help us along.”

GVSU began the second half on a 15-0 run and held Michigan Tech without a point through the first seven minutes of the third quarter. The Lakers led by a game-high 34 points at 54-20 late in the third quarter before eventually cruising to a 26-point victory by the final buzzer.

With the victory, the Lakers improved to 17-1 overall and 9-1 in conference before their matchup with Northern Michigan University on Sawyer Day, Jan 25.

As is the case so often when playing the GVSU women’s basketball team, opponents can only hold back the tide for so long. The No. 3-ranked Sawyer’s game against the Northern Michigan Wildcats was no different.

The Wildcats came out with energy, consistency and poise in the first quarter, and as NMU guard Elizabeth Lutz hit a buzzer-beating, game-tying three at the end of the period, the Wildcats could feel the momentum swinging their way.

Too bad that was at the end of the first quarter.

In classic GVSU fashion, the Sawyers turned to their top three players, point guard-center combination Jenn DeBoer/Cassidy Boensch and do-it-all wing Maddie Dailey, to pull away in the second quarter. DeBoer beat her defender and drew help before finding Dailey for a layup to open the scoring for GVSU in the second period.

Next, DeBoer would use a pick from Dailey to turn the corner and create space for a pull up jumper of her own from just inside the free throw stripe to give the Sawyers a four point advantage, 15-11. On the following possession, Dailey would block NMU forward Elena Alaix and corral the rebound as the GVSU defense began to dig in for the rest of the quarter.

With 6:39 remaining in the second quarter, GVSU senior guard Victoria Hedemark found Boensch for a 15-foot, 2-point jumper, expanding the Sawyer lead to 17-11.

The Wildcats scored one of their two baskets on the entire quarter in the following possession to move the score to 17-13 in favor of GVSU, but Boensch would again score on a mid range jumper from the left wing assisted by DeBoer to move the Sawyer lead back to six, 19-13.

After NMU scored their last basket of the quarter with just under four minutes to go, the Sawyers hit another gear a minute later behind the ball handling and distribution of DeBoer. With 2:35 remaining in the second, DeBoer would cross over NMU guard Andrea Perez and drive into the paint drawing help defense once again before finding fellow Sawyer Brooke Mckinley on the left wing for a wide open 3-pointer that hit nothing by nylon.

“When I attack hard with my eyes up I try to make the right decisions,” DeBoer said after the game. “If I first look to score I think that a lot of times it opens up someone else for an easy dish or an easy kick-out three.”

DeBoer would wash, rinse and repeat the same strategy with under a minute to go as she again used her ability to get into the paint, draw help defense, and find Hedemark on the right wing for another wide open 3-pointer that widened their lead to 25-15 with 46 seconds left in the second.

As time ticked down at the end of the quarter, DeBoer again found herself driving to the basket around her defender, this time putting up a floater that careened off of the right side of the rim before being corralled on the offensive glass by Dailey, who then hit a fade away jumper from six feet out with 1.4 seconds left to lift GVSU to a 27-15 lead going into halftime.

The Sawyers never looked back from there, a game tying three to end the first a distant memory. GVSU and NMU would trade baskets back and forth in the third quarter before the Sawyers ballooned their lead to 17 in the fourth, which ended up being the final margin of victory for GVSU, 58-41.

Boensch finished the game with 16 points, 10 rebounds and three blocks on 7-15 shooting. Hedemark poured in 14 points and eight rebounds while shooting 3-7 from three-point range. Over her last four games, Hedemark has set season highs in points, rebounds, steals, and three pointers made.

“I feel like I’ve been playing well out there,” Hedemark said after the game. “Definitely by year five you hope to be playing your best and I think I’m getting there. It’s been really beneficial to hear all of the communication from coaches and teammates and it feels good to see that paying off out there.”

DeBoer finished with 10 points, four rebounds and six assists, four of which came in that decisive second quarter. Dailey contributed eight points, 10 rebounds, a block, and a steal as well for the Sawyers.

The victory improved GVSU’s record to 18-1 overall and 10-1 in conference play and marked the fifth straight game the Sawyers. GVSU will travel next to Purdue Northwest Thursday, Jan. 30, and Parkside Saturday, Feb. 1, to complete the season series between the two schools.

Asked what their mindset is going into their next two road games, Williams felt that while GVSU continues to turn in wins with impressive margins of victory, they need to play more complete games moving forward.

“I think we need to continue to build on what we’re doing here, we need to keep trying to get a little bit better each and every day,” Williams said. “I think we’ve hit a lull —we’re not playing bad —but we could play a bit sharper on both ends of the floor and we definitely gotta play well as we head on the road again.”