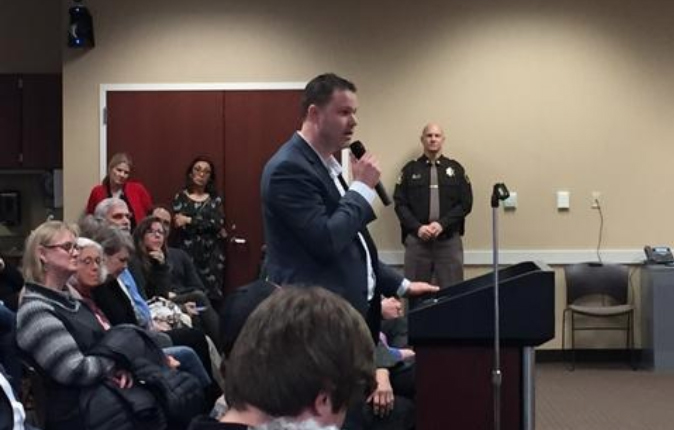 Over 200 citizens argued over the future of refugee resettlement in Ottawa County during the Ottawa County Board of Commissioners meeting Tuesday, Jan. 28.

After listening to three hours of impassioned discussion, the Board of Commissioners unanimously approved ongoing refugee resettlement in an 11-0 vote.

Ottawa County joined local governments across the country deciding whether to accept refugees this month. President Donald Trump issued an executive order requiring local governments to sign a letter of consent allowing agencies to continue refugee resettlement in their community in September of 2019.

The speakers split evenly between refugee advocates and detractors. The debate kicked off with Ottawa County resident Kim Greenland, who worried that Ottawa County lacked the resources to care for refugees.

“The reality of what we’re getting is not to be taken lightly,” Greenland said. “We’re not Santa Claus. We don’t have a never-ending supply of money.”

Refugee advocates responded by saying that the federal government pays for refugee resettlement. They also brought up studies showing how refugees fill holes in the labor market, start small businesses and contribute to the tax base.

Grand Haven Mayor Bob Monetza made the case that refugees contribute significantly to the local economy.

“I’ve seen refugees come in and become productive, law-abiding members of the community,” Monetza said. “This is a win.”

The focus of the conversation often veered away from practical issues toward more philosophical questions. Matters of contention included whether Ottawa County has a moral obligation to host refugees and how the arrival of additional refugees would affect the culture.

Christianity played a prominent role in the proceedings, with pastors sharing their church’s experience sponsoring refugees, as well as Bible verses appearing frequently in comments made by speakers of both sides.

Bing Goei, a small business owner, former State House candidate and Indonesian refugee, called for the commissioners to set aside their political beliefs and consider their religious convictions.

But for some audience members, the political reality of the decision could not be ignored. Rob Davidson, a former Congressional candidate, claimed that the commissioners feared how their vote might affect their chances of re-election in a conservative county.

“The elephant in the room is that ten of you are Republicans,” Davidson said. “You get to the point in life where you say something is right or wrong.”

Several speakers requested that the commissioners table the vote and conduct a study on refugees, citing concerns about the security of the vetting process and the potential impact on the school system and government services.

Bethany Christian Services, a refugee resettlement agency, has resettled 28 cases in Ottawa County since 2015. The 75 Afghani and Congolese refugees who resettled in Holland through these cases received support from 80 churches and several families.

Under a Trump administration ruling that took place last year, the total number of refugees admitted into the U.S. dropped to 18,000. According to the United Nations High Council for Refugees, there are 25.9 million refugees around the world.