What is the American Dream?: A closer look 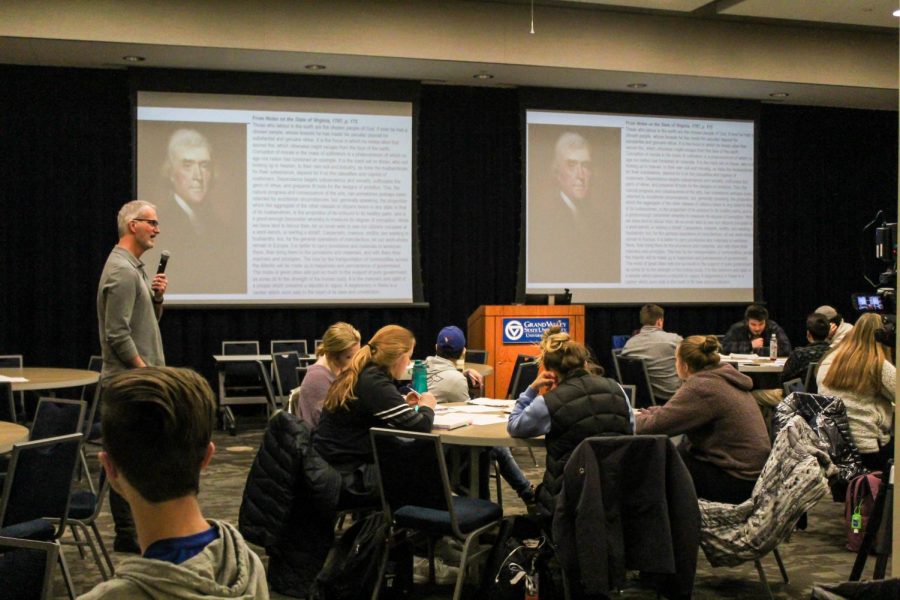 CSLC civic engagement associate Jane Johnston said that throughout the winter 2020 semester, Democracy 101 events will be deconstructing the “American Dream” by analyzing what that dream is and where it came from.

“The way that we set up the series is that we’re starting off with a few sessions on the history of the American dream,” Johnston said.

According to the CSLC website, The Mythology of the American Dream, hosted by GVSU professor Steve Tripp, was the third event in the winter 2020 series.  The event was held from 6-8 p.m. on Jan. 29 in the Mary Idema Pew Library Multipurpose Room.

“For the mythology of the American dream, we really wanted to focus on how this idea came to be and how it has evolved over time in our country,” Johnston said.  “Steve Tripp, who is a history professor here, specializes in American history, so he specializes in all of this kind of stuff.”

“What I’m doing is providing that sort of deep historical context,” Tripp said. “As a historian, what I try to do is to help to explain that our dreams and our ambitions, those basic questions of identity, the concepts the dream encapsulates, are historical and that what we define as the good life, what we define as aspirational, is rooted in historical experience.”

Throughout the event, Tripp provided examples of art, writing and events from throughout history that represented perceptions of the American dream at that time.  Tripp said that these examples, stretching from the Jeffersonian-era to today, show how the dream has evolved over time.

“When we talk about sort of the Jeffersonian Republic, he had this notion that everyone in America had the potential to be a Freeholder, they could own their own land and work their own farm or be an artist and make things for other people in the community,” Tripp said. “His belief was that if everyone had that sort of independence, it would mean that no one could influence their opinions and everyone would be about equal. We still have faint notions of that, but where I’m going with this talk is to say that we discarded much of that.”

Tripp said he hopes that learning more about the American dream at his event will inspire students to take a critical look at their goals and actions in life to see how they may have been motivated by American culture and ideals.

“We all have a tendency to sort of walk in step with the popular culture and with the expectations of what our family wants us to do or our significant other wants us to do,” Tripp said. “The other (goal) is to think critically about where we are as a society. For many of us, we’re sort of following the life of the super-rich even though we can’t afford it. Is it really a realistic goal?”

Johnston said that she was impressed by Tripp’s knowledge of history and left the event with a new perspective on what the American dream is.

“Steve’s presentation really helped me understand where the dream started out and the historical context behind that,” Johnston said. “We started out talking about early America and these ideals and characteristics that most Americans wanted to strive for, but with industrialization, commercialization and consumerism over time, it flipped. Just getting a better understanding of the historical context and how that has shaped where we are now is really beneficial for me.”

A new Democracy 101 session is held every Wednesday from 6-8 p.m. For information about upcoming events, visit the CSLC’s website.