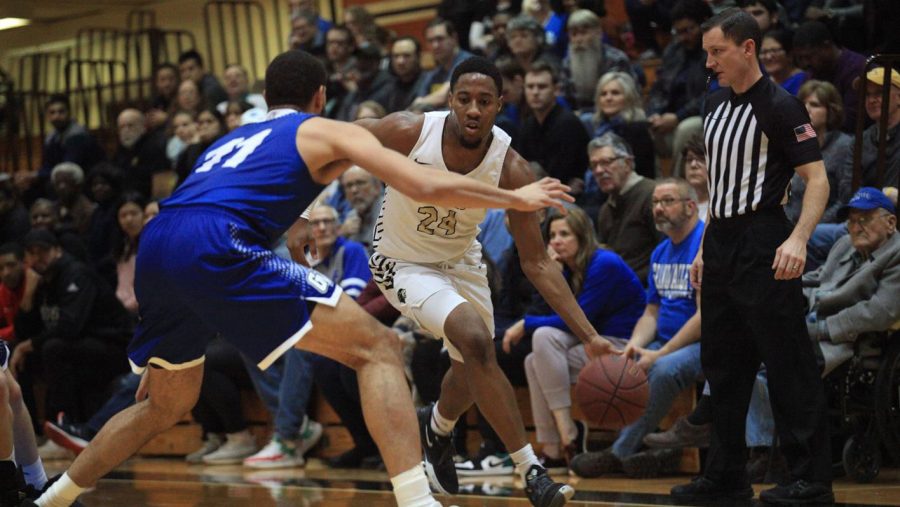 The 2018-19 season was considered a successful one for the Grand Valley State men’s basketball team, as despite touting a fairly average record of 16-12 in the regular season, they beat the top three seeds in the GLIAC tournament on the way to a conference tournament win and a NCAA tournament berth.

As solid as the finish of that season was, this year’s Laker squad might be even better, as they’ve already earned their 17th and 18th wins of the regular season against Purdue Northwest and Parkside respectively to improve to 18-3 on the year, good enough for first place in the GLIAC.

The team’s 17th win of the season came in an 82-78 win over the Pride of Purdue Northwest. With starting juniors Jake Van Tubbergen and Christian Negron dealing with foul trouble, freshman Marius Grazilius had a career night, fighting for 10 points and grabbing eight rebounds on 3-6 shooting.

“(Grazilius) was ready to step up off the bench in that moment, and that really helped us to victory,” said GVSU coach Ric Wesley. “(Purdue Northwest) didn’t have a lot of size, so he was able to get six offensive rebounds, and he was really composed in there and used some nice up-and-under moves to get those in the basket.”

A 10-0 run by GVSU to start out Saturday’s game against Parkside was ultimately the margin of victory, as the Lakers were able to overtake the Rangers, 67-57.

Wesley said he was proud of the defense his team had on Parkside’s Brandon Hau, a redshirt sophomore who averages 12.1 points per game on 40.1 percent shooting from three. Even though he was able to total 10 points, he had to take 10 shots to get there, and the Lakers did a good job closing on his three missed threes.

“They haven’t a very good three-point shooting team, but Brandon Howe is a very good player,” Wesley said. “I thought our defense was really good. It was a lot of activity up top, so we were just trying to disrupt the flow of the ball. We wanted our defensive energy to match their offensive energy, and for the most part, I thought it was pretty good.”

While Hau and junior Jamar Evans were able to connect on back-to-back threes to cut the Laker lead to six with 3:52 remaining, senior Ben Lubitz (13 points in the two games combined) hit a deep ball of his own. Ferguson led the team in scoring again with 18 points, but Van Tubbergen followed close behind with 17 points, shooting 6-of-8 and corralling eight rebounds.

While Wesley said that neither win was pretty, he argued that no win comes easy in the GLIAC, and he is just happy to get road wins against two conference opponents.

“It’s a tough league and every game is a grind-it-out affair,” Wesley said. “There are not going to be any more blowouts this year. It’s the GLIAC; these games are going to come down to the last 10 minutes every time. We’re not in the dog days, we’re in the home stretch, everybody in America is tired. It’s a war, it’s a battle and whoever comes out with the energy is going to win.”

Hopefully the Lakers come out with energy this week, as they stay home for GLIAC duels with Wayne State and Ashland.