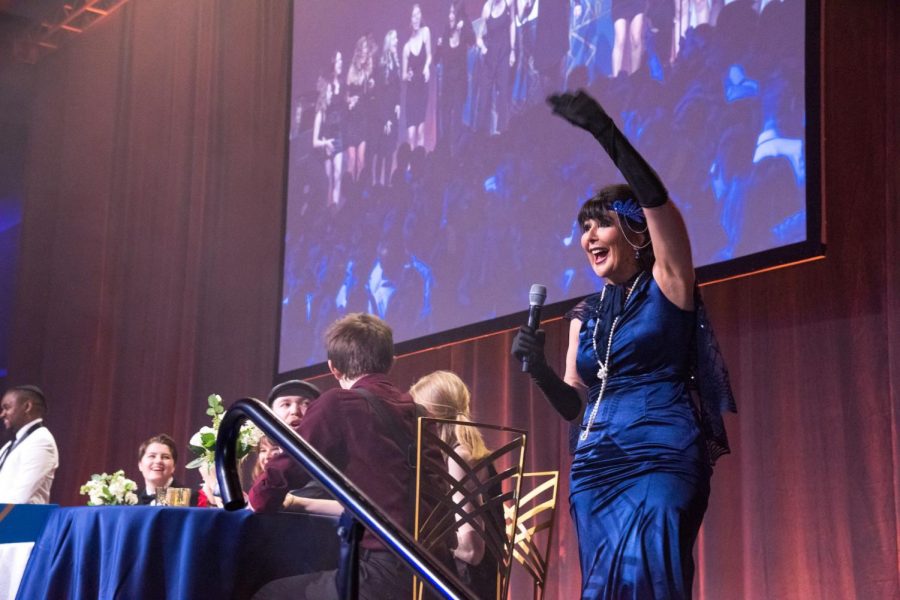 “I was named president of Grand Valley just before the Presidents’ Ball got cancelled because of the weather,” said President Philomena Mantella. “I know how disappointing that was to everybody, so I hope this year has kind of a special purpose because not only are we keeping it in a time of change, but because people have missed it.”

GVSU holds the Presidents’ Ball every year, hosted by the presidents of the university, the Student Senate and the Campus Activities Board. The event begins with a banquet where Faculty Awards are presented, followed by the ball itself, where students come together to celebrate the university and dance the night away. As this is Mantella’s first year at the university, this January marked her introduction to hosting the Ball.

“We’ve been having a good time planning with her and catching her up on how this tradition goes,” said Jess Fillmore, President of Campus Activities Board and Director of Presidents’ Ball. “This is one of the biggest social events she has been able to go to, so she is really excited to get to talk to everyone and get a feel for this tradition that’s held closely to the hearts of a lot of students and faculty.”

Mantella continued the existing traditions of the Presidents’ Ball, but she did add a few extra touches of her own.

“The Presidents’ Ball is a very successful event,” Mantella said. “It’s become a signature of Grand Valley, so we don’t want to depart too far from that history and legacy.”

But unlike GVSU presidents of the past, who gave speeches introducing the Ball on their own, Mantella elected to share the stage with her fellow presidents and co-hosts: Fillmore and Eric-John Szczepaniak of the Student Senate.

“Rather than just the president of the university, these are two people that make things happen, that are exerting leadership, and I think it’s a really important statement to have the three of us speak together,” Mantella said.

Mantella has been in higher education her whole life and has been thrilled to lead GVSU. There were several characteristics that drew her to this campus over others.

“The strength of the community, the strength of the learning experience, the great price point, the way in which the Grand Rapids community helped build the university,” Mantella said. “The aspiration to keep moving and making a greater impact was really inspiring to me and helped bring me here.”

As a result, Mantella has an abundant amount of school spirit, as was demonstrated Friday night at the Presidents’ Ball as well as in her everyday wardrobe, which is decked out in blue. She represents GVSU everyday through the school’s colors, from her blue lipstick to her blue nails.

“Being the president of Grand Valley, I see people when I am out casually and when I’m on the job,” Mantella said. “So what I try to do is always have them understand who Grand Valley is when they understand me. So I have been wearing the colors just about everywhere I go, so I represent the university and people see us.”

Mantella plans on keeping the Presidents’ Ball for years to come, and for Lakers to continue to celebrate the university together.