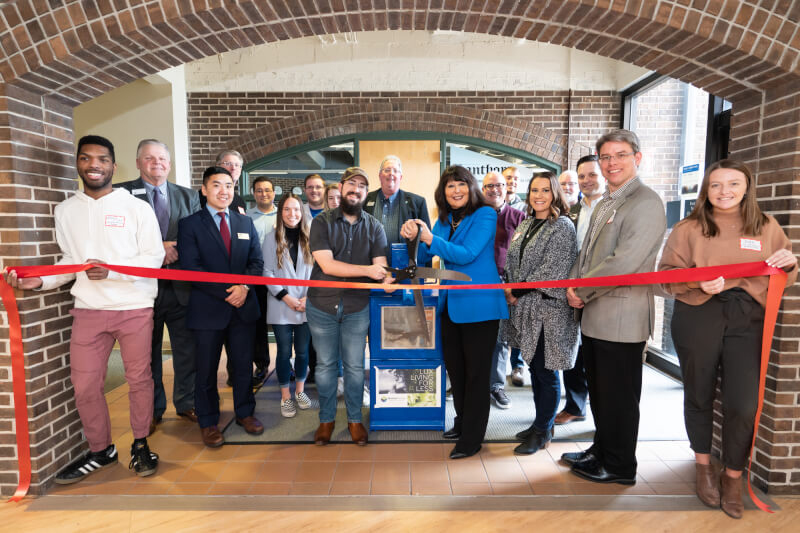 The Grand Valley Lanthorn, Grand Valley State University’s student newspaper, officially instated its 100th newsstand during an event held in its office. The newsstand will be installed this February by the commuter lots behind the Standale Fire Station in Walker, Michigan. This fills in the Lanthorn’s reach, which is as far West as Allendale’s Family Fare to GVSU’s health campus in Grand Rapids.

The Lanthorn held an event to honor the occasion, with representatives from GVSU, Allendale and Walker in attendance. Former Lanthorn adviser of 28 years Larry Beery said at the event that the newsstand represents an expansion of GVSU, with its presence reflecting GVSU’s growth.

“The University used to just be here, with the Great Lakes and buildings in Allendale,” Beery said. “The Lanthorn has growth with the University.”

In attendance at the ribbon cutting was GVSU President Philomena Mantella, who mentioned her support of not just the print product of the newspaper, but also the multimedia product as a whole.

“I’m pleased to see distribution and print is being maintained,” Mantella said. “It’s great to support the independence, the ethics and the quality of this newspaper.”

The additional newsstand will serve more than just readers. While students who commute or take the bus may especially benefit, advertisers will as well.

“Advertisers want a larger audience, so we are growing to support their commitment to reaching our readers,” said Advertising Manager Jesse Becker. “We want to offer advertisers better print and online delivery of their ad message, and increasing our number of locations will help accomplish this for them. Plus, this newsstand has a poster placement opportunity which is highly visible for ads.”

Editor-in-Chief Nick Moran said the expansion represents more than increased print coverage. This school year, the Lanthorn has released a podcast series, a new website, a new look to its newspaper and will be releasing an app this month. All the changes being made are focused on creating a wider reach for Lanthorn readers.

“I think that this has come at a point in our history that we’re expanding to a multimedia platform and so this is just one step out of very many that we’re taking to reach our audience no matter who it may be,” Moran said. “This gives us the chance to really showcase the hard-hitting journalism that we do at an even broader level — maybe at this one newsstand, but it also is reflected on our website, soon to be our app and our podcast.