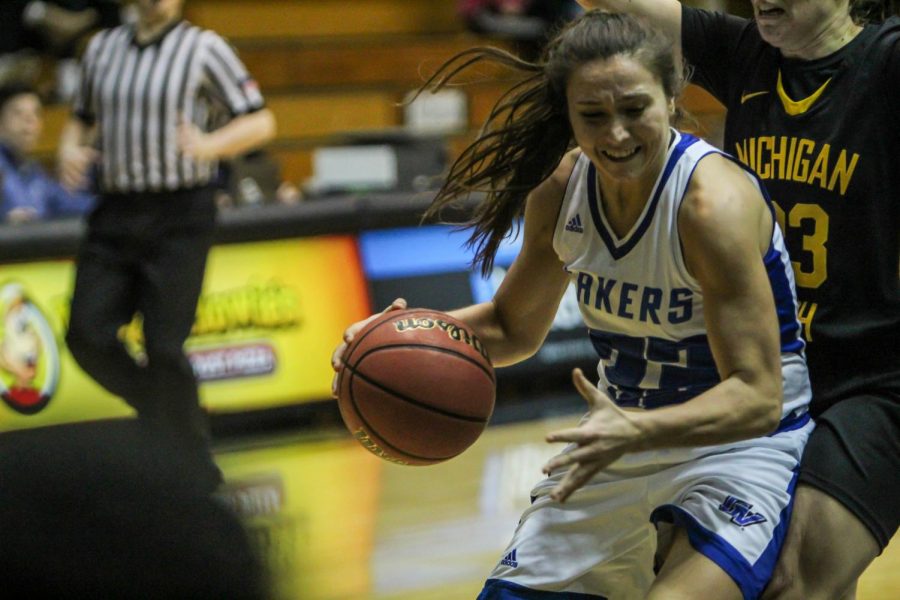 The No. 3 ranked Grand Valley State University women’s basketball team continued playing their lights-out defense, holding their opponent under 45 points for the sixth consecutive game, in a 64-42 win over Purdue Northwest on the road Thursday, Jan 30. The Lakers extended their winning streak to six games while also improving to 19-1 overall and 11-1 in GLIAC play.

GVSU came out sluggish in the first quarter, with neither team gaining much of an advantage early. The Lakers led 10-6 at the end of the quarter before going on a 11-4 run to begin the second quarter, which allowed GVSU to seize a 21-10 lead with 6:38 left in the half.

Purdue Northwest was held without a basket for the final 4:04 of the half and the Lakers took a 33-14 advantage heading into the locker room at halftime.

Their lead continued to grow in the third quarter as GVSU pushed the margin to a game-high 31 points at 49-18 with 1:45 remaining in the third frame. GVSU cruised in the fourth quarter to their sixth win in a row and completed the season sweep of Purdue Northwest.

The GVSU women’s basketball team completed a season sweep of Parkside on Saturday, Feb. 1, defeating the Rangers 82-49 in their second and final conference play of the week. The Lakers improved to 20-1 overall and 12-1 in the GLIAC, while Parkside falls to 12-9 overall and 9-4 in league play.

“I think it’s one of the better games we’ve played all year,” said head coach Mike Williams. “I thought offensively we played with great tempo, we got good shots, made those good shots — which always helps — then defensively parkside is a good screening team so I thought we did a good job moving around screens and defending against penetration (in the paint).”

Following the win, the Laker seniors (four-year players) are now the winningest class in program history, breaking the school-record of 98 wins in four years set by Crystal Zick and Erin Cyplik (2004-2008). Jenia Laporte, Jenn DeBoer, Victoria Hedemark, Maddie Dailey and Cassidy Boenschhave compiled a record of 99-20 (.831) throughout their career.

“This is a group — those seniors — that have paid their dues, waited their turn, and invested into winning,” Williams said. “When I say winning, too, I don’t mean investing in becoming great individual players, I mean investing in becoming a great group of team players and when you go about that in the way they have, you have a chance to be as special as this group is.”

Taugher has been making a larger impact of late as the graduate transfer from Northern Kentucky continues to become more accustomed to her Laker teammates, which has not been lost on head coach Mike Williams.

“Taryn’s really starting to come into her own,” Williams said after the game. “You know early on she came in and was concerned about not doing too much, but now she’s getting more comfortable in her role, shooting on balance and not off one foot while hunting her shots, especially from the three-point line.”

As a team, the Lakers shot a blistering 57.4 percent from the field and knocked down 14 of 20 attempts from the charity stripe. GVSU also dominated Parkside in points in the paint (46-26), points off turnovers (23-8) and bench points (18-9).

The game began fairly even with the two teams trading baskets throughout the first five minutes of the contest before the Lakers ended the quarter on a 13-4 run to take a 25-15 lead into the second frame. In the second quarter, GVSU put the game out of reach, going on a 14-0 run to increase the lead to 39-15 with 5:17 remaining in the half. The Lakers led 50-27 at the break.

GVSU’s offense cooled off in the second half, but still managed to push the lead to a game-high 31 points at 60-29 toward the end of the third. After holding Parkside to just 22 points in the second half, the Lakers have now allowed under 50 points for the seventh straight game.

The Lakers will welcome Wayne State Thursday, Feb. 6 and No. 2 ranked Ashland Saturday, Feb. 8 to the GVSU Fieldhouse Arena next week for a pair of key matchups in GLIAC play.

“We’ve been playing with pretty good tempo recently, we’ve gotten up and down the floor pretty well so continuing some of that is key,” Williams said. “Then we have to continue to dig in defensively and take away what the other team wants to do. Combine that with finishing games, especially on the glass, then I think we’ll be in good shape in the near future.”