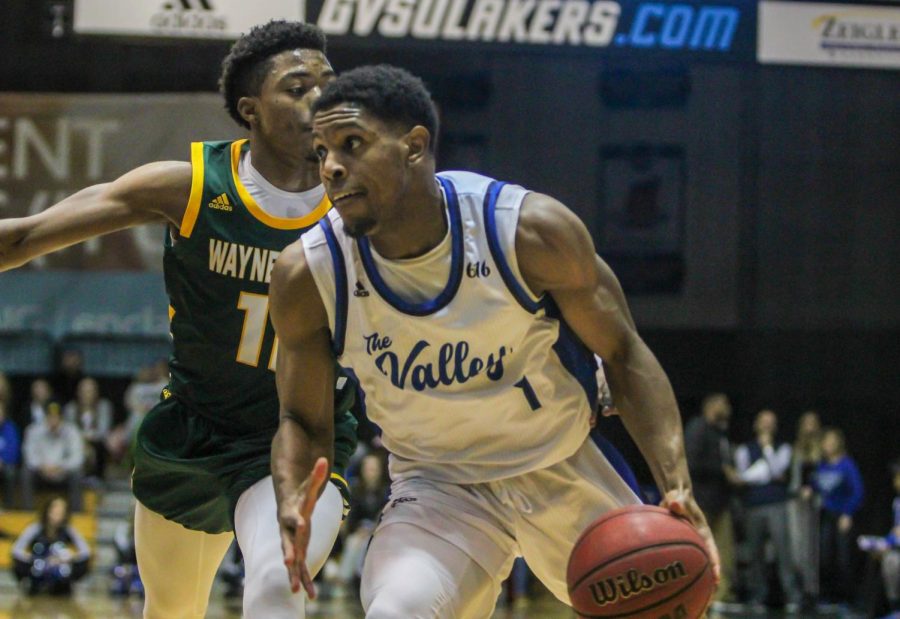 The Lakers were able to outlast the Warriors 83-70 Thursday night, Feb. 6. The win was their 19th of the season, equaling their total from last year, with six games still remaining.

GVSU’s mental toughness was key down the stretch. They started the game out slow, going down 16-7 early in the first half. Then, right when they needed it, junior guard Isaac Gassman hit a big three-pointer. This ignited a 21-4 run that allowed the Lakers to take a sizable lead. Gassman said it’s key for him to see the first basket go in.

“Yeah it’s huge, even if it’s like a lay-up or… that three to start off,” Gassman said. “As a shooter, once you score and see one go through, it makes you more confident for the rest of them.”

GVSU was a little sloppy to end the half, but was still up by 11 with a score of 41-30 entering halftime. Wayne State would make a comeback in the second half. Senior point guard Brailen Neely led the charge with 12 assists.

“Neely is one of the toughest guards in our conference,” Wesley said. “He creates a lot of problems from his ability to score, as well as passing. He really (has) a terrific combination.”

Wesley also mentioned that Wayne State was without senior guard Karim Murray in their last meeting, a 71-64 win for the Lakers.

He’s an outstanding player, a fierce competitor and a tough match-up as well,” Wesley said. “With him in the lineup, we expected it to be a tough game.”

“We lost our focus here a little bit, and (LJ) DeWolf is an excellent three-point shooter and that’s certainly the one thing he does,” Wesley said. “We let him get away with three straight threes, which is just inexcusable.”

After DeWolf notched his third three of the game, GVSU called a timeout. Down by three points with 11:09 remaining in the game, Wesley urged his team to focus on their fundamentals.

“We lost our focus a little bit offensively, so it was more like, ‘Hey, let’s tune in defensively here a little bit’,” Wesley said. “And offensively, just continue to share the ball and not settle for the first tough shot — let’s get a great shot. Also, coach (J.R.) Wallace gave a few choice words of encouragement which I think helped.”

To help with the comeback, junior forwards Christian Negron and Jake Van Tubbergen have been focusing on their size advantage and practicing getting the ball inside more often.

“Even if we’re not scoring, I think we both draw a lot of attention and try to open up our shooters,” Negron said. “We have an emphasis on getting the ball inside and playing inside-out, which just opens everything up for our offense.”

Although they fell behind by three points, the Lakers were able to seal the win with the help of their rock, Van Tubbergen. He recorded 21 points and 10 rebounds, his twelfth double-double of the year. When asked what has made the difference this year, Van Tubbergen credited consistency.

“We come out every night this year and we know what we have to do to win,” Van Tubbergen said. “We do our very best to go and do that and I think it shows with some of the games we’ve played in the past where we’re down big. We try to come back and will our way to win, and you saw tonight they made a run and we just focused, got back to it and came out with a double-digit win.”

On the fun side of things, the Lakers wore a brand-new jersey for the game. Gassman, Negron and Van Tubbergen all seemed to have a soft spot for the jerseys already, saying that they hope they become the regular jerseys. Wesley even joined in on the fun.

“We appreciate it,” Wesley said. “The marketing people do great for crowds here… They do really help bring that extra energy to the building.”

Always thinking about the next one, head coach Ric Wesley, in his 16th year, had glowing things to say about the Lakers’ next opponent, Ashland University.

“You know, quite a story in Ashland,” Wesley said. “A team that was picked to win the South Division but they had a really brutal schedule to start the season off. And it kind of took its toll on them, and I think they got kind of down and got off to a rough start. They’ve really found their way here as of late, really playing great basketball.”

GVSU Men’s Basketball, ranked no. 15 in the nation, takes on the Ashland Eagles at the Fieldhouse Saturday, Feb. 8 at 3 p.m.