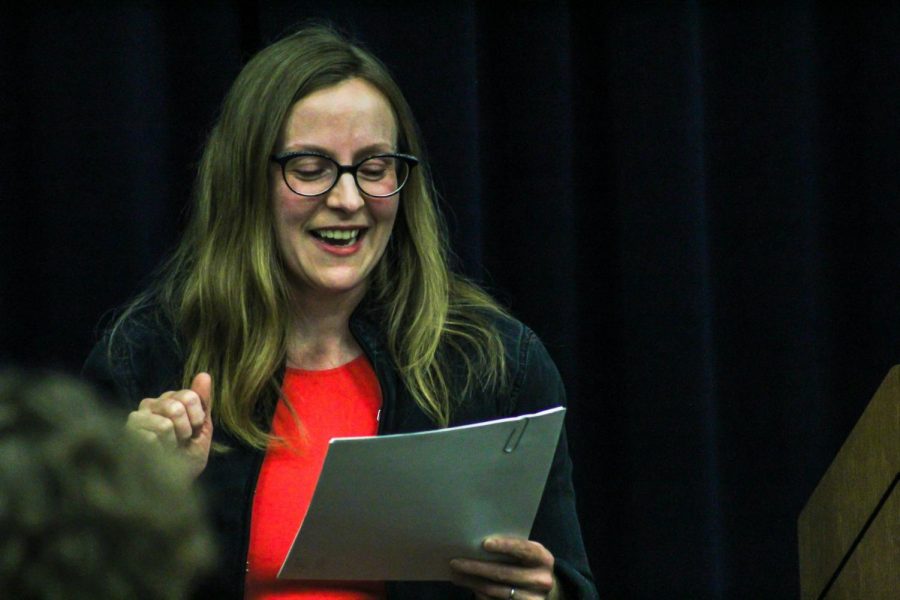 The event began at 6 p.m. with an introduction of the authors by event coordinator and associate professor of the Writing Department, Amorak Huey. This was Huey’s first year organizing the GV Writers Series following his predecessor, Todd Kaneko.

Huey and his colleagues determined which writers to bring to campus, with five to six writers being brought in for the series each year. Despite the ability to bring in writers from far and wide, Huey was glad to showcase authors from GVSU.

“As a fan of their work myself, I was very much looking forward to hearing them read. It’s always a treat to watch a writer perform their own work and to hear the voice behind the words,” Huey said. “I love that the Writers Series, in general, offers our students a chance to interact with world-class writers.”

Each author was introduced by one of their current students and had about 25 minutes to read and give the audience insight into their respective pieces.

Both writers presented their newest work: Beth Peterson reading from an essay she had been working on for the past few weeks and Caitlin Horrocks presenting her most recently published novel, “The Vexations.“

The styles between the two authors differed, as Peterson writes creative nonfiction and lyric essays, while Horrocks writes fictional novels as well as some nonfiction.

It is not just their writing that differs, but the reason they became writers in the first place.

Peterson chose the path of writing due to the different essays she read and the longing they sparked to discover more of herself.

“I knew I wanted to be a nonfiction writer after reading an essay called ‘Goodbye to All That’ by Joan Didion. The way the words moved on the page made me feel and think differently,” Peterson said. “I probably read that essay a hundred times, learning more each time about Didion and about myself.  Soon, I began to write my own nonfiction.”

But, Peterson’s way of writing was not just a journey of self-discovery. It was also an exploration of the physical realm.

“I began writing (“Dispatches from the End of Ice”) because I wanted to know what to do when the ground I was walking on began to dissolve, literally and metaphorically. Most of my work is driven by questions like this one,” Peterson said.

Horrocks, on the other hand, had always dreamed of being a writer and didn’t stop until she got there.

“I was a bookworm, and just didn’t really think that I could be the person making the books. It felt like wanting to grow up and be a unicorn, it just wasn’t going to happen,” Horrocks said. “But I just kept writing and then eventually didn’t quit and started publishing and here I am.”

But, no matter how different their work and motivations may be, both authors love one another and their works.

“I admire Beth enormously. She said that she’d been working on this book for nine years and I think I’ve been looking forward to this book for almost that long,” Horrocks said. “I think her work is just dense and smart and insightful in all the best ways.”

Peterson feels the same way about Horrocks’ writing and said she loves the way that her characters are written.

“I love Professor Horrocks’ work. Caitlin has such an interesting and compelling way of creating characters so that they feel not only historically accurate but real,” Peterson said. “I can see them and hear their voices as though the characters are real people, right there with me. In both her fiction and nonfiction, she pushes the form forward, and makes the reader better for having read.”

Horrocks is an associate writing professor at GVSU and was the fiction editor of the Kenyon Review from 2012-2018, where she still remains on the advisory board . Her short story collection “This Is Not Your City” was a New York Times Book Review Editor’s Choice and a Barnes and Noble Discover Great New Writers selection. Her work can also be found in The New Yorker, “The Best American Short Stories,” The PEN/O. Henry Prize Stories, The Pushcart Prize, The Paris Review, Tin House and One Story.

Peterson was a wilderness guide before she began writing, and is currently an assistant professor in the GVSU Writing Department. Her essays have made appearances in Fourth Genre, River Teeth, Mid-American Review, Post Road, Passages North, Flyway, Assay, The Pinch and other publications.

Huey felt that the event was an amazing opportunity for GVSU students to get exposure to the success of the authors and to witness their professors in a different light.

“It was a chance for our students to see their professors in a new context: not only as teachers of writing but also practitioners. Both of them are really excellent, thoughtful writers and storytellers, and it was a great reading,” Huey said.