Acoustics and coffee in Area 51 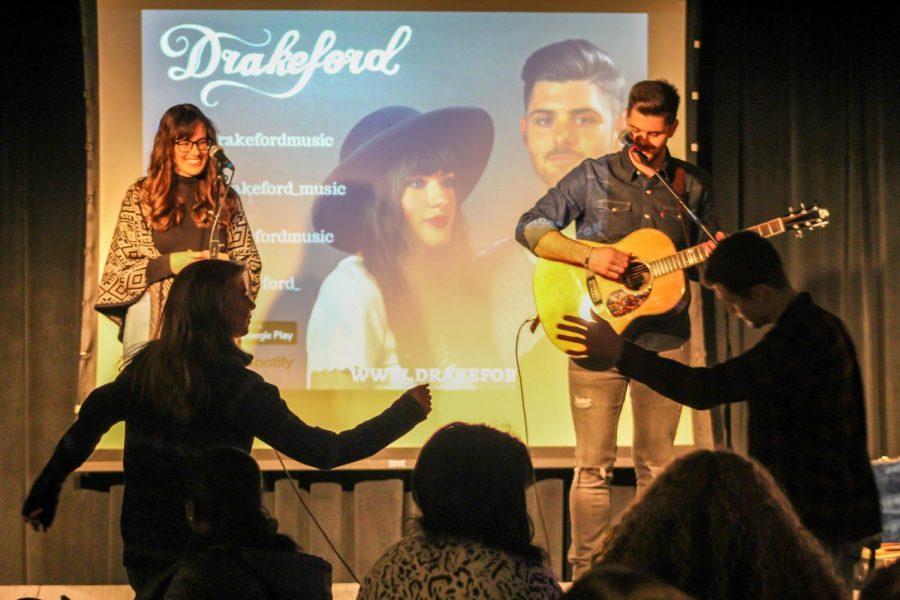 Area 51 in the Kirkhof Center was transformed into a quaint coffee shop for the night as the husband and wife duo Drakeford strummed their guitars beneath intentionally written lyrics.

The Coffee House Concert series is put on by the Campus Activity Board (CAB). As of last semester, the concerts were moved from the Cook-DeWitt Center to Area 51. CAB’s Director of Live Music Terry Jones said they chose Area 51 because of its relaxing environment which allows people to come and go as they please. The first show of the semester was Drakeford on Tuesday, Feb. 4.

Lucy-Jayne Lanier, a Brit, and Drakeford Lanier, an American, were far from home when they crossed paths in the small Central Asian country Kyrgyzstan. They were both members of a traveling street performing group. Drake was getting his start as a folk artist and Lucy-Jayne joined the group as a dancer. Once they married in 2015, music became their full-time gig.

During the concert, they warmed the audience’s hearts with a slice of their love story. Although they met on tour, there was a strict rule set by the team that kept them from dating. Since they were not even allowed to talk about how they felt, Drake got creative and wrote a song that expressed how he was feeling about Lucy-Jayne at this confusing time. When she first saw it, Lucy-Jayne said she was unsure but hopeful that the song was about her. This song is titled “Clarity” and they followed their story with a performance of it.

“Songwriting is basically just living and then reporting how life is going in a poetic way,” Drake said.

The couple’s faith is one of their main motivations to continue making meaningful music. While they do not play Christian music or perform in churches, they said there are parallels to the positive messages in their music and the values within their faith.

Drake said he hopes listeners feel encouraged when they hear their music. Themes present in their music promote an optimistic attitude and outlook on life.

“We actually write them (songs) to ourselves because we need to hear it. If it feels meaningful enough to be something that we want to be spoken to us, we want to speak that into other people too,” Drake said.

Towards the end of the set, Drake paused and told the audience that he was going to play a song that he was not planning on playing. In fact, he said he rarely plays this song because it takes a certain kind of audience to listen to it the way it was intended to be listened to. Drake said that he saw the GVSU students as the kind of audience that was open to listen to and understand the messages he is trying to portray through the song’s lyrics.

“Not everywhere you go is a listening environment where people are willing to listen to the words that you write,” Drake said. “Tonight was incredible because there were a couple of moments where it got really quiet and there are some really intentionally written lyrics that I feel were communicated and received.”

The duo’s plan is to release new music in 2020. They are yet to record in the studio, but all of the songs are already written. The new music they plan to release is themed differently than a majority of their other songs. Lucy-Jayne said their last couple of years have been very difficult. The music they wrote during this time means a lot to them because it accurately reflects their reality and what they went through.

“We want to write songs that are real in any season we’re in,” Lucy-Jayne said.

Drakeford was the first Coffee House Concert of the semester, but there are more to come. In March, the band Sawyer will be next to perform at Area 51 for the concert series.