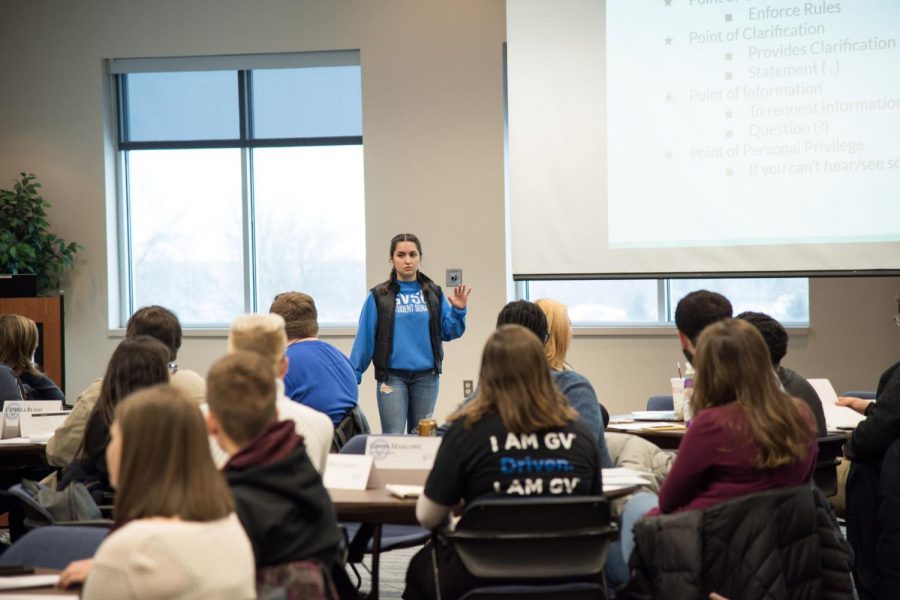 Taking a break from their usual meeting agenda this week, Grand Valley State University’s Student Senate focused on their own internal improvement. Once a semester, the students hold a meeting to go over the rules of the senate and plan for improvement.

The meeting started off strong, introducing two new students to the Senate: Kalob Bellows in the Public Relations Committee and Shireen Salam in the Campus Affairs Committee. Both were unanimously accepted.

In his report, President Eric-John Szczepaniak announced that Student Senate had been approved to speak at the quarterly Board of Trustees meetings. This new privilege, approved by Chair Mary Kramer, gives the Student Senate four times as much speaking time as they had last year.

Inservice took up the majority of the meeting, refreshing the senators on Robert’s Rules, parliamentary procedures and appropriations before leading into expectation of the individual committees.

Robert’s Rules are a series of rules which outline certain policies that can be used during senate meetings.

A commonly used rule is abstaining from a vote, which is how a senator would vote if they could personally gain something from the motion being passed.

Another rule, though not used as often, called “exhausting the speakers list,” states that no additional people can be added to the current list of speakers on a proposal.

Parliamentary procedures explain respectful behavior of senators while others are presenting, though these procedures are often used outside of the senate floor.

Senators even have a chart that outlines whether or not the person requesting that particular motion can interrupt the speaker, need a second or if it is up for debate.

Student Senate also briefly touched on Appropriations, which are the funds and budgeting of not only the senate but other organizations as well. Not many members outside of the Finance Committee share much about the financial side.

Inservice finished with the committees grouping together to come up with expectations for the other committees for the future. They took fifteen minutes to brainstorm before sharing with everyone.

Student Senate Executive Vice President Kelly Dowker led this activity. She produced a blue padded cube microphone for the senators to use. They spun a wheel to decide which group would receive suggestions first.

The wheel chose the External Relations Committee (ERC) first and the other table launched the cube between them to share their thoughts and expectations for that committee.

When all of the tables had finished sharing, the ERC sent a member to spin the wheel and the cycle continued. Fortunately the microphone was padded, as it was dropped and bounced across several tables.

After all of the committees had taken their turn, they had another ten minutes to discuss what they were going to do with what the other senators thought.

Many committees recognized that they all had a lot to work on and are focusing on improving.

Elections for Student Senate is coming up near the end of March. Packets for students who would like to run, which require 100 student signatures and 2 faculty members, are due on March 20. Voting begins on March 23 and closes on March 29. Anyone who is interested in running can pick up information in the student senate office in 0040 Kirkhof Center.