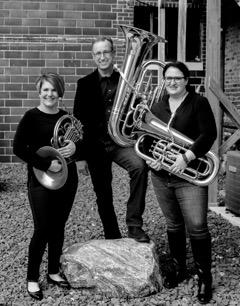 Brass trio group Trio di Velluto took center stage at the Sherman Van Solkema Hall in the Haas Center for Performing Arts Friday, Feb. 7 at 7:30 p.m. The group opted for an informal performance, and the small venue was perfect for interacting with audience members.

Translated from Italian, the name Trio di Velluto means velvet trio, and the group lived up to their name throughout all six pieces they performed. The first piece was Three Transcriptions for Low Brass Trio, which was followed by Triangles by John Stevens and Soundspells by Mark Scott before calling an intermission. Keeping with the informal nature of the concert, the group held a Q&A with audience members in lieu of a traditional intermission. There was no set time for the Q&A and any and all audience members were free to ask whatever they liked.

Students studying music at GVSU made up the majority of the audience. “It’s great to be a model for them and to talk with them and answer their questions,” said Cranson.

“We love this piece. It’s very fun to play,” Cranson said. He went on to explain how they got their name after this piece because of how it demonstrates the warm nature of their instruments.

La Mia Storia is the most recent piece Trio di Velluto had commissioned for them, and they played it for the first time a few days prior to the tour.

During the Q&A, an audience member asked what they enjoy most about being in a trio in comparison to an average sized ensemble. Cranson responded with, “We can very much blend together and do our own parts. It’s very cool.”

Cranson and Laursen are married and live in South Dakota, while Lipton resides in Arkansas, so the trio only get to see each other a few times a year. Lipton said that her favorite part of this tour has been, “just getting to see my friends.”

Lipton said that this performance is “not a concert, it’s more of an experience.” She hopes that seeing this concert will potentially inspire music students in the audience to “explore nontraditional chamber settings like we have.”

After the performance, Lipton, Cranson and Laursen stayed back to talk with those in attendance. Music students at GVSU were able to ask more questions and get an insight into the lives of professional brass musicians.