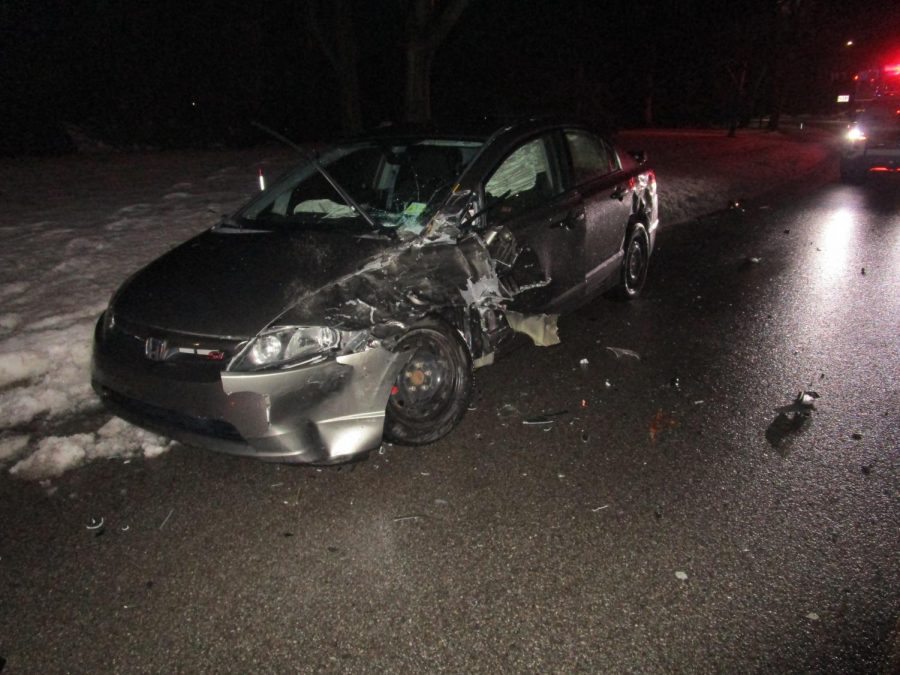 On Saturday, Jan. 25, there was a hit and run on Grand Valley State University’s Allendale campus. GVPD Capt. Jeff Stoll made it clear that although there were minor injuries from the crash, none were life-threatening and neither of the two victims, both GVSU students, were taken to the hospital.

At approximately 2 a.m. on Saturday night, a suspect vehicle struck another car by the entrance of lot D1, by Mackinac Hall. In more detail, the victim car was heading towards the library, turning left into lot D. The suspect car was heading toward the arch and hit the victim car just before they made their turn. Stoll said that the suspect car veered into the other lane when it made contact with the other car. Stoll also explained there is a usual crash procedure that everyone must follow, which did not happen in this case.

“The caller indicated that a vehicle had struck their vehicle (the victim) and continued on,” said Stoll. “As you probably know when you are involved in an accident, you are required to stop and exchange information, talk to the police or do something. You can’t (do nothing). You have to stop. I can tell you in this case specifically, (the suspect) didn’t even get out of the car, they never stopped and just kept on going,”

Stoll mentioned that they don’t have many hit and run cases on the Allendale campus, but bumping cars in parking lots is common.

“Most of our hit and runs occur in parking lots, just because of the frequency. I think sometimes there are situations where people don’t realize that they hit a car, but this is pretty significant damage and not something we see very often,” Stoll said.

Once officers were dispatched to the scene and took care of the victim car, they started their investigation.

“The officers got a description from the victim car, so our dispatch here was able to pull up one of our cameras and found the crash on video. Using that, we were able to see that the view we had didn’t provide any defining characteristics on the vehicle. However, once you’re able to identify that vehicle, you’re able to use other camera angles that help to provide additional information about that vehicle that they were able to pass along to officers. (Based on that), officers were able to have a good description in relation to the vehicle, and turned to checking out the area and trying to find it. They didn’t find it that night, but they were able to find it the next day,” Stoll said.

Stoll wanted to make sure that GVPD officers Kelsey Sietsema and Andrew Hintz as well as dispatcher Ivan Christopher were recognized for their tremendous work on the case. With the help of dispatch, the officers were able to find the suspect car by 4 a.m. Sunday morning, approximately two hours after the crash.

“As a result of that investigation, we (GVPD) submitted criminal charges for hit and run and improper registration of the vehicle. The prosecutor approved the hit and run this week, so that suspect will have to go to court and go through that process,” Stoll said.

“The current case status is that charges have been authorized by the prosecutor and the suspect is set to be arraigned on those in the coming weeks at the Hudsonville District Court,” Stoll said.