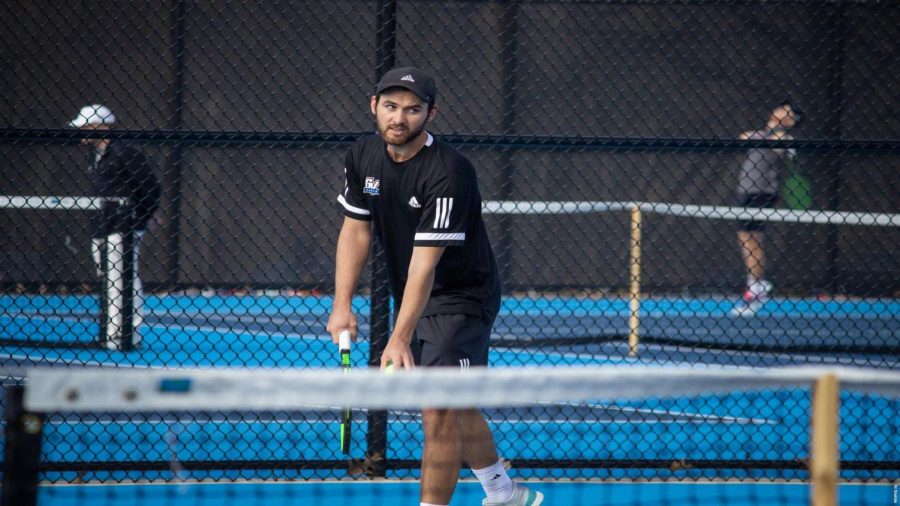 GVSU performed remarkably on Friday night. Wesleyan was previously undefeated, and the Lakers served them their first loss of the season. It was also GVSU’s fourth straight win against Wesleyan. The Lakers won two out of the three doubles games played.

Sophomore Jack Dausman and sophomore Martin Matov won the first doubles match of the afternoon, 7-5. The Lakers also won the last double of the day. Freshman Sean Miller and sophomore Ryan Rhoades were victorious with a score of 6-2.

During the single matches, senior Jack Geissler won and swept his opponent in two sets. He won both of his sets 6-1 and 6-3.

In the third single match, Matov started out slow, but came back to win two sets in a row to add to the Lakers lead. After losing the first set 2-6, he rebounded and won the next two, 7-6 and 10-6. In the next match, Miller again won after his doubles performance.

The Laker’s fortunes didn’t continue the next day. The team lost a close match against the University of Indianapolis, 4-3. GVSU unfortunately lost all of their doubles matches to start the event. In the first game, Dausman and Matov lost 6-1.

“Jack Dausman and Martin Matov had the opportunity to play the No. 1 ranked doubles team in the nation at UINDY, they competed well but their opponents played well to get the win,” said GVSU tennis coach Samantha Schall.

The Lakers lost their next set of doubles as well. Senior Jack Geissler and Rhoades lost, 6-4. Miller and Colantone lost a very close match, 6-7, to close out the doubles. The Lakers then split their series of singles matches against UINDY, 3-3.

Dausman lost his set of singles, 6-1 and 6-2 against one of the doubles members for UINDY, Dario Huber, who is No. 1 in the nation. Geissler faced the other member of the doubles team, Renato Lima, and was able to overcome him.

The Lakers closed out the match against UINDY with two strong victories after earlier struggles. Freshman Ignacio Morera-Lucas won the fifth set of singles for GVSU. In three tough sets against his UINDY opponent, he won in the final set. He lost the first set 6-2, then won the last two 6-4 and 7-6. Colantone closed out the matches for the Lakers on Saturday. He won his first set 6-1 then lost the second, 6-4. Colantone rallied for the final set of the night and won 7-6, to give the Lakers a final score of 4-3.

“UINDY has consistently been at the top of our region so we were excited for the opportunity to face them early in the season,” Schall said. “The doubles point was very close but didn’t go our way, that ended up being the deciding point in the match so it was a tough loss but we are motivated to regroup and prepare for our next competition.”

The next men’s tennis matches come next weekend for the Lakers. On Saturday, Feb. 15, GVSU will take on the University of Illinois Springfield. The next day, Sunday Feb. 16, they will compete against Walsh University. Both of these games will be in Grand Rapids, at the Premier Athletic and Tennis Club.