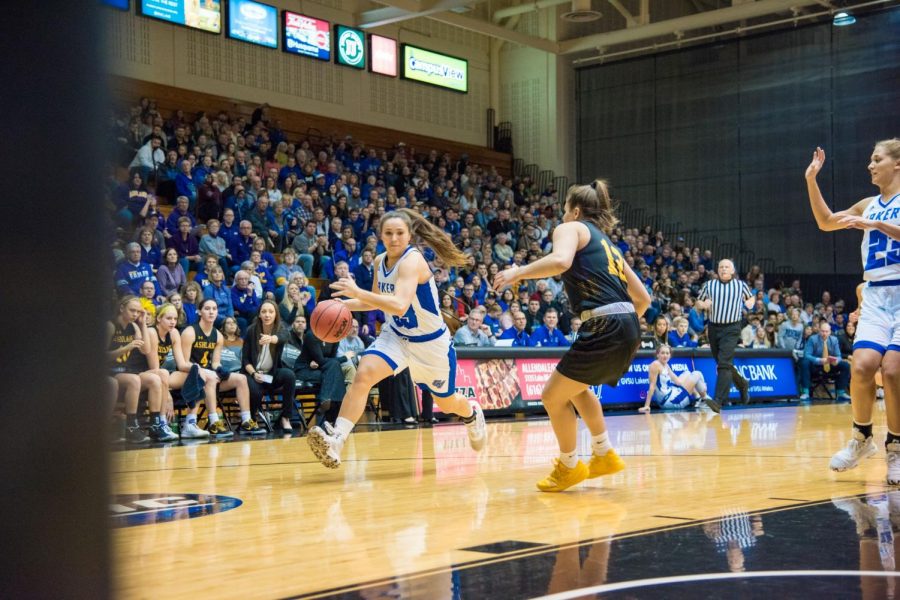 “Ashland is a really good team and we knew that going in,” said GVSU coach Mike Williams after the game. “I think they were really dialed in, ready to play, and I don’t think we were. In every phase of the game they beat us and as a coach that’s your fault so I have to do a better job.”

As a team, the Lakers struggled from behind the three-point arc, shooting just 14.3 percent on the night. The woes were not just from behind the arc either, as GVSU also shot a season-low 32.3 percent from the field overall. Ashland held the edge in rebounds (39-36), points in the paint (44-36), and steals (11-4) while finishing with an impressive 51.7 field goal percentage.

“I think they did a good job of getting into our space and we didn’t handle it well,” Williams said. “I also think we didn’t put enough pressure on them at the rim, you know, except for when we passed it in to Cassidy Boensch and a lot of times we didn’t even get the pass into her because we were too far away from the basket.”

Senior center Cassidy Boensch posted a double-double with 18 points and 10 rebounds while senior forward Maddie Dailey was the only other Laker in double-figures, who scored 10 points and pulled down seven rebounds.

“You know, this doesn’t feel good right now, but you gotta have faith in who we are as a team and just come back on Monday and keep working and build as a team,” Boensch said.

GVSU jumped out to a 4-0 advantage early and led 9-4 halfway through the first quarter before Ashland went on a pair of 6-0 runs to lead 20-14 at the first break. The Eagles took control of the contest early in the second frame by going on a 12-0 run and grew their lead to 32-14 with 5:50 remaining in the half. Ashland led 39-23 at the halftime break.

The Lakers would cut the deficit to 14 points at 47-33 with 4:09 left in the third quarter but the rest of the half was all Ashland, increasing their lead late in the third to seal the victory.

The No. 3 ranked Grand Valley State women’s basketball team came away with a 74-55 win over Wayne State Thursday, Feb. 6 inside the GVSU Fieldhouse Arena in a GLIAC matchup. The Lakers improve to 21-1 overall and 13-1 in GLIAC play, while Wayne State drops to 12-10 overall and 6-8 in the conference.

“I think we’ve talked about it a lot over the past two years, I’ve really been a defensive-type player because I take pride in guarding the other team’s best player,” said Dailey when commenting on the versatility of her game. “This season I’ve worked more on my offense and really just to see it pay off on either end is a really rewarding feeling.”

As a team, the Lakers scored 46 points in the paint compared to 30 for Wayne State, while also out-rebounding the Warriors, who lead the conference in that category, 49-26. Despite the three-point baskets not falling (2-15), GVSU shot a season-high 90.1 percent from the charity stripe, connecting on 20 out of 22 attempts.

“It felt good,” Boensch said of her team’s performance from the free throw stripe. “Sometimes you just take for granted that it’s going to go in, but it felt great to see a high percentage hit the bottom of the net.”

The Laker’s defense was stout in the first quarter, only allowing one field goal to the Warriors which was on a coast-to-coast layup as time expired. Boensch scored eight of her game-high 25 points in the first frame and GVSU took a 17-7 lead into the second quarter.

“I think she did a good job of scoring around the basket,” Williams said after the game. “She was good at getting around players and getting shots off with her right hard that went soft off the glass, hit a couple pull up jump shots, and did a good job on glass.”

After Wayne State hit a three-pointer to begin the ensuing quarter, GVSU went on an 11-0 run, spanning seven minutes of game-play, to increase their lead to 28-10. The Lakers took a 36-20 lead into the halftime break.

Wayne State came out of the halftime gates scoring at a much higher rate than the first half, but the two teams traded baskets for much of the third quarter and GVSU led 55-37 entering the fourth. The Lakers secured a game-high lead of 26 points at the 5:31 mark of the fourth quarter on a jumper by Taryn Taugher.

When time had ran out, the Lakers had secured a 19-point victory over the Warriors.

GVSU will host Saginaw Valley State next on Thursday, Feb. 13, at the GVSU Fieldhouse Arena with the tip set for 6 p.m.