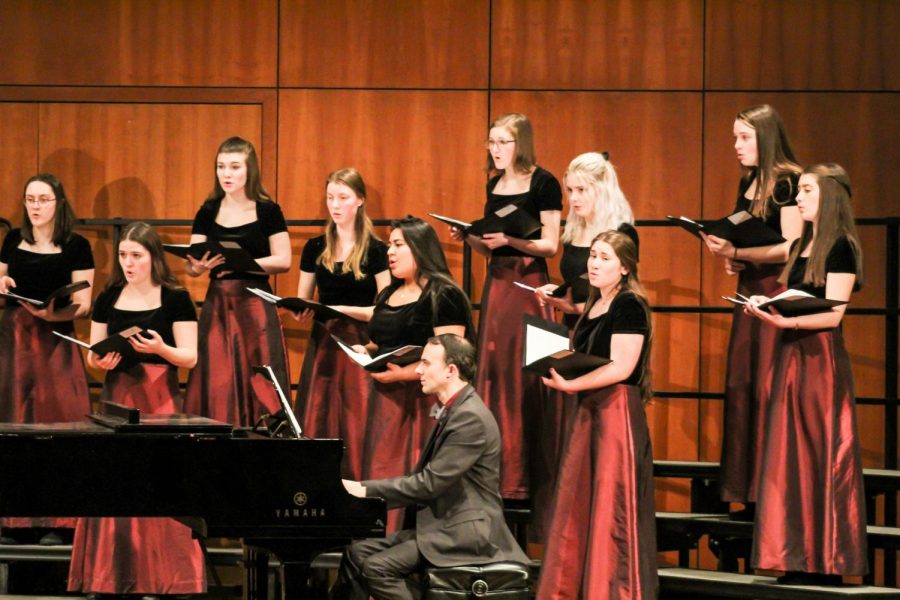 GVSU’s Select Women’s Ensemble performed three songs: “And Miriam Sang” by Zebulon Highben, which celebrates the Exodus story of Miriam celebrating with a group of women and the parting of the red sea, “Domine Deus” by J.S. Bach, and “Holy Is The Lord” by Jeffery Ames.

Grand Haven’s Advanced Women’s Ensemble performed two songs: “1941” by Andrea Ramsey, which is a song about a mother lamenting her son being overseas during WWII, and the second was the spiritual “Jericho” by Reginald Wright.

Spring Lake High School’s Bella Voce also performed two songs. The first was “Ubi Caritas” by Oka Gjeilo, which translates to “where charity and love are, God is there.” Their second song was “Sing Creations Music On” by Stephen Paulus, which is a celebration of music.

All three of the ensembles combined to perform two pieces by contemporary women composers: “I Started Out Singing” by Jocelyn Hagen and “Lineage” by Andrea Ramsey.

They ended the concert with a song the audience could sing along to, “Come and Sing,” a song based upon the works of German composer Paul Hindemith. The text of this song is printed on the carillon tower on GVSU’s Allendale Campus.

The three choirs spent the entire day together leading up to the concert. Associate Professor and Director of GVSU’s Select Women’s Ensemble Shirley Lemon said that her favorite part of the combined concert was “the community building that took place continually throughout the day.” She described the performance as “electrifying.”

Lemon said that she hopes the audience,“recognizes the need for connection in our world today and experienced first-hand the incredible role music making can have in forging those connections. They saw 80 women come together for a day and create a family by sharing their love of music.”

Director of Spring Lake High School choir Bella Voce Robin Kieft called the performance “inspiring.” She added that several of her former students attend GVSU and that many of her current students are considering coming to the university.

“I think this was a really important event, both as a musically enriching experience and for recruiting potential,” Kieft said.

Grand Haven High School student Kate Eisnor said that her favorite part of the performance was hearing other groups sing.

Miriam DeYoung, another student from Grand Haven High School, said that her favorite part of the concert was, “just being able to sing with and be surrounded by other women who love to sing.” DeYoung also said that she hopes audience members realize how important music is.