‘This is my Home:’ Officer Minh Lien protects GVSU while having a lot of fun 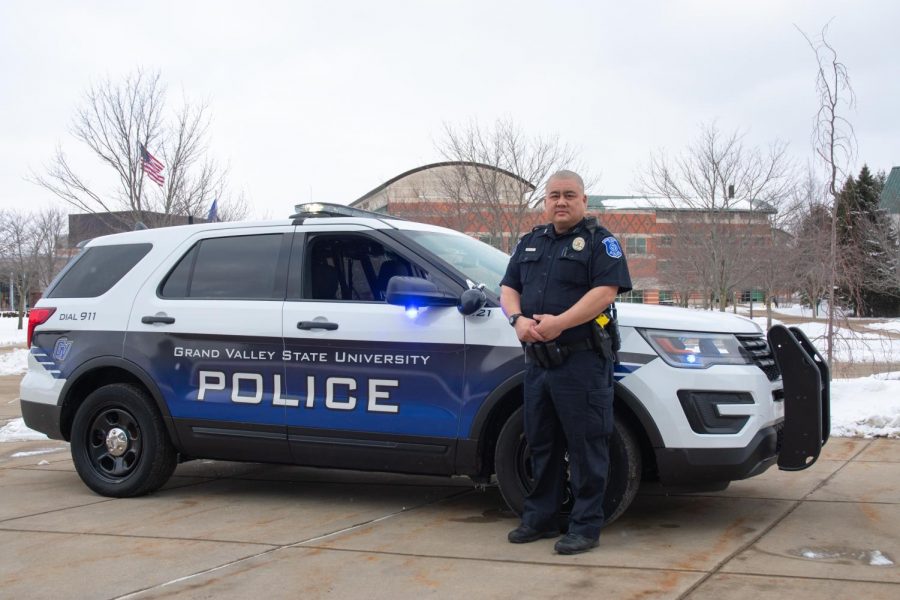 When walking around the Grand Valley State University campus, there are not a lot of faces that everyone recognizes.

At this point in her tenure, President Philomena Mantella is hard to miss by even the youngest of freshmen. And it’s impossible not to smile when Louie the Laker passes by.

In that way, Louie is very similar to Grand Valley Police Department Officer Minh Lien. Despite being one of the dozens of police officers working for the university, plenty of students know Minh’s name. But that’s not why he does what he does.

“I don’t do it to be liked or for a pat on the back,” Lien said. “My parents always taught me to do the right thing. I’ve been on second shift for a long time now, it will be 19 (years) on Sept. 23. Just like President Haas, he didn’t do his job to be liked, or to be praised, and that’s the same goal I have here.”

Lien has one other main goal on every 10-hour shift he has: he simply wants to make the people around him smile.

“I love working with students, and in a 10-hour shift, I want to make somebody’s day,” Lien said. “Just walking around and being positive and engaging with students and other community police officers. They challenge me to meet more people. The more information I give out, the more kids feel more comfortable in this community.”

GVSU’s notable community police officer has been at this job for 18 years, as when engineering didn’t work out at Kettering, he changed his major to criminal justice and graduated from the GVSU police academy. He has worked past jobs with Grand Rapids Public Schools, Grand Haven public safety and the Kentwood Police Department.

The lesson he has taken away from a nearly two-decade stint as a community police officer is that communicating with the students is key, as they feel safer when they know who they can turn to in a crisis.

“What I’ve learned from community policing and the police academy is the more they see us, the higher the safety factor and the more the students are put at ease,” Lien said.

He also learns a lot from the same young people that he tries to make feel good at their home away from home.

“I learn a lot from students too,” Lien said. “I’m the kind of person who is not a know-it-all. I tell the younger officers (that) we all have strengths and weaknesses. We have a lot of eyes and ears, and the more of a rapport we build with students the better.”

Lien made sure to credit his coworkers who help keep the campus safe, as there are roughly two dozen other officers who do what Minh does to go along with a department that is one of the strongest at GVSU.

“This is where crime prevention is at it’s best,” Lien said. “When nearly 6,000 eyes and ears come help us.”

On his bio on the GVSU website, Officer Minh credits the famous religious figure Buddha for his philosophy on life: “All wrong-doings arise because of mind. If mind is transformed, can wrong doing remain?”

When asked to explain his philosophy for that quote, Officer Minh could go on for hours.

“Fast forward 10 years down the road,” Lien said. “You’re a police officer and you send your kid here — do you want the police officer to look at your father or son negatively? These are young, underage kids. They’re not bad people. This is where we put them on the right path.”

Lien also cited the teamwork from departments like the LGBT and women’s centers and the counselor’s office, as they all come together to help students graduate.

Lien also got into this field because he wanted to change the narrative around police in America. He wants to help people, and the best way he knows how to do that is trying to put a smile on students’ faces.

“This is my home,” Lien said. “We’re approachable. Especially if you want to be a police officer, come talk to us and reach out. If you don’t reach out, we don’t have the answers.”