GVSU Basketball wins Battle of the Valleys, falls in nail biter to Northwood 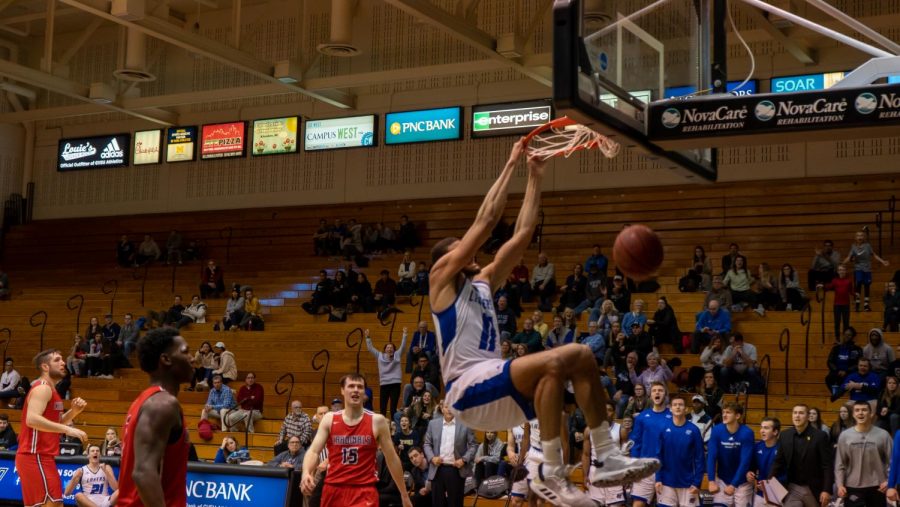 The Golden State Warriors won three championships last decade thanks to great spacing, an unselfishness on the perimeter and an innate ability to knock down clutch threes.

The Grand Valley State men’s basketball team took a page out of the Warriors playbook Thursday night, beating the Saginaw Valley State Cardinals, 86-74, while tying their 14-year-old school record with 16 made threes in the victory.

Junior guard Isaac Gassman, who led the team with 19 points and five of those made threes, credited his teammates for helping him get open and getting him the ball in the right spots.

“Today they were giving me a lot more space than usual,” Gassman said. “I know Jayden (Hodgson) and those guys do a good job of finding me, today was just one of those days it went in early and often.”

Speaking of Hodgson, he was feeling it from deep, too. The senior transfer from Bradley shot 83 percent from three in the game, making five of his six threes.

The Lakers weren’t playing iso-ball either, as Gassman, Hodgson and senior Jeremiah Ferguson combined for 15 assists in the win.

“I thought we shared the ball really well tonight,” said GVSU coach Ric Wesley. “At one point in the year, we had four new starters, so I’m proud of our guys for getting to this point.”

While the Lakers were down by nine with five minutes left in the first half, they used an 18-2 run and flashed some 2-3 and 3-2 zones to close the half and gain the momentum to win the game.

“You watch a lot of teams, and zone is something they can go to in key moments and at the end of games,” Hodgson said. “It’s not as much running around, so you’re able to conserve some energy, but when you’re locked in, it’s hard to penetrate and almost impossible to get a good shot up.”

The Lakers were unable to carry that momentum into the weekend, as they lost a close GLIAC battle on the road to the Northwood Timberwolves, 67-64. It was their fifth loss on the season.

Despite junior Jake Vantubbergen (26 points, four assists in the loss) hitting a Dirk Nowitzki-esque fadeaway and-one to cut the deficit to one with 2:23, Northwood hit a few daggers at the end of shot clocks to seal the victory.

While Wesley has been happy with his bench’s contributions as of late, the second unit has only combined for seven points in the Lakers last two losses. He wants to see those role players be more aggressive on offense.

“That was a big part of Northwood’s success, the unknown guys beat us,” Wesley said. “We didn’t get much out of our bench, but that’s partially because we’re not moving the ball well. We got to keep looking for different options on offense.”

Despite Saturday’s loss, GVSU still boasts an impressive resume. They are 20-5 on the year, and are tied for first in the GLIAC with a 13-4 conference record that is the same as Ferris State. The Lakers are proud to get their twentieth win of the season, especially with how strong this year’s conference has been.

“Getting to 20 wins is always an impressive accomplishment, especially this year when we have ten new players,” Wesley said. “That’s reason to celebrate.”

The Lakers hope to celebrate more to close out the season, as they end the year with match-ups against Northern Michigan, Michigan Tech and Davenport before preparing for the GLIAC Tournament.