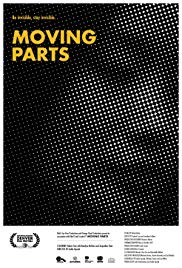 John Otterbacher has come a long way since his days of watching experimental art films with his dad in the basement. As a Chicago-based filmmaker, he manages the independent film company Orange Chair Productions and teaches at Tribeca Flashpoint Media Arts Academy.

Yet Otterbacher fondly recalls checking out classics like “Apocalypse Now” for the first time and realizing how film can open the viewers to new worlds.

“I never wanted a regular job,” Otterbacher said. “I’d be bored out of my mind.”

Otterbacher’s journey toward a career in film began at Grand Valley State University, where he studied video production and received his Master of Science in Communications.

The GVSU Summer Film Project, an annual series where students fill roles on a professional movie crew, was the highlight of the program.

“It was my second year as a student when I worked on Flicker Blue, and I started in a low-tier position as a camera operator and later moved up,” Otterbacher said. “It gave me a certain level of confidence.”

In-between productions, Otterbacher would check out film festivals and concerts in Chicago. When Otterbacher graduated and received an offer to produce a film called “RiffRaff” in Chicago, he jumped at the chance to move to the Midwest’s largest film market.

The transition was not always smooth. As a new filmmaker, Otterbacher taught himself the production side of the film business quickly and accepted any gigs that popped up, not just passion projects.

“The independent film world — there’s not a lot of money in it,” Otterbacher said. “I needed to find a balance between making the films I wanted to make and paying the bills.”

By the time he reached his late 30s, Otterbacher had decided to supplement his independent film career by pursuing his MFA and teaching film.

The inaugural class of the Vermont College of Fine Arts MFA program originated from countries around the world. A student named Emilie Upczak traveled to the U.S. from Trinidad, seeking to turn her film Moving Parts into her thesis project.

Upczak and Otterbacher met on campus, and they clicked. Soon, the pair were working together to bring Upczak’s globe-spanning story to life.

Moving Parts tells the story of Zhenzhen, a young Chinese woman who travels to Trinidad in search of her brother Wei and finds herself caught up in the human trafficking industry. The inspiration for Moving Parts comes in part from Upczak’s memories of seeing seedy establishments and desperate people in Trinidad.

With its crew based in Trinidad, Moving Parts required a more substantial budget than what a graduate student typically receives for a project. With some luck, the Moving Parts team raised enough money to keep the international production going.

Once shooting wrapped up, Moving Parts moved to Chicago for post-production. In total, Moving Parts took five years to complete and roll out.