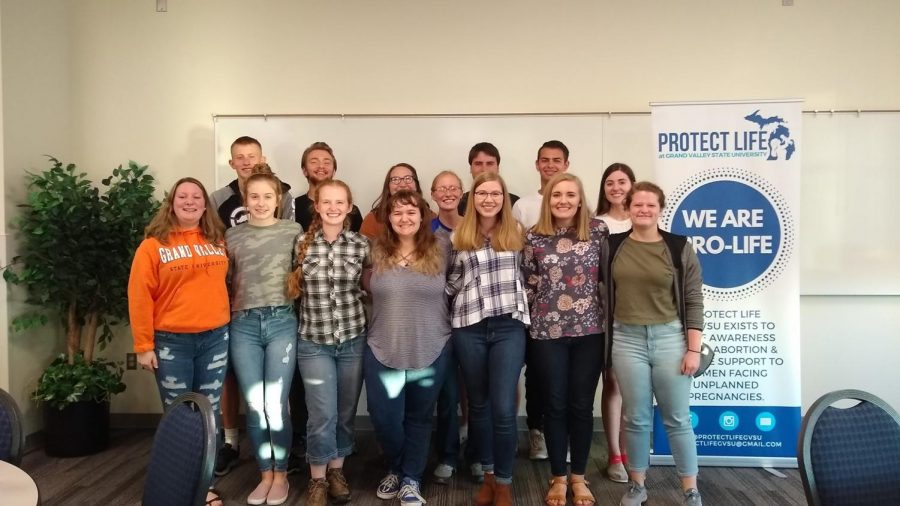 Abortion is one of the most controversial topics in American politics. According to the Pew Research Center, there is a substantial and growing partisan divide on abortion. Still, groups are attempting convince people from the other side of the spectrum.

On Feb. 11, Grand Valley State University student group Protect Life tried this through their “Stump the Pro-Lifer” event. Protect Life Michigan has been hosting the event at every college in Michigan for the past four years. Trevor Pollo, Protect Life Michigan’s Director in Training gave a speech about why he thinks abortion should be illegal.

“When we look at the field of embryology, they observe that the unborn from the moment of conception is growing, is reproducing at a cellular level and is consuming energy,” Pollo said. “These are things that biologically alive things do.”

According to Protect Life Michigan there are about 920,000 abortions performed in the United States each year. But the Guttmatcher Intitute, a research group that supports abortion rights says abortions are at a historic low.

“I am definitely pro-choice. I think when it comes to pregnancy a lot of decisions go into it,” said activist and GVSU junior Alexis Gunn. “I am the product of teen pregnancy, so I don’t think anyone should be forced to go through that when they don’t want to.”

Although there are restrictions, abortion is legal in all 50 states. Reproductive rights experts anticipate the abortion landscape to change even more dramatically in the year ahead due to expected court rulings and new laws. Protect Life at GVSU continues to push for abortion to be completely illegal. Their mission is to end abortion by recruiting and training students for pro-life leadership.

Republican-led states, emboldened by the Supreme Court’s new conservative majority, passed 59 abortion restrictions in 2019. Some students at GVSU are frustrated by this.

Some states have successfully implemented 20-week abortion bans. Other states have enacted laws that prohibit or limit abortion in the second or third trimester. Restrictions depend on the state. None have abolished abortion entirely due to Roe v. Wade, the 1973 Supreme Court Decision that protects a woman’s right to have an abortion. But now, more than 200 Republican members of the House and Senate are fighting it. In January, these representatives and senators wrote a brief in a court case arguing it’s time to overturn Roe v. Wade since its been standing for 47 years.

Director of Protect Life Michigan Christen Poll said Stump The Pro-Lifer welcomes the opposing side and encourages discussion. After Trevor Pollo’s speech at the event, he opened up the floor for anyone that had questions. Several students opened up on their stance during the event.

Pro-choice advocates like Gunn also spoke out about their opinion on the issue with rape cases, using statistics from the Center for Disease Control and Prevention.

“It’s one in three women that are raped or sexually assaulted,” Gunn said. “Unfortunately, I am one of them. When I went through that, I couldn’t imagine if I was also pregnant.”

According to recent studies, more than one in four female college students have experienced sexual assaults that lead to unwanted pregnancies. The majority of women who utilize abortion clinics are in their twenties.

“There are actually very few abortion clinics,” said Anne Larson, junior at GVSU. “A lot of people have to travel a great distance that will offer the service to them. Most Planned Parenthoods don’t even offer it, but yet we see these protesters harassing people going there for something like a pap smear.”

Currently, there are no pro-choice groups at GVSU, but there may be one in the future.

“I definitely think if we have a pro-life group, and a pro-choice group isn’t on campus, there is definitely about to be one,” Gunn said.

Stump the Pro-Lifer is continuing to be held at colleges and universities in Michigan and surrounding states. Although the debate over abortion is not yet solved, both sides are continuing the conversation.