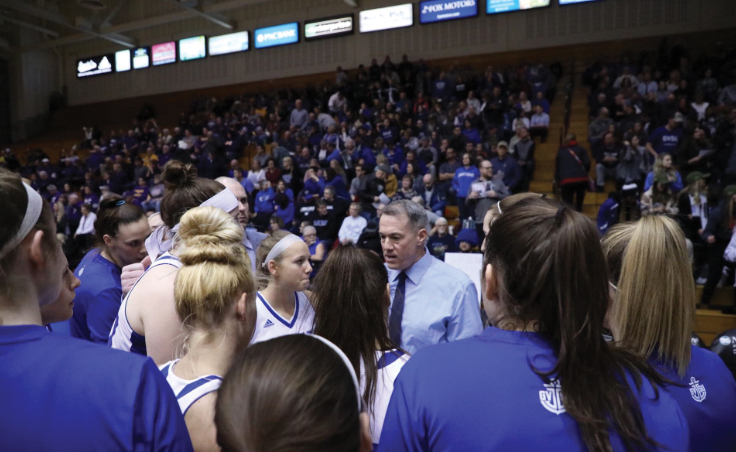 Before the Lakers two victories, the NCAA released their first round of regional rankings for DII women’s basketball Wednesday, Feb. 19 for the 2020 season. In the rankings, GVSU was placed third in the midwest region behind two undefeated squads, Drury and Ashland, who are both 27-0.

When asked what he was looking for out of his roster as the GLIAC and NCAA tournament fast approaches, GVSU head coach Mike Williams said his focus is primarily on health.

“We gotta keep our kids fresh and continue to recover from the bumps and bruises that we have,” Williams said. “Then we can focus on tweaking a few things here and there and continuing to play good basketball.”

GVSU overcame a slow start to earn a 53-38 win over Northern Michigan on the road Thursday, Feb. 20 at the Berry Events Center. The Lakers clinched the number two seed in the GLIAC Tournament after the win and improved to 24-2 overall and 16-2 in conference play.

As a team, the GVSU defense put together a strong performance, holding Northern Michigan to just 26.9 percent shooting from the field and a 28.6 percent mark from three-point range. The Lakers dominated points in the paint (34-20) and outrebounded the Wildcats 37-30.

In the first quarter, Northern Michigan traded baskets back and forth with the Lakers and took a 9-8 lead midway through the frame. The Wildcats increased their margin on a pair of free throws before the end of the first quarter and led 13-10 when the frame ended. The lead did not last long however as GVSU quickly went on a 16-0 run to begin the second quarter. The Lakers outscored NMU 20-2 in the quarter and took a 30-15 lead into the break.

Northern Michigan cut their deficit to 13 points in the third quarter and briefly 12 points in the fourth quarter, but it was not enough, as the Lakers cruised to a victory down the stretch and overcame their 56-43 loss last season in Marquette.

GVSU again overcame a slow start for the second straight game in a row before using a dominating effort in the second half to defeat Michigan Tech, 70-49, Saturday, Feb. 22 at SDC Gym. The Lakers moved to 25-2 overall and 17-2 in conference play with one game remaining in the regular season.

Senior center Cassidy Boensch added to her back-to-back GLIAC Player of the Year resume with 30 points on 12-18 shooting from the field, nine rebounds and five blocks to pace the Lakers.

“Cassidy made great decisions, went into attack, and when she attacked she did so with as much pomp as she’s had all year, in my opinion,” Williams said. “Sometimes they played her straight up, sometimes they ran multiple people at her and she just did a really good job of deciding when to go get it, when to kick it out, and when to move the ball around, definitely one of her best games all year.”

Michigan Tech jumped out to an early 11-6 lead and led 17-10 at the end of the first quarter, the second consecutive game the Lakers have trailed after the first. GVSU went on a 7-0 run during the first two minutes of the second quarter to tie the game at 17-17 and the two teams traded baskets for the rest of the half. The score was knotted at 27-27 going into halftime.

“We weren’t real clean with the ball in the first quarter and didn’t play real sharp on defense early on,” Williams said. “This time of year teams are going to come at you with energy and it was senior night (for Michigan Tech), so I thought moving forward after that first quarter I thought we did a lot better job all the way around in the second, third, and fourth quarter.”

The Lakers progressively built their advantage in the third quarter and took an eight-point lead, 52-44 heading into the fourth. GVSU outscored the Huskies 18-5 in the final frame and built a game-high 21 point lead in the closing minutes of the contest.