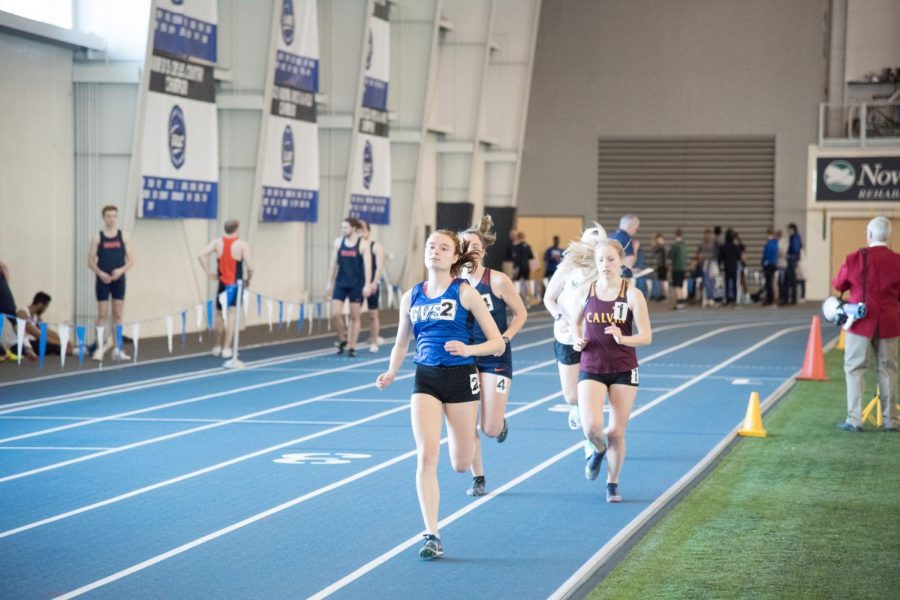 This past Friday, Feb. 21, the Grand Valley State track & field team ran their last meet before the GLIAC Championships begin Friday, Feb. 29 through Sunday, March 1 at the Kelly Family Sports Center. A lot of athletes had successful qualifying scores at the tune-up meet, leaving everyone ready to get mentally and physically prepared for next weekend.

Some of the highlights on the women’s side from Friday were Abbey Classes taking first place in the 400-meter dash with a time of 59.65, Brittany Rainey taking first in the 60-meter hurdles at 9.13, Jenna Doyle completing the high jump with a score of 1.61 earning first place, and the 4×400 relay race completed by And Kimes, Abbey Clasen, Madison Shroda and Katherine Westfall with a time of 4.10.65.

In the pole vault, Rachel Dolan took first place with a score of 3.59 tied with a Davenport athlete, followed closely by Colleen Campbell and Kaylee Koch tying at 3.44. Anglecia Floyd and Elizabeth Bruxvoort placed in first and second in the long jump with Floyd at 5.97 and Bruxvoort at 5.22, Erica Lechner took first in the shot put with a score of 14.03, and Franesha Robinson-Mitchell took first in the weight throw at 18.44.

On the men’s team, the 60-meter hurdles were dominated by GVSU athletes starting with Tyler Kirkwood and Tyler Mansfield tying for first at 8.28, followed by Thomas Moreman taking fourth with 8.70. The 200-meter dash was completed by Andrew McFarland taking first with a time of 18.31 while Matt McLaughlin ran the 400-meter dash with a score of 49.73, followed in second place by Jaylen Hasan with a time of 49.76.

After last week’s multiple record breaks and successes all across the board, the athletes are starting to gain the confidence and motivation they are going to need next weekend at the championships. Nicole Sreenan, a junior this season, broke the school record for the 400-meter dash at the Akron, Ohio invitational, and then broke that record the following week at the Big Meet.

“It’s just kind of surreal for me still,” Sreenan said. “Honestly, I think my coach thought my original time wasn’t a good reflection of what he thought I could run, and I’m not going to lie, I haven’t really processed that I broke the school record.”

Sreenan said she looks up to the previous record holder as a friend and a teammate, so being the new record holder and having a higher score than someone she thought couldn’t be beat is something that has given her confidence and the push of motivation she needed for next week.

Dennis Mbuta broke an impressive two records in one weekend at the Big Meet with the 800-meter dash and the 4×400 relay. That makes four total just this season for Mbuta who still has one more year of running for GVSU to go.

“It felt amazing,” Mbuta said, reflecting on breaking records. “Getting the 800-meter record was the main focus for the weekend and also positioning myself well leading into championship season. I was extremely proud to be able to do it in front of a home crowd, with family and friends in the stands watching. The hardest one to break was definitely the 800m. This was one record I’ve had my eyes on since coming to Grand Valley.”

Mbuta is looking forward to the championships feeling confident and motivated as well after the successes the past few weekends.

“I just think of (the track team as a) big family,” Mbuta said. “Ever since coming to GV everyone on the team has been welcoming of each other.”

Now that all the qualifying marks are in and all the athletes are preparing for GLIACs, the team has another year to test their abilities and see if they can beat last year’s second place in the nation title. Their biggest competitor will be Ashland, but from the looks of the past couple of weeks they shouldn’t have a hard time taking the championships by storm.