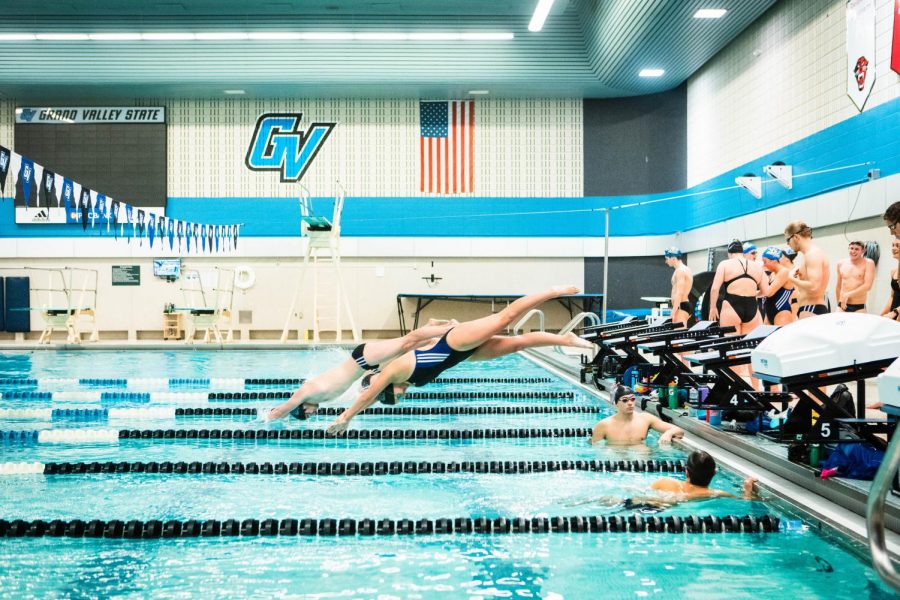 This past week, Feb. 19-22, the Grand Valley State University Swimming and Diving team did it again at the GLIAC championship.

For the sixth consecutive season, the Laker’s men’s team dominated the competition and took the GLIAC trophy home. They finished the tournament with a whopping score of 1,025 points, beating second place Wayne State by over 250 points. The Lakers men took home nine GLIAC titles overall, tied with Wayne State for most titles for a team.

The GVSU women’s team also had an impressive performance, coming in third during the tournament with 767.5 points.

GVSU also won six individual awards at the event claiming all but two. Head coach Andrew Boyce was named coach of the year. Sophomore distance swimmer Jesse Goodyear took home the GLIAC’s male swimmer of the year, and senior Melina Goebel was presented the same award for the women’s team. The Lakers also won both top diving awards. Senior Makayla Karesek and junior Chirs Kelly were the top divers in the league this year. Freshman Roger Miret-Sala was named the GLIAC freshman of the year.
Day 1
The Lakers started out hot when competition began Wednesday, Feb. 19. The men finished first with 190 points. The women finished second with 205.5 points, only trailing Northern Michigan University. The women’s team continued their dominating season on the first day of the tournament. GVSU had two top finishers in the 1,000-meter freestyle. Goebel finished first with a time of 10:05.63 and freshman Neta Shiff finished third clocking in at 10:14.42.

The men’s team dominated on their way to the top of the scoreboard during day one. Junior Oscar Saura-Armengol finished second in the 50-meter freestyle with a time of 20.42. The men’s 200-medley relay team rose to the occasion of the tournament and swam one of their best times of the season. The relay consisting of senior Harry Shalamon, sophomore Keegan Hawkins, Saura-Armengol and sophomore Dzmitry Novikau, made the NCAA A cut with a time of 1:28.85 and will compete in the event again in the NCAA tournament.

Sophomore distance swimmer Jesse Goodyear broke another record this year. In the 1,000 yard freestyle Goodyear broke his own school record and the GLIAC record winning the title at 9:10.35. Goodyear wasn’t the only swimmer on the men’s team winning titles. Shalamon won the 200 IM with a time of 1:46.71. Hawkins finished seconds behind Shalamon coming in third, hitting the wall at 1:48.83.
Day 2
The Laker men’s team kept things rolling on the second day of the competition staying atop of the scoreboard with 484 points. The women’s team slipped to third with 339.5 points behind NMU and Wayne State. The team had several strong individual performances however.

Grand Valley’s men’s team also performed strongly in their individual performances. Hawkins finished second in the 400-yard IM with a time of 3:52.15. In the 100-yard fly event Saura-Armengol won the GLIAC title with a time of 47.79. The Lakers took the top three spots in the event with Shalamon finishing second at 48.60 and Novikau finishing third with a time of 49.78. Freshman Roger Miret Sala finished third in the 200 yard freestyle with a time of 1:38.71.

The Laker relay teams also finished in the top three in their two events. In the 200-yard freestyle relay the team of Saura-Armengol, Novikau, Miret Sala and Shalamon finished second at 1:20.81. In the 400-medley relay sophomore Noah Ellis, Hawkins, Saura-Armengol and Miret Sala won the GLIAC title with a time of 3:15.44.
Day 3
The men’s team continued to dominate the competition during the third day of the event. They led all teams with a score of 725. Goodyear again claimed another GLIAC title, this time in the 500-yard freestyle. He clocked in at 4:27.08. Saura-Armengol also won another title in the 200-yard butterfly with a time of 1:48.26. Miret Sala finished second in the same event at 1:49.09.

Shalamon just barely missed out on his second GLIAC title during the third day of competition. He finished second in the 100-yard backstroke at 47.58 and came a decimal of a second away from the victory.

The women’s team stayed in third place after the third day of competition. The day brought their total championship score to that point at 588.5. While the team was still behind on the scoreboard, they did claim three individual GLIAC titles.

Goebel finished first in the 500-yard freestyle with a time of 4:54.98. This was her third consecutive title in the 500 at the GLIAC championship. Shiff finished third in the event at 4:59.85. In the 100-yard breaststroke Wihebrink won her first ever GLIAC title as a freshman, winning the event with a time of 1:03.54.

Laurich finished third clocking in at 1:04.02. Karasek also claimed a GLIAC title for the team. Her outstanding performance in the 1-meter diving event gave her the top score with 449.10 points.
Day 4

Saturday was the final day of the competition. The Lakers men finished what they started by taking first place with 1,025 points. Goodyear continued to break records during the fourth and final day of competition. In the mile-race, 1,650 meters, Goodyear won the GLIAC title and again broke his own school record clocking and GLIAC record at 15:23.05.

“I actually didn’t know that I had broken records in the 1,000 and 1,650 and was just happy that I did a personal best,” Goodyear said. “Finding out that I had broken the records was awesome. All my focus in the events was to just try my hardest as I knew that all the work I had put in at training all led up to these moments. My parents also flew all the way from Sydney, 27 hours of traveling, to watch me which just topped off everything. I was so happy to see them in the stands to watch me and made me feel a bit more ready to go as well.”

Goodyear wasn’t the only won to win a GLIAC title on Saturday. Shalamon won the title in the 200 yard backstroke for the second consecutive year. He won the event with a time of 1:44.97.

“Shalamon is the national champion in the 200 backstroke,” Boyce said. “There was some kind of noise at the start of the race and everybody reacted differently to the noise. It was an interesting way to start the race and they didn’t call the swimmers back up. They ended up taking the results from the race and he started about a second late. His time probably should have been a little faster than what it is. He ended up winning by a mile though and put in a great performance. We expect big things from him here in the next two weeks.”

The Laker men’s team also was an assertive presence in the diving events. Of the eight top spots available, the Lakers took five of them. Leading the way for Grand Valley was Kelly coming in second with 429.55 points in the 3-meter diving event. Freshman Wrigley Fields took third with 417.5 points.

The Lakers rounded out their final day of competition in third place with 767.5 points. Goebel started things off for the team by taking the GLIAC title in the 1,650-meter race. This was her third straight year winning the event and her eleventh overall GLIAC title in her career at GVSU. She finished the event at 16:51.55.

“It’s great to know that all the hard work pays off in the end,” Goebel said. “Especially this year it has been a really hard season for me. I’m really happy that conference went that well for me. I didn’t expect to win three titles this year. We have a really good distance group and we have been pushing each other during each practice so that’s been helping a lot.”

The women’s team dominated in the long distance events for the Lakers. They have won five consecutive titles in the 500, 1000, and 1650 at the GLIAC championships for GVSU.

The men and women’s team each got about 17 to 20 NCAA cuts during the competition. The Lakers will find out next Wednesday, Feb. 26, which players have made the cut to swim at the NCAA tournament.

“You couldn’t ask for much more,” Boyce said. “They really came together as a group. If someone didn’t have the best swim or dive in the world our team got behind them. When they got behind each other and supported each other, they swam even better in their next event. It’s hard to bounce back from having a bad swim or dive but we did an incredible job getting back out there and being better.”

Without the support of everyone on the team, they may not have won their sixth title in a row. The NCAA 11 national championship tournament will take place March 10-14. This will be the last time that the Lakers will compete this season.