Hitting the reset button: GVSU Baseball looks to build together, get back to winning ways 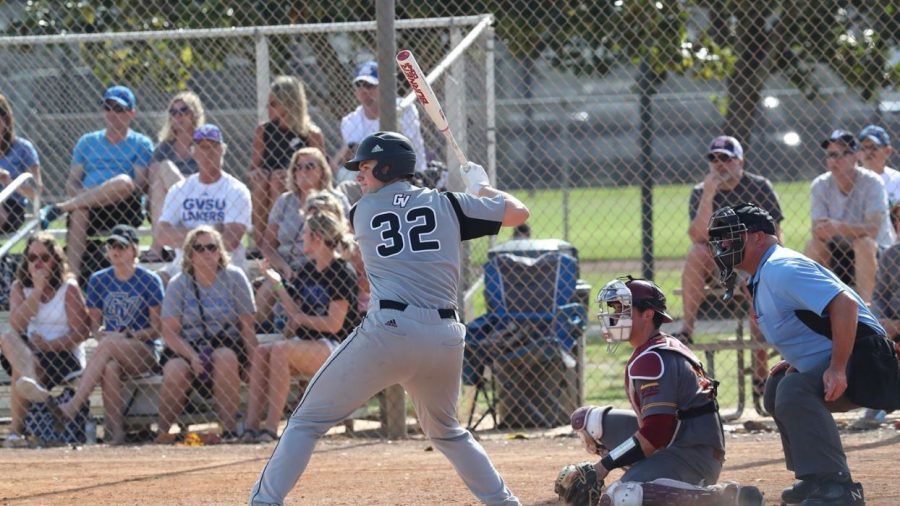 Just like most, if not all fans of the program, Grand Valley State University Baseball would just like to pretend last season did not exist.

The Lakers finished last baseball season 15-27-1 and second to last in the conference with an 8-16-1 mark. Decimated by injuries and marred by inconsistent play, GVSU looks to start this year out on the right foot–this time with a few familiar faces and a couple new ones as well.

Let’s break it down by position group, starting with the hurlers.

A year ago, the starting pitchers GVSU trotted out to the mound were arguably one of only a few bright spots for the Laker baseball team. Freshman Rylan Peats and juniors Michael Morelli and Cade Cintorino all had earned run averages of sub 3.50 (2.85, 3.00, and 3.44 respectively). But with Morelli transferring out and Cintorino using a medical redshirt, GVSU will have to turn to some of its new talent to start alongside Peats. When asked about the looks of the pitching staff heading into the season, Peats was undaunted in his summarization.

“I’m really liking where we are at right now,” Peats said. “There’s not a guy on our team that lacks a work ethic or lacks a want to be good.”

In terms of new guys to look out for, Peats pointed toward two transfers who have been putting in a lot of work over the off-season.

“I think Mark Scannell is going to be a really good right handed pitcher, he’s consistent and you know what you’re going to get out of him and that’s an absolutely insane work ethic,” Peats said. “I’m really excited to see what Mark can do and Ben Thomas is another one of those guys too, big right hander from Kalamazoo Valley that lives low in the zone and is capable of doing big things for us.”

As a sophomore last season at Kellogg Community College, Scannell was voted KCC’s Student Scholar-Athlete of the Year. He appeared in 10 games for the Bruins where he made four starts and compiled a record of 4-0 with three saves, 34 strikeouts, and an ERA of 1.72 in 36 ⅔ innings of work. In 12 appearances and 11 starts for the Kalamazoo Valley Cougars, Thomas compiled a 6-3 record on the mound with a 2.18 ERA and 60 strikeouts in 62 ⅓ innings pitched.

Peats also pointed out a number of returning players that stand to improve from last season and become impact contributors on the mound for the Lakers.

“I’ve talked a little bit about my roommate Sam Leck, he’s another guy with good (velocity) and movement on his pitches and I think he’ll make a big contribution this year too,” Peats said. “Nick Shaw is also another absolutely dynamic lefty with high (velocity) and good command of his pitches, be on the lookout for him, im expecting him to be legit as well.”

Leck posted a 4.87 ERA a year ago over 20 ⅓ innings pitched. Shaw similarly posted an ERA of 5.06, but also struck out 36 batters in just 26 ⅔ innings on the mound. If both can maintain control of their pitches low in the zone, they should both become impact pitchers for this staff as the season goes on.

A year ago, Laudont led all GLIAC catchers in batting average (.358) and OPS (1.034) while also posting a .988 fielding percentage. Bonter topped GVSU in batting average at a .371 clip while Murdie led the team in hits (44) and Cocco led the Lakers in extra base hits (16). Blake-Jones played less than half of last season as a junior with an upper arm injury that limited him to just 22 games played, but as a sophomore Blake-Jones was elected first team all-GLIAC as he hit .407 at the plate with six home runs and 51 runs batted in.

Rounding out the infield at third base is junior transfer Jordan Chandler, a player who GVSU coach Jamie Detillion views should not be overlooked.

“Jordan Chandler is our third baseman,” Detillion said. “I expect him to be a big contributor this year.”

As a sophomore at Carl Sandburg Community College last year, Chandler hit .417 with 18 extra base hits, eight of which were home runs.

“I don’t think I’ve ever been a part of a team that feels so close,” Chandler said. “It’s truly a family setting and I couldn’t ask for a better group of guys to play baseball with.”

In terms of his contributions out on the diamond, Chandler likens his personality to that of Mike Trout; a throwback baseball player who is out there just playing the game he loves.

“I’d say I’m a classic-style baseball player, I’m not flashy, I’m not going to turn any heads with the way I look and I kind of like it that way,” Chandler said. “I’m not a big flash, pizzazz guy, I’m definitely more of a let my game do the talking type of guy, kind of like Mike Trout— I’d never compare myself skill-wise to him — but I can definitely compare with the personality.”

Standing at 5’9, Chandler isn’t the tallest guy on the team, but what he lacks in height, he makes up for in pure strength. According to GVSU’s athletics website, he tips the scales at 205 lbs and if you were to catch him outside of class or practice, he looks more like a bowling ball running back who’s about to strap on some shoulder pads and hit the gridiron than a guy who is about to lace up some cleats and stroll out to third base on a baseball diamond.

Add him into the mix of talent in the Laker infield and this group should help propel GVSU into the top third of the conference offensively should they remain healthy.

Outfield is a grey area for this GVSU Laker baseball team. The Lakers currently have only four outfielders on their roster as depth may be a concern if injuries arise during the season.

GVSU returns seniors Jonathan Catapano and Stephen Pim from a year ago while adding high school recruit Nathan Logan and junior transfer Spencer Nelson. Catapano was one of the Lakers bitten by the injury bug a year ago, as he played in only 27 games, making 16 starts. On the year he hit a modest .242. Pim was a lightly used backup outfielder last year who struggled mightily at the plate in 14 at-bats, posting a .143 average.