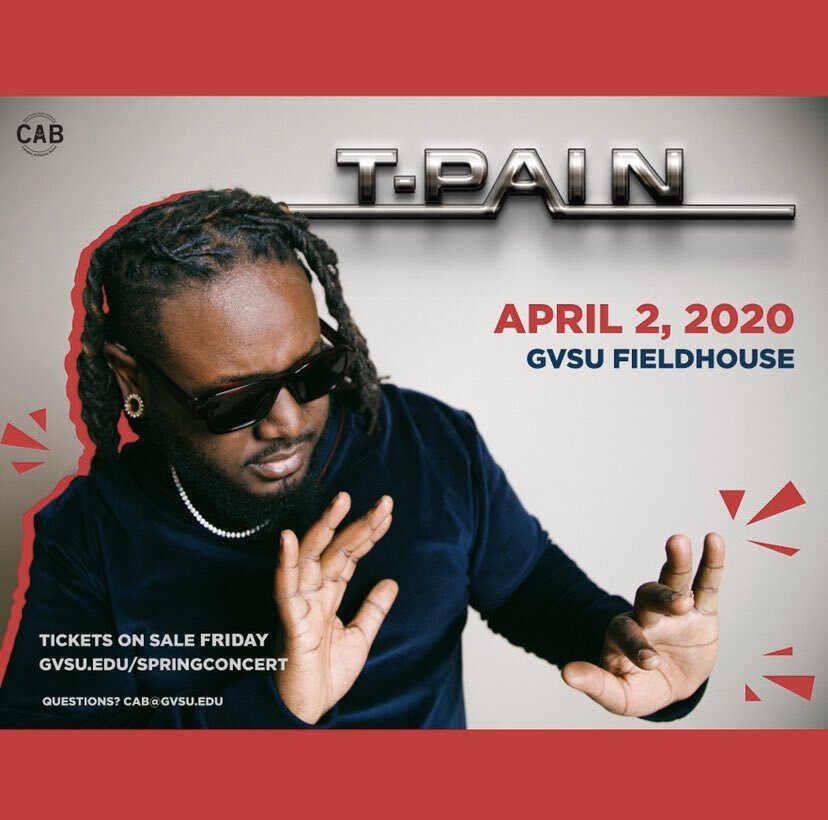 After a stream of clues, Grand Valley State University’s Campus Activity Board (CAB) announced that T-Pain would be headlining the university’s 2020 Spring Concert, set for April 2.

In the fall, CAB sent out a survey with a wide range of options for students to choose their top picks for the Spring Concert. For the second year in a row, GVSU students chose an R&B artist to perform on campus. R&B artist Blackbear was the featured performer last year.

T-Pain started out as a rapper in the group “Nappy Headz” in 2004. He was discovered by Akon soon after he joined when the group did a cover of Akon’s single “Locked Out.” T-Pain came out with his debut album Rappa Ternt Sanga in 2005. He ended up making a career primarily in singing instead of rapping.

Following his debut album, T-Pain’s second Album “Epiphany” reached number one of the Billboard Hot 100. This album includes two of his most well-known songs, “Buy U a Drank (Shawty Snappin)” and “Bartender”.

T-Pain has released six studio albums and 89 singles. His most recent studio album “1UP” was released in 2019. Many of the songs he works on are collaborations with other artists. He has been a featured artist in 71 singles, including “Low” by Flo Rida.

A defining characteristic of T-Pain’s music is his creative use of the Auto-Tune correction effect. He popularized the use of this software in R&B music which later influenced the work of other artists, especially Kanye West in his album “808s & Heartbreaks”

However, T-Pain showed he did not need Auto-Tune when he was named the champion of the first season of Fox’s The Masked Singer in 2019. The Masked Singer hosted by Nick Cannon is a singing competition show in which celebrities disguise themselves in costumes and compete in front of a panel of judges. Their identities are unknown to the judges and the audience. In his season, T-Pain wore a fuzzy blue monster costume with one eye.

CAB dropped clues as to who the performer would be a day prior to the announcement. To kickoff the series of clues, CAB shared an image from “The Lego Movie 2,” where T-Pain performed “Catchy Song” alongside Dylan Francis and That Girl Lay Lay.

It’s that time of year again, Lakers! Here’s your first clue about our Spring Concert performer this year. pic.twitter.com/HvxsGNinGC

Following the first tweet, a second post with Sully from the Disney movie “Monsters Inc.” references T-Pain’s appearance on Fox’s The Masked Singer, where he won the show disguised in a costume bearing a resemblance to the Disney monster.

Here’s your second clue! Keep your eyes out for a few more… pic.twitter.com/MZSwIAvXfI

The third clue referenced T-Pain’s Wiscansin University, which is his self-created mock university and merchandise store.

Clue number 3. Have you figured it out yet? pic.twitter.com/CgCM8XNzBe

Finally, CAB provided map coordinates to Tallahassee, Florida, which is where T-Pain was born. He also says the “T” in his stage name stands for “Tallahassee” as well.

Here’s your fourth and final clue. Any guesses?

Check back tomorrow morning for the official announcement! pic.twitter.com/j8TkZzPLIP