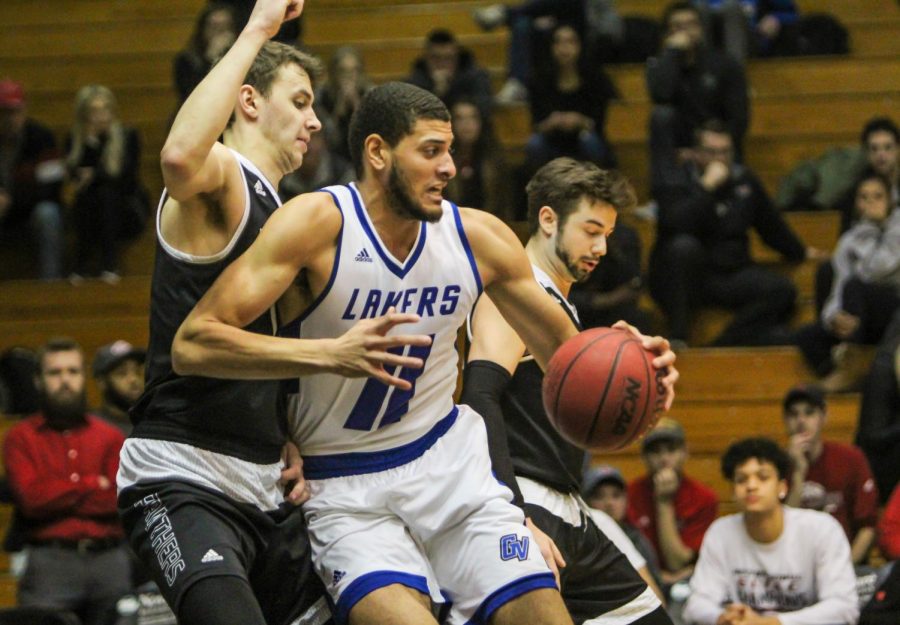 While it was the senior’s night to shine, it was two junior transfers in Isaac Gassman (24 points) and Christian Negron (20 points, seven rebounds, four blocks) who led the charge for the Lakers in a 75-66 win over the Davenport Panthers.

Seniors Jeremiah Ferguson, Jayden Hodgson and Ben Lubitz were honored in the win, as after tonight, the Lakers finish the season with a 22-6 record and a 15-5 record in the GLIAC, which is good enough for a second place finish in the conference and first in the division.

GVSU overcame a deficit as high as eight points in the second half, as it turned into a back-and-forth game in the final 10 minutes of play.

The Panther defense was no match for the screen-and-rolling of Negron, who ended the night with a season high and Laker career high in points, along with more than a few powerful dunks.

“We just try to practice getting in the side pick & roll in practice, even in the 2-3 (zone),” Negron said. “I know there are shooters on the other side, so they have to pay attention to them a lot, and I can just get that backside roll open a lot and find the angles to post up.”

GVSU whipped out a 2-3 zone of their own for most of the second half, as Wesley was happy with how his players confused the Panthers.

“We’ve switched up defenses a lot this year, and I think today was a perfect example of what we’ve worked on in practice,” Gassman said. “They didn’t really know what to do towards the end, we just did a really good job of communicating and held them down the stretch.”

Davenport’s Chris Pearl, who played two seasons with the Lakers, was part of the reason the Lakers were sweating out senior night, as he finished with 22 points and five rebounds, with 16 of those points coming in the first half.

While the Lakers were able to cool down Pearl, redshirt junior Chris Rollins was a different story, as he finished the game with seven made threes, 28 points and six assists, but he came up short down the stretch thanks to a staunch Laker defense.

With the GLIAC tournament kicking off next week, the 2-seeded Lakers will host the quarterfinal Tuesday, March 3 at 8 p.m. against Ashland.

“It’s great, we’re excited,” Wesley said, referring to this past season and hosting the opening round of the GLIAC tournament. “We’ve had a great year, quite a change from last year with essentially four new starters at the beginning of the year. To be able to come back and rebuild our team, it makes you feel good. I’m happy to achieve what we have in the regular season, and I hope we can achieve more in the postseason.”