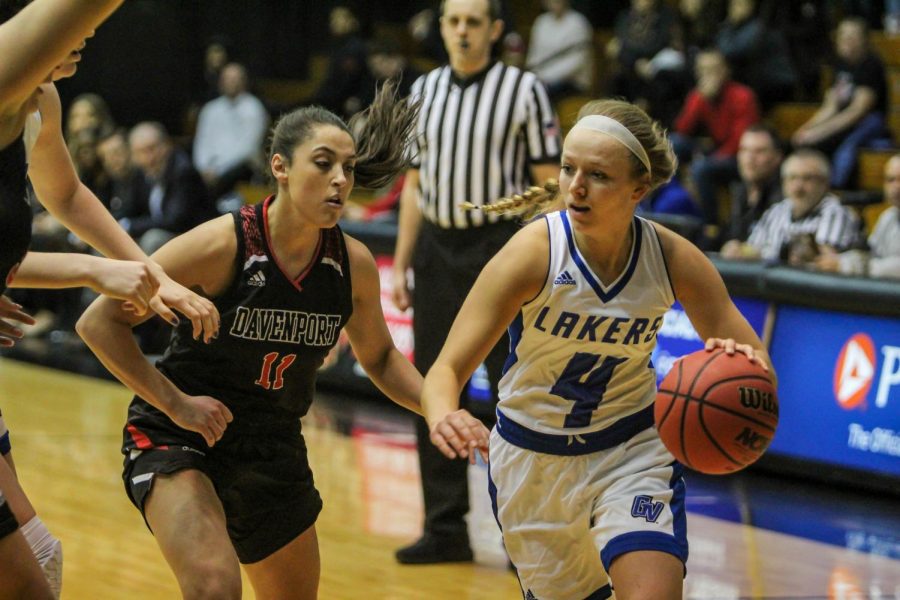 “You know, it’s going to be tough to see them go,” said Grand Valley State University women’s head basketball coach Mike Williams. “But today, I thought they did their job.”

In recent weeks, the No. 4 ranked GVSU women’s basketball team had gotten off to a couple sluggish starts. Thursday, Feb. 27 in the GVSU Fieldhouse Arena was a different story.

On senior night for GVSU’s winningest class of players in program history, the Laker’s five active seniors of Jenai LaPorte, Jenn DeBoer, Victoria Hedemark, Maddie Dailey and Cassidy Boensch all took the court as GVSU’s starting five, and boy did they play with energy from the get-go.

It started with senior center Cassidy Boensch winning the tip, then blowing by Davenport’s Jenna Falkenberg for a layup on the game-opening possession. On the very next possession, senior point guard Jenn DeBoer found fellow senior shooting guard Victoria Hedemark in the corner for a wide open three. It hit nothing but net.

As GVSU cashed in on offense, the Lakers also clamped down on defense. Senior forward Maddie Dailey rejected a three-pointer from the left wing into the Laker bench with just under six minutes to go in the first. At the conclusion of the quarter, GVSU had held Davenport to just 16.7 percent shooting from the field while also forcing three turnovers.

The Panthers used an 11-5 spurt to bring the Laker lead down to 30-17 in the latter minutes of the second quarter, but GVSU responded right back at the end of the frame with back to back three pointers from sophomore guard Samantha Gehrls and Hedemark near the two-minute mark. Hedemark then followed up her three pointer with a driving layup to the basket with 40 seconds left, and the Lakers took a 38-18 lead into halftime.

Both teams got off to a slow start offensively in the second half, scoring one basket a piece in the first three-and-half minutes of the third quarter. Davenport used a 12-6 run from 6:12 to 2:56 remaining in the frame to bring the deficit down to 14 points, but still in favor of the Lakers. DeBoer would respond with a three-pointer from the left wing to push the lead back to 17 to end the quarter.

The fourth quarter began with Boensch scoring on a layup out of the post to increase the GVSU lead to 19, which would then balloon to a game-high 25 point lead on a three pointer by LaPorte with 2:31 remaining in the fourth before the Lakers closed out senior night with a 71-46 victory.

“We talked about it after our last game (at Michigan Tech),” Williams said. “We wanted to play good basketball and I thought we did things well on both ends of the floor both offensively and defensively and we need to continue that going into the (GLIAC) tournament.”

“It was a good game with a great atmosphere,” Hedemark said after the game. “It’s always fun when you get to play with a group that you’re so close with, regardless of how we do really or how many points anyone scores, it’s always fun.”

Boensch also chipped in with a double-double. The senior center scored 12 points on 6-10 shooting while also pulling down 10 rebounds with three blocks and a steal in what was the senior class’ 104th career win and final regular season home game.

“Yeah it’s weird, I don’t think it’s hit me yet — you know, to think we’re not going to have very many more games on this home court,” Boensch said when reflecting after the game. “It’s just the people that are here in the community, all of our parents that travel to all the games and stuff. I’ve loved my time here so I don’t want to think about it all coming to an end.”

Having clinched the No. 2 seed in the GLIAC Tournament, GVSU will host the No. 7 seed on Tuesday, March 3 at 6 p.m. inside the GVSU Fieldhouse Arena.