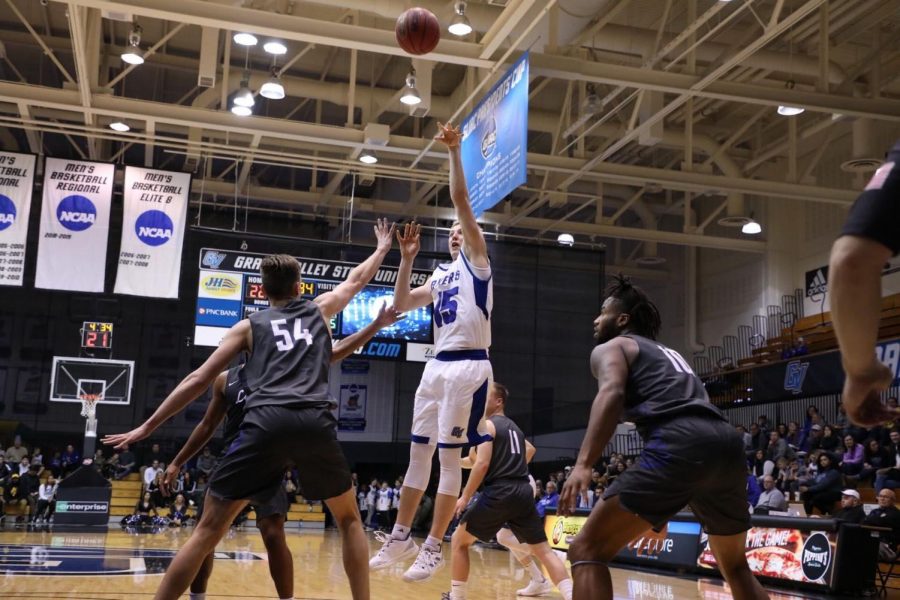 Towards the end of the first half, it was looking like the 2-seed Grand Valley State men’s basketball team would fall to the same fate as the 1-seed Ferris State Bulldogs, who were upset by the 8-seed Northern Michigan, 70-69.

While GVSU’s usual leading scorers in junior Jake Van Tubbergen (2 points, 1-7 on field goals) and senior Jeremiah Ferguson (9 pts, 3-10) struggled to get into a rhythm, the Laker role players stepped up big on that run, with seniors Ben Lubitz and Jayden Hodgson hitting big threes and freshman Austin Braun recording a clutch steal and lay-up.

Braun, who has spent most of the season on the bench and has only appeared in 8 games this season, had his best game of the season when it mattered most, putting up five points, five assists, and four steals in 17 minutes while providing the Lakers with a spark plug off the bench.

“My teammates and coaches always tell me to stay ready,” Braun said. “I got these three guys (referring to Lubitz, Hodgson and junior Isaac Gassman) in the hole ready to hit open shots, it’s easy when you got those shooters knocking down shots. My memory actually stepped up in those situations.”

GVSU was able to capitalize more than a few times on in-bounds plays, which are often seen as the special teams of basketball. Hodgson broke down one of those key second-half plays, which opened up Gassman for a three to give the Lakers a 12-point lead with 2:55 left in the game.

“One thing we stressed in the timeouts was a fix,” Hodgson said, regarding the in-bounds play. “That’s how it is every game, and that’s how we play. It’s all about staying composed and knowing, running a play we’ve run a million times, and getting an open shot to get us closer to win.”

With the win, the Lakers improve to 23-6 on the year. With their win and the Ferris State loss, the Lakers will host the remainder of the GLIAC tournament and will go on to face the 3-seeded Michigan Tech Huskies on Saturday, March 7 at 1 p.m.

Last time he made the trip to Allendale, MTU senior Kyle Monroe put up 53 points while shooting 10-13 from three. The Lakers are hoping to hold the Huskies’ all-time leading scoring to a few less points while getting the same result that they got in that Jan. 23 game: a hard-fought victory.

“It’s nice to travel sometimes, but we’d rather be here,” said GVSU coach Ric Wesley. “Michigan Tech is an outstanding team, and is probably playing the best basketball of anyone in the conference. It’s certainly not going to be easy, but that’s what March is all about. You know we’ll be ready.”