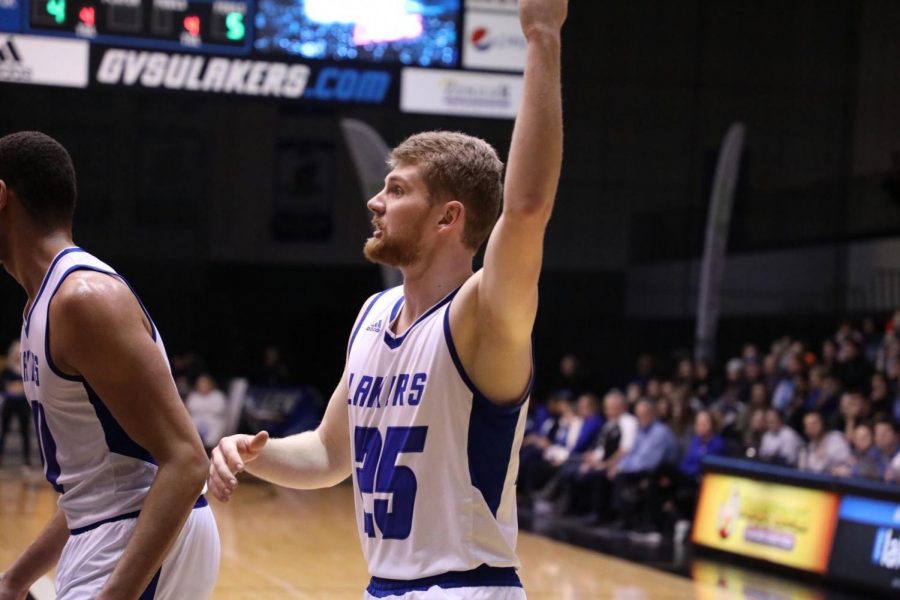 With 5:12 left to play at the GVSU Fieldhouse Arena, senior Jayden Hodgson made a clutch steal in the half court before falling and throwing the ball back over his shoulder to junior Christian Negron for a dunk to cut the Michigan Tech lead to 11.

Unfortunately for the Lakers, the two points on that dunk were the last two points that GVSU scored in the contest, as they fell to the Michigan Tech Huskies, 69-53. With the loss, GVSU basketball ends the regular season with a 23-7 overall record and a 15-5 record in conference.

While GLIAC Player of the Year Kyle Monroe was relatively quiet dealing with the flu (14 points, 4-6 from three), sophomore Owen White stepped up for the Huskies, shooting 81.8 percent from the field on his way to 27 points.

“Frantic might be too strong of a word, but we got very anxious,” Wesley said, speaking of those final few minutes. “We were trying to attack the basket a little earlier than we normally would like, we had a lot of wasted possessions and we didn’t make good decisions.”

Once the Huskies got a 15-point lead off a Dawson Bilski three with 7:58 left in the game, they never looked back. GVSU struggled to get over that double-digit deficit for most of the second half due to the stellar shooting and well-rounded play of Michigan Tech.

“We’re obviously disappointed, and I thought our guys played with good effort, but we just weren’t very efficient offensively,” Wesley said. “They’ve got such great size and skill, and that’s a lethal combination. We did a lot of switching, which I think helped us in guarding their three-point shot, but it gave them a lot of mismatches down low.”

Negron was the leading scorer for the Lakers, racking up 18 points and five rebounds. Most of his scoring came on a lot of tough post moves inside thanks to the size advantage he had over Michigan Tech’s Trent Bell, but he was out-muscled once the Huskies brought in their lumbering post in Ryan Schuller.

“Scheuller’s got such a wide body,” Negron said of the Huskie, who was listed at 6’10” and 260 lbs. “They knew that we were trying to go inside to me a lot, and I was just trying to post hard. He’s hard to get around, and even if you do, he’s going to contest it. It affected me a bit, and if we get a chance to play them again, I got to use my quickness a little more.”

It was an unusual site to see for the Lakers post-game, as this loss clearly hit the team hard with tears starting to well up in the seniors’ eyes as they left the court.

Hodgson and Wesley agreed that GVSU has a strong case for an at-large bid in the DII NCAA Tournament, being that the Lakers were ranked in the top 25 most of the year, were ranked as a top-4 team in the region at the end of the year and finished the season second in one of the nation’s toughest conferences.

“It’s hard to imagine this is it,” Wesley said. “To win the (GLIAC) South division, to get to the semifinal in the conference tournament, the number of wins we had — if that’s not good enough to get a bid, then our league needs to think long and hard about what we’re doing. I would argue Ferris, us and Michigan Tech are on of the top 64 teams in the country. I don’t think this is the end for us.”

The bracket will be announced on Monday.