With GR Film Challenge on hiatus, GVTV creates their own 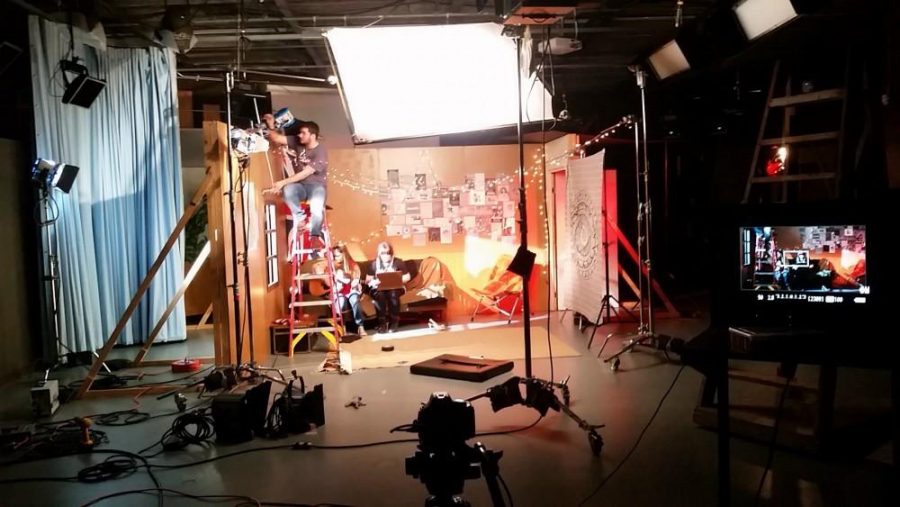 For the past three years, Grand Valley State University’s student run television station, Grand Valley Television (GVTV), has participated in the 36 Hour Film Challenge at the Grand Rapids Film Festival and won awards in Audience Choice and Editing for two of them. However, as of January, the challenge was put on an indefinite hiatus.

In turn, GVTV’s executive board has decided to create and hold their very own 50 Hour Film Challenge from 5:30 p.m. Friday, March 13 to 8 p.m. Sunday, March 15. The challenge is not limited to students in GVTV, as all students are welcome to sign up for free.

During their 50 given hours, the teams must each write, produce, record, edit and publish their own 3-7 minute short film. The submitted work will then be judged by a panel of GVSU Film and Video professors, Spencer Everhart, Toni Perrine and Joel Potrykus. Judges will use rubrics which evaluates each team’s cinematography, editing, acting and writing.

Winners of each category will be announced and given awards at GVTV’s Premier Night on March 29. The event will include food, screenings of the films and time to appreciate the work of all groups involved.

“We’ve had to create an entire competition from scratch,” Macciomei said. “So it began with crafting the rules and guidelines that will be in place and available to view for all competing teams. The timeline, the restrictions, how to submit and how the judges will evaluate films are all details that need to be thoroughly thought out and defined before we could even advertise for the competition.”

One of the key rules ensured no team had an advantage over another. Teams must follow a prompt which will not be announced until the beginning of the challenge.

“This prompt is an added element of challenge for the filmmakers as well as a deterrent from filmmakers who wish to create the story of their film before the 50 hours have even begun,” Macciomei said. “By adding this surprise element to the competition, it puts the teams on a more even playing field to all work within the time constraints we have given them.”

The organization of the groups is one thing GVTV leaves in the hands of the participants. The Head Writer for Late Night Brew, GVTV’s comedy sketch show, Athena Jasman, said that it will be up to the students to decide who takes what role in their respective films.

“Basically, everyone is forming their own groups and as such we get to decide our own positions for our own films,” Jasman said. “For my group, I will likely be a writer and producer or co-producer, meaning I will have a role in organizing responsibilities such as where we are meeting, what tasks we’ll be completing in which order and making sure every necessary role is fulfilled. At the very least, we’ll have a director, producer, writer(s), editor(s), a cameraman and boom operator.”

Once the prompt is given and the challenge begins, Macciomei and other members from GVTV will act as competition managers on call to assist with any questions or complications the teams may face.

Macciomei said that he is excited to experience the current and future outcomes of the competition. He hopes that this year will serve as a good pilot year for the challenge and that it will become a staple event every year for GVTV and GVSU.

“Short term, I’m really excited to see what amazing films some of these students create,” Macciomei said. “Long term, I’m looking forward to seeing this competition grow in scale and reputation over the next few years to be something people look forward to and get excited about every year.

Not only is Macciomei excited about the challenge as a new event, but also as a learning experience for students.

“The ability to work in an environment that forces communication, collaboration and confidence is an incredibly rewarding experience, and one that many people, filmmakers or not, should experiment with,” Macciomei said. “The stakes are really low, but the opportunity to experience that ticking clock in a very real way is something that teaches you how to properly budget your time and the time of the people you are working with.”

Producer of GVTV’s Late Night Brew, Savannah Wright, said she is looking forward to the fun of working with a group on a time limit.

“I’m really excited to get to work with everyone,” Wright said. “It’s always fun to be a part of a crew or to write something new. So, to do it all in such a small time should be pretty interesting. I also just can’t wait to see what everyone makes, there are small guidelines that everyone has to follow but to see how everyone takes those guidelines in their own way is really fun.”

Jasman said she is excited for this aspect as well, and that working with a team of students in this type of environment helps her through decision making in creating new films.

“For me, the hardest part of the challenge might be sticking to one idea and being confident in it enough to not constantly be scrapping and reassembling,” Jasman said. “However, having a team will alleviate that difficulty of decision making, since it won’t just be me in my own head.”

Regardless of the outcome of the films, Macciomei hopes students use this challenge to become more involved in GVTV.

“GVTV has never held an event or a competition that is open to any GVSU students who are nonmembers,” Macciomei said. “This is a time where we can get people involved in our organization in ways that they haven’t before, and we’re very excited for that.”