Tradition of dominance continues as GVSU approaches GLIAC final rematch against No. 2 Ashland 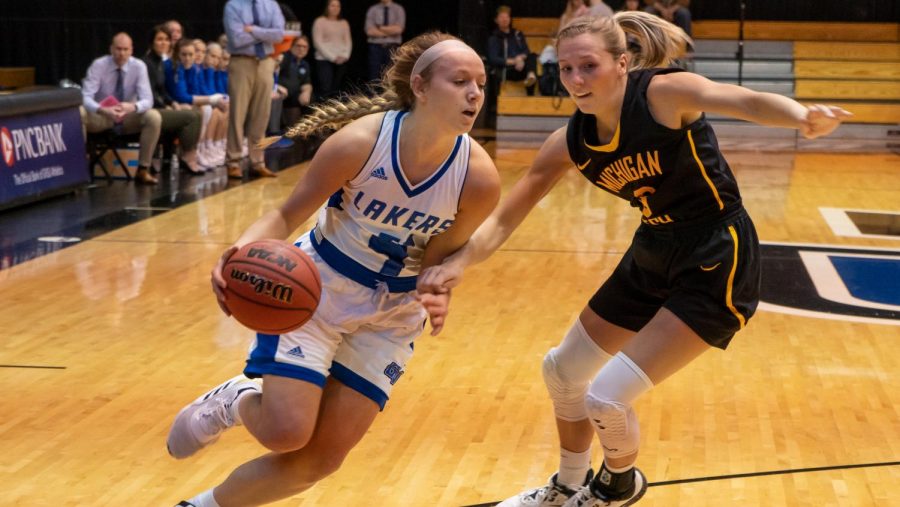 Entering the game with a record of 27-2 and a rematch looming with fellow conference juggernaut Ashland in the GLIAC tournament final, all the No. 4 ranked Grand Valley State University women’s basketball team had to do was take care of business against the Warriors of Wayne State in the GLIAC tournament semifinal on Saturday, March 7 in Ashland, Ohio.

The Lakers certainly did just that.

After beating the Michigan Tech Huskies on Tuesday, March 3, after shooting a season-high 50 percent from behind the arc, the GVSU women’s basketball team defeated Wayne State, 75-49, Saturday afternoon at Ashland University in their semifinal matchup. The Lakers improve to 28-2 overall and move forward to take on undefeated and No. 2 ranked Ashland in the GLIAC Tournament finals on Sunday, March 8 at 3 p.m.

“We played with a lot of belief and a lot of confidence, you know offensively,” said GVSU coach Mike Williams. “We have been doing that a lot more lately, a great job on offense, you know Cassidy (Boensch) had a great game out there today, Maddie (Dailey) and Jenn (DeBoer) played well with their contributions as well.”

Boensch also took home the hardware, as the Au Gres, Michigan native won her second consecutive GLIAC Player of the Year award. So far on the season, Boensch has continued her dominance as the best center in DII Women’s basketball, averaging 20.4 points, grabbing 9.2 rebounds and blocking 3.2 shots per game.

Although the Lakers were able to perform well on offense and be recognized conference-wide for their performances all season long, the reason behind their success against the Warriors was what has been their penchant all season: suffocating defense.

That consistency on the defensive side of the ball also led the Lakers to earning four all-GLIAC defensive team nominations in Boensch, guards Taryn Taugher and Victoria Hedemark and forward Maddie Dailey.

The Warriors jumped on the Lakers early as they led 9-4 through the first three in a half minutes of play. GVSU ended the quarter on a 12-2 run and took a 16-11 lead into the second quarter. Senior guard Taryn Taugher and Dailey each buried three-pointers early in the second frame to extend the GVSU margin to double-digits. The Lakers continue to build the lead late in the first half and led 36-24 at the halftime break.

Wayne State cut into the deficit in the third quarter, trailing just 43-38 with 2:47 left in the third quarter. The Lakers quickly answered and went on a 9-2 run, sparked by a pair of Taugher three-pointers, to lead 52-40 entering the fourth quarter. Wayne State came within 11 points at the 8:25 mark of the final quarter, but GVSU built up a 26-point lead by the time the buzzer sounded, 75-49.

“We knew they’re a good team, you know, we played them twice (before today) and you know that they’re playing really competitive basketball of late,” Williams said. “They played Ferris (State) which is a really good team and they went to Ferris and beat them so you know they got a lot of weapons and we were fortunate enough to go out and execute today and get a solid win against a team that, you know, has given us trouble in recent years.”

Following GVSU’s contest with Ashland, the NCAA Tournament Selection Show will be aired on NCAA.com at 10 p.m. Check back on gvsulakers.com and @gvsuwbb on Twitter for a link to the show.