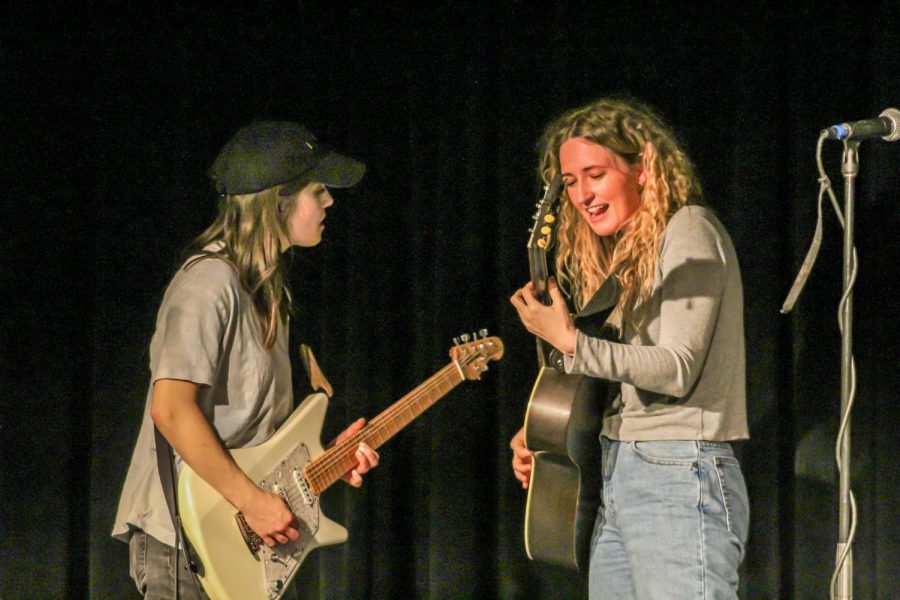 The Campus Activity Board (CAB) held one last event for students before classes went online.  On the night of March 11, The Coffee House Series featured Nashville-based, girl-duo Sawyer in Kirkhof Center’s Area 51.

After receiving positive feedback from the previous Coffee House Concert with Drakeford, CAB’s Director of Live Music Terry Jones said that CAB decided to keep much of the event the same as last time. They once again provided donuts, hot chocolate and coffee for students who wanted to relax and enjoy music in a coffee house setting.

CAB booked Sawyer through the National Association of Campus Activities (NACA), the same organization they used to find Drakeford.

“I thought it would be so nice to have a girl-duo band come because we’ve never had an all-female band before,” said Jones.

Musical soulmates Emma Harvey and Kel Taylor were both songwriting majors at Belmont University in Nashville, Tennessee when they became friends and started making music together. They said one of the defining things that really brought them together and fueled their songwriting was when they both broke up with their boyfriends on the same day. They continued to collaborate and write together, and about a year later, they started Sawyer.

Harvey and Taylor said that their friendship is a foundational part of their band. While they claim to be opposites, their personality and musical differences bring new twists to their sound, which work together to complement one another.

Taylor said that her specialty is primarily in lyric writing while Harvey, who she describes as a “guitar wizard,” is skilled in writing music. While it is different for every song, the two often come together with their own ideas and develop it into a song. Sometimes this process takes a day, but sometimes it takes three weeks. They also collaborate with other people often and write with them.

Songwriting seems to be something that has always been rooted in the duo’s friendship, bringing them closer from the very start.

“The creating element is so vulnerable you can’t work together in a creative sense and not bring your full self,” Taylor said.

When two artists decide to commit to a band, they are often deciding to mesh their personal lives and become financially bound to one another. Since they are friends, Taylor and Harvey spend a lot of time together outside of work in addition to their work. Taylor even compared it to “a marriage minus the romance.”

“I don’t know if I could do this if I wasn’t friends with the person I was spending 90 percent of my time with,” Harvey said.

As former student musicians, Taylor and Harvey understand the struggles felt by artists finding their footing while still in school. They said it’s important to collaborate and to break the rules.

“Let the song take you where it takes you,” Taylor said.

While unfortunately many of Sawyer’s gigs through NACA have been canceled due to many universities closing for the COVID-19 pandemic, they were able to make it to GVSU just in time. They are now planning on going on tour with folk-pop band Penny and Sparrow for a month-long tour in April.