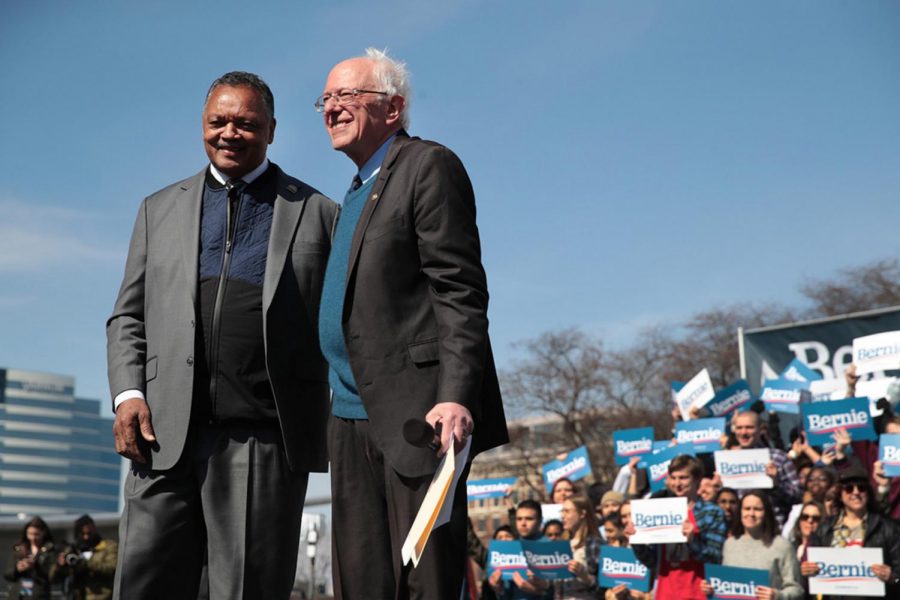 The Rev. Jesse Jackson announced his support for Vermont Senator Bernie Sanders’ campaign for president during a rally in Grand Rapids on Sunday, March 8.

Jackson, a clergyman, became the second African-American to mount a nationwide run for president of the United States when he announced his candidacy in 1983. The civil rights icon rose to prominence by working with Dr. Martin Luther King Jr. and founding Operation People United to Save Humanity, an organization that promoted black self-help and organized boycotts.

During his remarks, Jackson praised Sanders for his lifelong advocacy for civil rights and empowering minority communities.

“When we’re together, everybody wins,” Jackson said. “Everybody in, nobody out.”

When Sanders took the stage, he described how the Rainbow Coalition, a multiracial movement founded by Jackson in 1969, paved the way for Barack Obama to become the first African-American president of the United States. Sanders expressed his desire to build upon Jesse’s legacy by fighting against all forms of discrimination.

“Now what Jesse Jackson has spent his whole life talking about and that I believe is that campaigns like this are not about me, they’re about us,” Sanders said. “This campaign is of course about a presidential election, but it’s about more than that. It’s about creating a movement.”

In a wide-ranging speech, Sanders promoted universal health care, criminal justice reform and a national $15 minimum wage. Underlying these policies was a call for people of all racial and socioeconomic backgrounds to unify in favor of a progressive platform and defeating President Donald Trump in the 2020 presidential election.

“How do we unify the American people?” Sanders said. “I’ll tell you how. You give them an agenda that all working people support.

Sanders expressed confidence in his campaign’s ability to win Michigan and recapture the momentum that propelled him to victory against former Secretary of State Hillary Clinton during the 2016 Democratic Primary.

With 125 delegates up for grabs, Michigan represented a key battleground state for the Sanders campaign. Sanders faced an uphill battle against former Vice President Joe Biden, who gained momentum after winning nine of the fourteen states that voted on Super Tuesday.