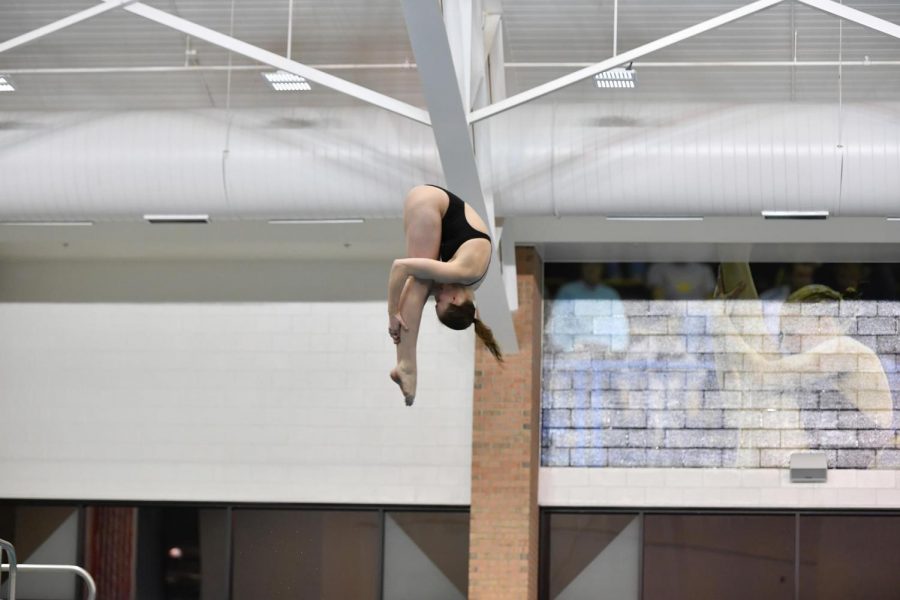 The women’s team was in 8th place with 36 points before the event was canceled from the ongoing COVID-19 outbreak, and the men were 14th with 30 points. Senior Melina Goebel finished eighth in the 1,000-yard freestyle, coming in at 10:02.35 and nabbing an All-America honor.

While not being able to compete for his title again in the 200-yard backstroke before the event’s cancellation, senior Harry Shalamon finished 3rd in the 200 yard IM with a time of 1:46.09. Sophomore Jesse Goodyear also wasn’t able to compete in his best event, the one-mile freestyle, but still made a difference finishing in 13th place in the 1,000-yard freestyle at 9:12.94.

All of these top finishers and other competitors for GVSU at the event contributed to the team’s success, but none quite like senior diver Mikayla Karasek. She won the national title in the 3-meter diving event, shooting up the board five spots to end with a score of 473.50. After finishing fifth in the event last season, Karasek put all of her hard work and experience together to win the title in her final national championship.

Karasek’s diving career started in Elkhart, Indiana. She participated in gymnastics from a young age until her sophomore year in high school. After growing tired of the sport and still wanting to compete athletically, she tried out for the diving team at Elkhart Central High School.

Karasek initially thought the transition from gymnastics to diving would be easier than it was, but she still excelled after a great deal of effort and practice. While growing frustrated with the sport at times and going through growing pains, Karasek was a natural and fell in love with diving. She wasn’t alone however in pursuit of learning and competing at the highest level. She had several teammates behind her and a mentor in her coach Tom Adams.

“Diving in high school was really fun — we had a big team and lots of my friends were on the team with me, and my coach was awesome,” Karasek said. “He really pushed me to explore new things and do new dives as well.”

Karaskey earned All-Conference honors her senior year of high school. She soon began to search for colleges where she could continue to compete in diving. She contacted GVSU head diving coach Steve Burciaga, signifying her interest in being on the team.

Shortly after sending that email, Karasek took an unofficial visit to GVSU and liked the campus and team. It was only until her second visit to Allendale, this time official, that she fell in love. She loved the campus, located in Michigan close to her hometown, and knew that Burciaga was the right coach for her.

Karasek exponentially began to excel at Grand Valley. Her freshman year the women’s team won the GLIAC championship. Karasek contributed by finishing third in both the one meter and three meter diving events. Her first year on the team was new to her, but also extremely enjoyable.

Karasek appreciated being a part of something that was bigger than herself and exceeded her own expectation on how dominant she could be at diving, finishing fifth on the one meter in nationals that season. Karasek continued to improve her technique and diving abilities for the rest of her college career. Her hard work has led to her senior year, this year, being one of her favorite seasons.

“My senior year has been really great, besides the abrupt ending,” Karasek said. “I did really well at most meets, I got the pool record at Calvin University at the invitational meet, I got 1st on one meter at conference, GLIAC diver of the year, and finishing with a national champ title was way more than I ever expected. Overall, this has probably been my favorite season, not because of all my accomplishments, but because I really focused on just having fun with diving this year and appreciating the time I had left.”

While her time on the Grand Valley diving team is up, her memories from the team will live on forever.

“One of my favorite memories from being on the team would be winning conference my freshman year; it was the first time the women’s team had won in like 9 years and it was just a really exciting meet, and it felt awesome being a part of something like that,” Karasek said. “Whenever the divers had their own separate van or rode the bus by ourselves during big meets because of our separate schedule, it was also a lot of fun. There were lots of inside jokes and funny moments that happened between the divers during those times.”

Karasek couldn’t have ended her collegiate diving career on a better note. Finishing first at three meter diving in nationals is arguably one of the greatest GVSU diving moments, let alone a personal best for Karasek. She currently studies psychology at Grand Valley and plans to get a specialist degree in school psychology once she graduates from GVSU.

Karasek has been one of the greatest women diver in Grand Valley State history and has been fascinating her technique of twist, spins, and twirls off the diving board. Her diving career may be over, but with the hard work she’s put into diving, she’ll be successful out of the pool much as she was diving in it.