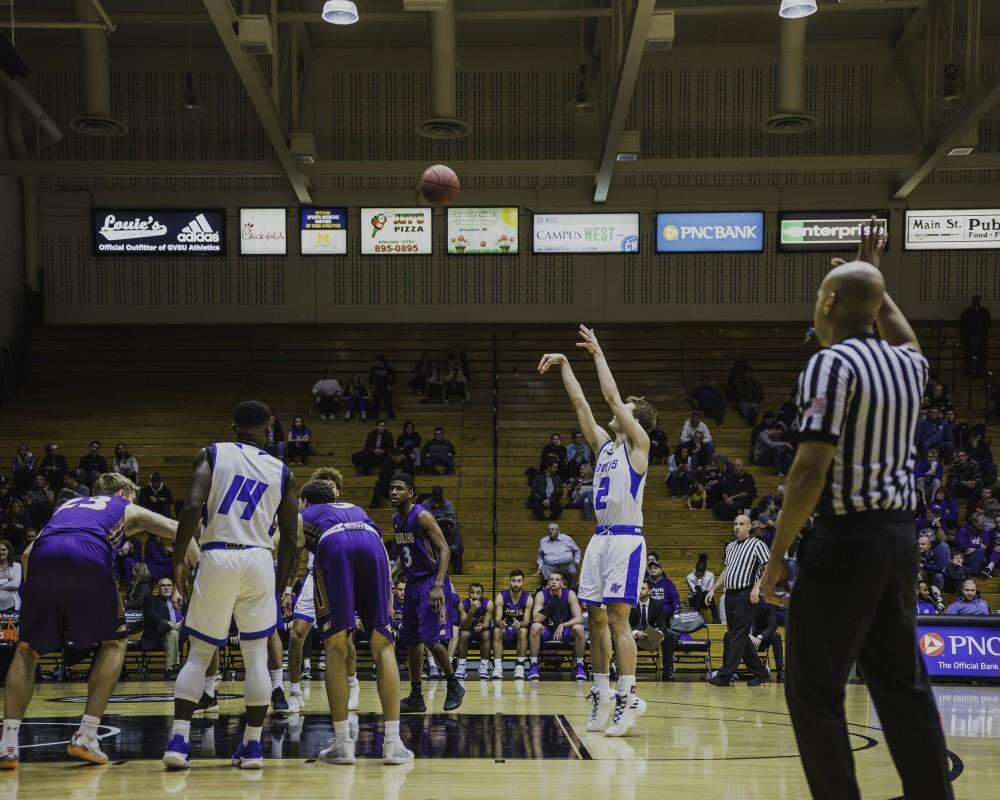 While the Grand Valley State men’s basketball 2019-20 season ended prematurely after controversially not being placed in the NCAA tournament, one silver lining to cap off the year was the All-American bid for junior Jake Van Tubbergen, who learned of the news on Tuesday.

Van Tubbergen led the Lakers in both points per game (18.4) and rebounds per game (10.0) while racking up 14 double-doubles, 15 20-point games and 44 steals to help GVSU earn place first in GLIAC South, a GLIAC tournament semi-final appearance and 23 wins.

His 551 total points ranked 10th in GVSU history in a single season, while his 300 rebounds ranks eighth in Laker history. Van Tubbergen is the first Laker to earn All-American status from the National Association of Basketball Coaches since Callistus Eziukwu in 2007-08.

“When I heard the news, it was a really good feeling,” Van Tubbergen said. “Obviously, putting in all the hardwork and all that goes unseen, this is a recognition of for all that hard work that nobody really sees, all the hours, being in the gym to workout by yourself and shoot and everything.”

Van Tubbergen was humbled when he first heard the news, with immediate gratitude going towards the teammtes, coaches and team managers that helped him go from a scrawny freshman to one of the best DII basketball players in the nation.

“If it weren’t for them, there wouldn’t be any award to be given to me,” Van Tubbergen said. “I give them all the credit in the world because they put me in a position to be able to do what I could do.”

Van Tubbergen cited his best game of last season being the thrilling overtime win against Michigan Tech, where at the GVSU Fieldhouse Arena, the All-American had 25 points, 12 rebounds, and went 6-9 from the free throw line to help secure the Laker win.

Over the national sports hiatus, Van Tubbergen has spent his free time keeping up with his school work, doing pushups, golfing, playing Call of Duty: Modern Warfare and keeping in touch with his teammates, who are the people he misses most during the stay-at-home order.

“I try to talk as many of my teammates as I can everyday,” Van Tubbergen said. “It’s a lot harder since you’re used to seeing them at this time, but with the circumstances, it’s been a little strange.”

When he is able to frequently leave the house and start fully preparing for next season, Van Tubbergen would like to improve his outside game and stay consistent shooting from the three-point line, which would come in handy when he tries to play professionally overseas after his senior season.

When prompted to cite his goals for next season, the Holland, Mich., native said he wants to earn all the team trophies, including but not limited to winning the GLIAC regular season and conference tournament, make the NCAA tournament and perhaps even make a run at a national championship.

Van Tubbergen has mentioned on social media and reiterated in the interview that this year’s squad will be playing with a chip on their shoulder, using their shocking absence from this year’s NCAA tournament to propel them to success for next season.