Cassidy Boensch: A Career in Review for a Laker Legend whose collegiate career was cut short 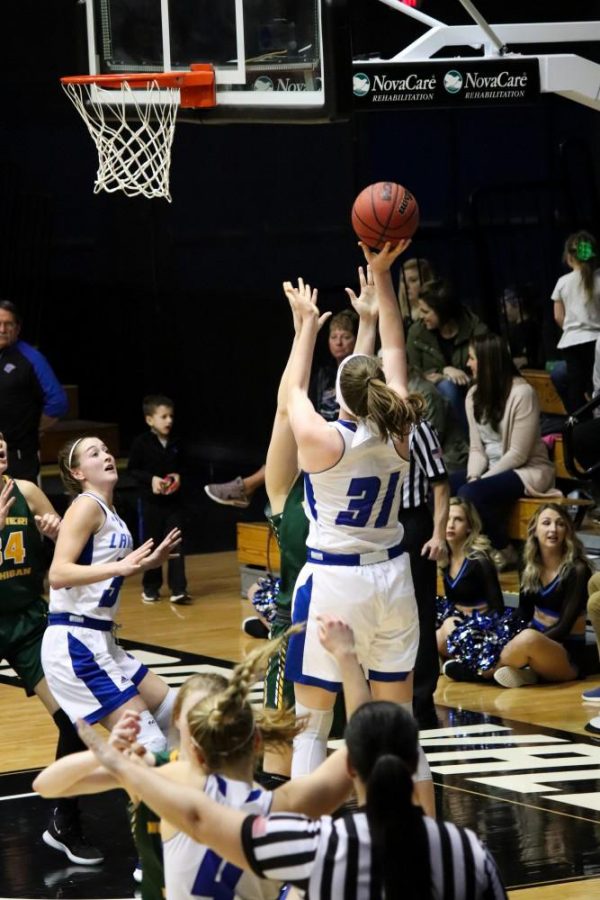 “Nothing was confirmed until we got to the hotel,” said Grand Valley State University’s all-American center Cassidy Boensch. “The NCAA tweeted it out on the bus ride down, but we didn’t really know what was going on and it was really hard to believe it until our coaches gave us the news.”

That was Boensch recollecting the moment her and her teammates found out the NCAA had cancelled their winter and spring sports championship schedule during their bus trip down to Springfield, Missouri for the NCAA DII women’s basketball tournament on March 12.

Tears fell down the faces of GVSU’s senior class soon thereafter as they came to the melancholy realization that they had played their last game together. Of course, that does not mean that the group should not be recognized for the greatness they have displayed on the court over the last four years, especially in Boensch’s case.

Any women’s basketball team across the country that matched up with Grand Valley State University over the last three-plus years knew what they were getting into and who they would specifically have to stop.

That conversation began and ended with Cassidy Boensch, and judging by how opponents have fared over the entirety of her career, there is a strong argument that she hangs up her uniform as one of the most dominant player to ever don Laker blue, even if her senior season was cut short due to the COVID-19 pandemic.

Boensch currently possesses a laundry list’s worth of awards, plaudits and records. The senior center was voted 2019-20 COSIDA Academic All-America of the Year as the nation’s best DII women’s basketball player who also performs exceptionally in the classroom.

“I don’t know if there’s a word for it — it was unbelievable,” Boensch said of when she found out she had won the award. “Our assistant coach Kara (Carlson) kind of told me in the hallway (before one of our games) and I was like, ‘What?’ Over the last four years I’ve always wanted to equally dedicate myself in sports and in the classroom and it just makes me feel so grateful to have the people I have around me in life.”

Boensch finished her career with a 3.9 GPA in the classroom and is currently aiming to get a master’s degree in public health and osteopathic medicine after she finishes her basketball career.

While the Au Gres, Michigan native has asserted herself as one of the best frontcourt players in the country and in program history, Boensch was not always on a fast track to becoming the anchor to GVSU’s success on the court over the last four years. In fact, early on during her freshman and sophomore seasons Boensch struggled with her confidence on the court. She said once she discovered a belief in herself and working through her mistakes, she blossomed into the dominant player that she is today.

“I’m a perfectionist, so that’s something that worked against me a lot early on in my career, so once I figured out how to get past little mistakes that allowed me to keep my confidence and build on it,” Boensch said. “I learned that it’s okay to make mistakes and it’s okay to have gaps and that helped me make a big jump from my freshman to sophomore year.”

That confidence allowed Boensch to earn a starting role late during her sophomore year, which featured her making nine starts to end the season and leading GVSU in scoring at 13.1 points-per-game. From there, Boensch worked on other nuances of her game like strength and conditioning, being able to guard quicker players and expanding the range on her jumpshot out to 15-18 feet.

“I always wanted to make sure that I wasn’t a liability on defense if we had a smaller, quicker matchup and strength — getting in the weight room — was something coach (Williams) has always pushed since I got here as a freshman,” Boensch said. “Beyond that, I never really stretched out to the 3-point line as much, but I wanted to make it known that I could knock down a 15-footer and you would have to guard me from there.”

During her junior year campaign, Boensch averaged 19.6 ppg, 11.6 rpg, and 1.6 apg while also shooting 57.2 percent from the field and averaging 3.1 blocks per game as well. This was highlighted by a regular season conference championship-sealing performance against Ashland on Feb. 2, 2019, where Boensch scored 31 points and pulled down 13 boards to help GVSU secure a last minute 73-71 win over the perennial power from Ohio.

Less than two weeks later in a game against conference rival Saginaw Valley State on Feb. 14, 2019, Boensch scored a career high 38 points to go with 23 rebounds, which gave her the highest single game combination of points and rebounds in program history.

Boensch followed up her junior season by continuing to do what she had done the year before: working to become a more well-rounded player. Boensch saw slight upticks in points per game and field goal percentage as she jumped from 19.6 to 19.9 and 57.2 to 58.0, respectively, but the two-time reigning GLIAC Player of the Year also made major strides as a passer and on-ball defender, improving her assists per game number from 1.6 to 2.4 and total number of steals from 30 to 48. These marked improvements led to her being selected as a WBCA second-team All-American as well as the COSIDA Academic All-America of the Year.

With so many awards and recognition for her play out on the court, the adulation may inflate the ego of any person, but not Boensch. Looking back on it all, she views that without the resources and people put in place around her at GVSU, she would never have become the player that she is today and recommends that anyone who puts on a Laker uniform should fully take advantage of the world around them.

“Coach (Mike Williams) always says that it comes down to the player, but there are so many things available to you at Grand Valley that can help you and support you and allow you to become the best player you can be,” Boensch said. “I’m just so grateful for everyone at Grand Valley and how much work that they have put into me, so just take advantage of your opportunities, be willing to buy into a program and trust in the process and believe me, it will work out for the best.”

Moving forward that is just what Boensch plans to do; continue to buy into herself and trust in the process, as Philadelphia 76ers all-star big-man Joel Embiid would say. With her GVSU playing days now in the rearview mirror, Boensch still hopes that process includes continuing her basketball career professionally abroad outside of the United States.

“I want to hopefully go to Europe and play in leagues over there,” Boensch said. “I just think it would be an amazing opportunity to keep playing basketball and live in a whole different side of the world, in a different culture.”

As a fellow senior who has had a front row seat to all of the experiences that have been cut short due to coronavirus, I feel empathy as I have overwhelmingly enjoyed my experience covering Boensch and the rest of her teammates on the court. So here’s to hoping that Boensch continues to find success on and off the court far after her days as a Laker are over. Her selfless mindset, work ethic, innate intelligence and athletic ability allowed her to become a once-in-a-generational player for GVSU, which I am grateful for having witnessed suit up in Laker blue.

As an extension of the GVSU sporting community, we thank you for the memories and representing our community the way you did, it was an exceptional career to watch unfold.