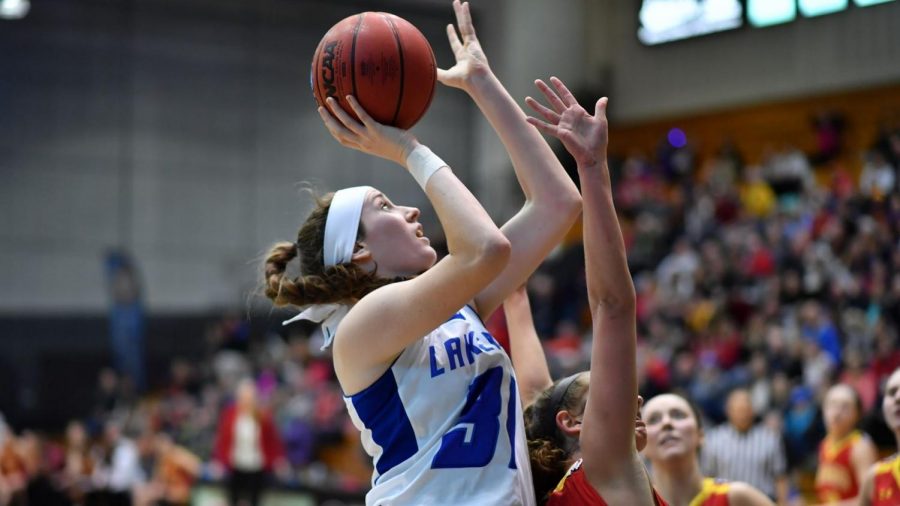 I would like to start this by making a few disclaimers.

I am no voting body — or representative of one — that selects any of the All-America, All-Region or All-Conference teams published annually across the country for any of the various varsity sports where competition occurs at any collegiate level.

I am simply a college sports writer for the Grand Valley Lanthorn who overwhelmingly enjoys his job covering athletics at Grand Valley State University. With COVID-19 limiting the content I can produce for the Lanthorn, I have turned my attention toward reflecting on the history of athletics at GVSU and highlighting some of the many fine examples that have occurred in Allendale in recent memory.

One of the examples I would like to highlight is the glut of talent that has come through the GVSU women’s basketball program over the past decade by putting together my own 12-woman, all-decade team featuring some recent faces along with a few that starred in the GVSU Laker blue 5-10 years ago.

Another disclaimer I would like to make is that I selected this lineup to cater more toward today’s style of basketball that features a lot of predication on spacing, 3-point shooting and an inside-outside flow.

So without further ado, allow me to introduce you to my all-decade starting five.

This was perhaps the hardest decision that I had to make in terms of who got the nod at point guard because of the litany of backcourt talent GVSU has had over the last 10 years, but DeBoer gets the slightest of nods over her Laker brethren for a number of reasons.

The primary reason DeBoer gets the start at point guard is because she has been the primary ball handler and play initiator for three years during the most successful four year stretch in program history where GVSU went a combined 107-22. In addition to holding the keys to a consistently successful offense, DeBoer was also a well-rounded weapon on her own for the Lakers.

All-time, DeBoer ranks fourth in school history in 3-pointers made (173), tied for fourth all-time in single season assists per game (4.9, ‘19-’20), and fifth in total assists doled out (391). In a career-defining game during her junior season against then no. 1 ranked Ashland University on Dec. 6, 2018, DeBoer dropped a career high 32 points on 12-19 shooting from the field and 6-11 from beyond the arc.

This one was an easy choice. During her playing days in Allendale, Taylor was one of the most dominant guards in the GLIAC conference. Known for her ability to drive with either hand and attack the glass on both ends of the floor as a bouncy guard, Taylor also developed a 3-point shot as her career went on that allowed her to become one of the best scorers in program history.

After wrapping up a career that featured an all-America selection during her junior year, Taylor currently sits seventh all-time in total points scored (1,466) and career points per game (13.4). Taylor was also the only player of 16 considered for this team that crossed the 1,000 point, 500 rebound, and 200 assist threshold for her career.

With a classic floor general at point guard, and an athletic slasher who’s first option is to attack the basket, the next logical option is someone like Dawson,w who has a perimeter shooting game but can also move inside-outside as need be.

At the peak of her game, Dawson was a combo forward who was efficient from beyond the 3-point arc, but could also post-up, shoot the mid-range, and draw contact to get to the free throw stripe at a rate of 4.6 times per game over the span of her career. Dawson was also a nuisance on defense, as her 80 steals during the 2015-16 season was the highest total recorded by any Laker throughout the decade, and seventh highest season total of all time.

I faced a dilemma in figuring out who started at three and four, but with Dailey coming in two inches taller than Dawson and being more skilled at shot rejection–in combination with Dawson having a more polished outside game–I gave her the nod at the four-spot instead of the three.

Dailey has been a player who has shown continual development under current GVSU women’s head coach Mike Williams, going from little used reserve during her first two seasons in Laker blue, to a bonafide two-way small forward that can shoot, defend, run the floor in transition, and provide a legitimate no. 2 scoring option to the starting center on this team.

Hands down did not even have to give this one a second thought. Boensch is unquestionably the best player to play women’s basketball in Allendale over the last 10 years and is arguably the best to ever don a Laker uniform.

It is hard to even find a place to start when highlighting Boensch’s talents. Need a high pick and roll player that you can dump it in down low to over the top of the defense for an easy deuce? Boensch. Need a girl that consistently possesses the highest basketball IQ on the court? Boensch. Need someone who throws a block party every time she steps on the court? Boensch. Need a big with good enough handles and footspeed to blow by opposing bigs in the post or in straight up isolation? Boensch. Need a center that can pull up from mid range and convert two-thirds of the time because no one can match up against her height and wingspan? Boensch. Need a big that can find the open shooter on the wing or a cutter running baseline when she draws the double team? Boensch. The only thing Boensch does not have in her arsenal is a 3-point shot, which if she ends up playing professionally in Europe as she intends, that may too become a weapon of hers at some point.

Barnett only played two seasons for GVSU after transferring from DI Wisconsin-Green Bay, but she provided plenty of offensive punch in her two years, which makes her ideal as the first player off the bench for this Lakers all-decade team.

Despite playing through an injury shortened senior season, Barnett displayed a diverse offensive repertoire when fully healthy. During her junior year, Barnett finished fifth in the GLIAC in scoring (15.8 ppg) and second in assist-to-turnover ratio (2.2) while also shooting 41.5 percent from the field and 39.6 percent from three.

Stelfox was an interesting recruiting case for GVSU. A native of Bowie, Maryland, Stelfox was originally set to attend and play basketball at Ohio University, but was deemed ineligible for her scholarship due to a book-keeping error that showed she was a half-credit short in mathematics to qualify for a DI scholarship. Her coaches scrambled to find her an alternative university to play at and conveniently came across Grand Valley State, who had one available roster spot and scholarship at the time.

Stelfox initially was not sold on going to a school over 10 hours away from her hometown, but after a visit to campus to meet the team and former head coach Janel Burgess, she bought into the program and blossomed into one of three players to be selected to an All-America team this decade.

During that All-American season her sophomore year, Stelfox averaged 14.8 points per game while corralling 5.4 rebounds per game and shooting 53.3 percent from the field. In the grand scheme of this team, Stelfox would serve as a great backup to starting center Cassidy Boensch who could slide right in and provide that low post scoring ability with range out to 15 feet while Boensch was recovering.

Padin was another strong contender to start at point guard on the all-decade team. All-time, she has DeBoer beat in career assists (423-391), career 3-point shooting percentage (32.3-31.7), and steals per game (2-1.2), but DeBoer has her beat by a wide margin in career points scored (1,271-956) and field goal percentage (41.2-34.1), along with DeBoer owning a 107-22 career record across four years this decade in comparison to Padin’s career, which was split between two decades and featured a combined record of 30-24, including a losing campaign of 10-16 during her injury-shortened senior year.

Padin fits the same role as Stelfox, but from the point guard position. Padin slots perfectly right behind DeBoer as a floor general who can be trusted to execute their playbook on the offensive end of the court while DeBoer is resting.

At this point in the depth chart, I wanted to fill out the roster with a variety of players that provide offensive punch from a multitude of positions. Cairnduff fits this agenda to a tee.

For her career in Allendale, Cairnduff averaged 9.6 points per game while shooting 37.1 percent from beyond the 3-point arc and 85 percent from the charity stripe while slotting primarily at the small forward and power forward positions, which rank ninth and first all-time at GVSU in career 3-point and free throw percentage.

Enter LaPrairie, who is GVSU’s all-time leader in career 3-point shooting percentage at 40.4 percent over three years spent playing inside of the GVSU Fieldhouse Arena. While LaPrairie primarily slotted as a small forward, she could hop up to shooting guard and help GVSU play a larger five woman lineup if need be.

Tucker, a two-time All-GLIAC second team nominee for the Lakers, makes this roster as an ideal stretch four that can extend her range out beyond the 3-point line and provide space for bigs like Boensch and Stelfox to operate down low.

Tucker scored 1,035 points and collected 560 rebounds over her GVSU career while also notching a 33.9 career 3-point shooting percentage. At the peak of her game, Tucker was scoring 8.3 points per game on 35.7 percent shooting from deep.

Hedemark earns the final roster spot thanks to her defensive prowess in the backcourt as well as having high marks in career field goal and 3-point percentages.

The two-time all-GLIAC defensive team nominee collected 188 steals in her career, which is the second most among all Lakers over the past decade and only one behind starting small forward Kayla Dawson’s total of 189. Offensively, Hedemark averaged 6.3 points per game for her career while shooting 45 percent from the field and 35.7 percent from 3-point land.