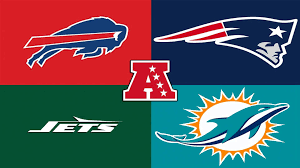 In this barren wasteland of sports news, there has been one league that has become a savior of our sports sanity: NFL free agency. Lanthorn Sports will be recapping keys moves of the off-season while breaking down where teams now sit after the initial free agency period. Today, we will be recapping the AFC East.

BUFFALO BILLS: The Bills began free agency with almost $77 million in cap space and one of the teams with the most money to improve their team.  After going 10-6 and making the playoffs last year, the Bills are a team rising up with third year QB Josh Allen still on his rookie contract.

The team added wide receiver Stefon Diggs in a trade with the Minnesota Vikings for a first round pick in this year’s draft and a couple late round selections. Diggs will be a tremendous addition to the team’s receiving core that was desperate for a number one receiver after John Brown led the team with 1,060 yards and 6 touchdowns.

The disgruntled Diggs had 1,130 yards and 6 touchdowns last season with the Vikings and has been longing for a trade, with demands to Minnesota’s front office for a mid-season deal. In a new situation and with a younger, strong-armed quarterback in Allen, Diggs should see an even better season in Buffalo this year.

The Bills also improved their defensive front by adding edge rusher Mario Addison from Carolina and defensive tackle Vernon Butler. The team also made a surprising move in the secondary by signing former Pro Bowler Josh Norman to a one year, $6 million dollar deal. The deal may be overpriced based on Norman’s inconsistent performance last season, but with an abundance of salary and the upside of Norman regaining his old form, it’s a low-risk move for the team.

MIAMI DOLPHINS: The Dolphins also started free agency with an abundance of cap space. The Dolphins began the year thought of as the team tanking for the draft.

The Dolphins traded multiple assets from the team like safety Minkah Fitzpatrick and tackle Laremy Tunsil. Miami did finish last in the division, but they were highly competitive in all their games last season. Miami signed the best corner back available on the market, Byron Jones from the Cowboys, to a five year, $82 million dollar deal, making him the highest paid corner back in the NFL. The team also signed former Lions and Patriots linebacker Kyle Van Noy to a four year, $51 million deal. Van Noy had 56 tackles and 6.5 sacks last year with the Patriots.

Key Patriots defenders have a history of under-performing away from New England, like Malcom Butler and Jamie Collins with the Cleveland Browns. However, Dolphins head coach Brian Flores was a defensive coach with the Patriots before landing in Miami and has a history with Van Noy, which could make this signing different from other Patriots departures.

The Dolphins also signed edge rusher Shaq Lawon and Emmanuel Ogbah to deals to improve their pass rush. Former Bears and Eagles running back Jordan Howard was signed to a two year, $10 million dollar deal. Howard figures to be in the RB rotation with another back that the team will most likely draft later this month. The team is also likely to draft a young quarterback to be the future of the franchise like Tagovailoa, and have QB Ryan Fiztpatrick return to the team and mentor any young signal caller they select.

The Dolphins will be improved in almost all aspects on the field next year, but are still a few years away from really competing for the top of the division. STOCK UP.

NEW ENGLAND PATRIOTS: The Patriots lost arguably the greatest quarterback to ever play the game in Tom Brady by not even offering the six-time champion a new contract. Head coach Bill Belichick obviously thought it was time for the team to take a new direction and that Brady didn’t have much left in the tank.

This leaves the Patriots to deal with not only with the departure of Brady, but also with key starters in Danny Shelton, Kyle Van Noy and Jamie Collins. The team brought in back-up journeyman QB Brian Hoyer who knows how to run offensive coordinator Josh McDaniels’ system, as this is Hoyer’s third stint with the team.

New England brought back star safety Devin McCourtey to keep the best secondary in the NFL intact. The team also brought in safety Adrian Phillips from the Chargers to add to the secondary. These were the only big signings the team made, along with some minor ones to the defensive line and wide receiver room. This is the first time in nearly two decades that the Patriots don’t have a strong advantage in the AFC East.

With 12 picks in this year’s draft, the team will look to add key players and depth pieces as the team becomes more youth-oriented. The team may even add a QB to compete with Jarrett Stidham. Belichick may turn the team into contenders this season as he is one of the greatest coaches in league history, but with the loss of Brady and so many questions still to be answered in New England, this is a wide open division for the first time in a long time. STOCK DOWN.

NEW YORK JETS: The Jets were in a similar position as the Bills this off-season. The team started with playoff hopes last season, but disappointed last year with a 7-9 record and third place finish in the division after signing RB Le’Veon Bell and LB C.J. Mosley.

With QB Sam Darnold still on his rookie deal and showing upside throughout his first two seasons, the team was supposed to add playmakers for Darnold and the offense. However, they didn’t make many impact signings.

However the team didn’t do enough to give Darnold enough weapons outside of the draft. The team also signed a few players on the defensive side of the ball, adding LB Patrick Onwuasor, EDGE Jordan Jenkins and CB Pierre Desir. This was the Jets opportunity to add to the offense with the AFC East wide open and Darnold still under center for cheap, but they failed to make many impact moves. STOCK NEUTRAL.