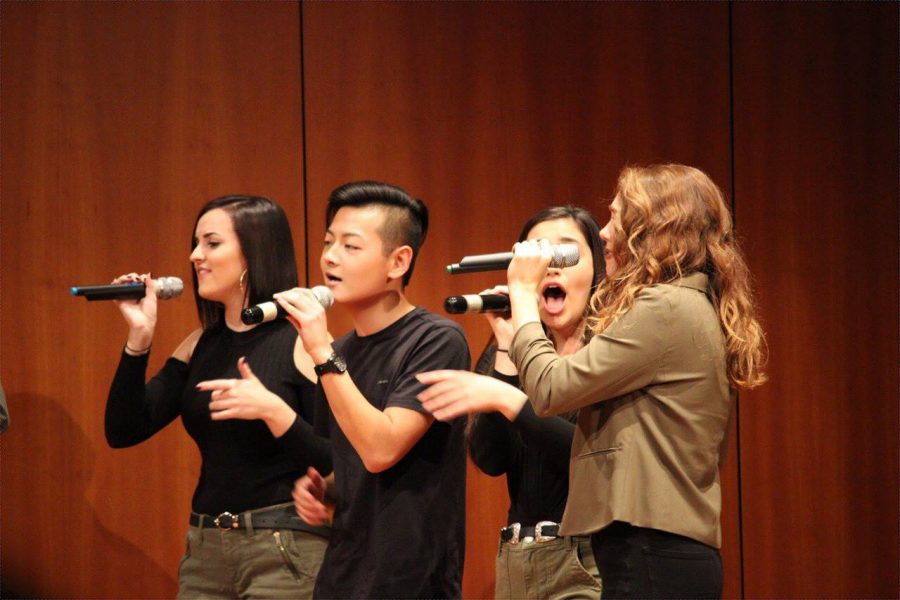 Social distancing has made it impossible for groups to gather and perform, however, this did not stop one of Grand Valley State University’s a cappella groups from gracing the community with a virtual message of hope. Euphoria hurdled the obstacle of distance and published a virtual choir video of the group singing Bill Withers “Lean on Me.”

Sunday morning, Euphoria President Joseph Vanarendonk was asked by GVSU President Philomena V. Mantella to be a part of her efforts to spread messages of positivity through the GVSU community. Mantella gave Vanarendonk the freedom to decide how Euphoria would contribute to the movement. By Sunday night, Vanarendonk had gathered, organized and edited clips together to create Euphoria’s first virtual choir video.

From the comfort of their own homes, Vanarendonk asked Euphoria members to send him a video of them singing “Lean on Me” as they listened to the same instrumental track in their headphones.

The video was uploaded on YouTube and posted across various social media platforms. Mantella and Euphoria received positive feedback from the community through likes, shares and comments. The goal of this video was to give people a break from the hard news that has been flowing through their newsfeeds the last few weeks.

The video was not only intended to benefit the audience but it helped Euphoria’s members cope with the cancellation of the rest of their shows and events for the remainder of the season.

Euphoria members were very disappointed when they found out they could not hold another live performance for at least the rest of the semester. Creating this video allowed members to once again unite as a musical force and continue to practice what they love.

“All the members were so happy they got to sing,” said Euphoria President Joseph Vanarendonk. “It was uplifting to the group as well to be able to do it together virtually.”

Euphoria will be losing four members next year. Seniors Grace Veenstra, Claire Waldecker and Vanarendonk will be graduating and Euphoria’s music director Leslie Meloni will be transferring to the University of Michigan’s music program.

These seniors are not only disappointed about missing their last semester at GVSU, but Vanarendonk said he is concerned about the state of the job market.

“I’m still wrapping my mind around it. I just feel robbed of a lot of my final senior moments. The only consolation I can take from the whole thing is that everyone is in the same boat. Every senior in the country is experiencing what I am and many are experiencing it much worse.”

The COVID-19 outbreak was unexpected by people around the world, however, Euphoria has joined the countless other musicians who have posted videos online to help the public find simple joys during the pandemic.