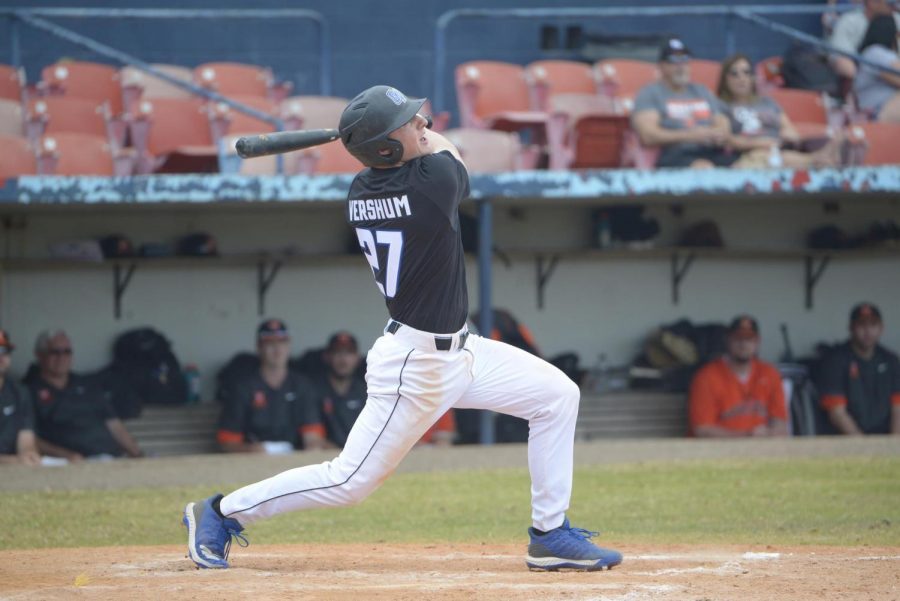 Growing up in Whitmore Lake, Michigan, there were two commonalities for Blake Vershum: baseball and firefighting.

“I’ve been playing baseball since, my dad says since my third or fourth birthday,” Vershum said. “One of my aunts bought me a little orange baseball bat and my dad says ever since then all I’ve wanted to do was swing the bat.”

Vershum said there were too many times to count when he and his dad would go out in the backyard and play baseball together. He grew up playing tee ball, graduated to coach pitch, then tried out for his first ever travel team when he was 8-years old.

It was shortly after this time that Vershum discovered his second love: firefighting.

“I remember when I was like nine or 10-years old, I would always hear the fire trucks roll by our house, lights and sirens and everything” Vershum said. “I would always jump off the couch and look out the window to see then go by. A couple times my younger brother and I would hop on our bikes and try to follow them and see where they went.”

Once or twice Vershum did catch up to those firetrucks and what he saw left him enamored. After seeing firefighters in full gear out on the job, the inception of a future career was set, and Vershum began to envision a life where he too would become a firefighter.

“Flash forward to my senior year of high school, my school counselor knew I had a passion for firefighting, (and they) approached me and said there’s this new program going on where my senior year I could enter a fire academy up in Howell, (Michigan),” Vershum said.

The program was about 20-25 minutes away from where Vershum lived, but that did not deter him from looking into it. After looking into the program online, he talked to an instructor who would go on to give him a tour of the facilities at the fire academy. In short, Vershum was sold.

“I fell in love with it, I thought it was awesome,” Vershum said. “It was everything I ever wanted, so I picked that up my senior year of high school and went through a nine-month fire academy.”

Upon completing his nine-month stint of basic training at the academy, Vershum took (and passed) the Michigan fire officer one and two certification tests. He then promptly applied to his hometown fire department in Northfield Township, where he has served his community part-time ever since in order to also accommodate his collegiate academic and athletic career.

In his first collegiate baseball stint at Schoolcraft, Vershum excelled behind the plate, at the plate and out on the base paths. In his lone season playing for the Ocelots, Vershum led his team in hits with 45, batted .365, hit six triples, and stole 10 bases all while helping manage a pitching staff from behind the dish.

Toward the end of his freshman year, Vershum sought to transfer to another 4-year university where he could primarily pursue a degree in physical education and despite a stellar all-around season out on the diamond, Vershum thought his baseball career had likely come to a close.

“I never thought about playing baseball after Schoolcraft,” Vershum said. “It was May (2018), near the end of my one season at Schoolcraft and my head coach (Rob Fay) approached me and asked if I was still interested in playing baseball. I said, ‘Well yeah, if I’m able to I’d love to, absolutely.’ So, he reached out to coach (Jamie) Detillion at GV and (head) coach Detillion reached out to me.”

From there, Detillion, Grand Valley State University’s head baseball coach, set-up an open tryout during late May for Vershum who made the drive over from Livonia to showcase his skill set. From the moment he stepped on the field, it was clear to Detillion that Vershum was a gamer.

After meeting Vershum for the first time and learning of his extracurricular commitments, Detillion said he was blown away by the level of maturity exhibited by Vershum at his age.

“As soon as I got a chance to know him, he was telling me he works full-time in the summertime as a firefighter and it’s not like he gets just a couple hours here and there, being a firefighter is a full-time job,” Detillion said. “At his age, it’s one of the most commendable, respectable things you can do because usually — lets be real — 18 to 22-year old kids don’t really think about what they can do to serve and help others in the community and that’s something he’s doing all the time.”

Vershum said that serving his community and learning to become a firefighter has taught him a level of attention to detail and professionalism that has allowed him to become more and more successful as his life has gone on.

“I’ve learned a lot of values (working as a firefighter), one that sticks out to me in particular is discipline,” Vershum said. “Back in fire academy, I can remember that we would always have to stand at attention and be clean shaven, uniforms had to be wrinkle free, boots had to be polished. I had never had that in my life until then and it just taught me a lot about the little things and becoming a more disciplined individual.

“Going back to the fire academy again, we had (physical training) twice a day and for the first hour or so of classes we would do (physical training) in full gear and I definitely think that helped me a lot all through high school. Some might think that’s hard but I always looked at it as I have to work my butt off because, regarding calls we’ll get, people are having the worst days of their life and they’re not going to want someone showing up looking nine shades of grey and like they maybe can’t handle their job.”

According to Detillion, whenever called upon, Vershum has always been ready and that is reflected in his stat line throughout GVSU’s shortened baseball season.

“He’s been a great teammate that’s elevated his game when called upon and he’s gotten better and better,” Detilion said. “He’s an athletic kid and we put him in some situations in the springtime where we put him in to pinch run and we put him into hit because he’s good at putting pressure on our opponents in those facets.”

In 11 games played and two starts, Vershum hit .300 at the plate (3-10) with a .462 on base percentage, notched eight runs scored and drove in two runs on a double suicide in a 5-3 victory against West Virginia Wesleyan on March 2.

“For the amount of time that he played, man, it’s one of the most productive stat lines that you’ll see per plate appearance,” Detillion said. “He got on base, got a hit, or scored just about every time up, which is all you can ask of a player.”

Although his contributions on the field were cut short due to the spread of the COVID-19 pandemic, that doesn’t mean the junior catcher and corner outfielder for GVSU is done contributing in a meaningful way. With baseball season cancelled and classes moved to remote online learning at GVSU, this has allowed for Vershum to rotate back into being a full-time firefighter in his hometown where he is on the front lines helping keep the community safe during the spread of the coronavirus.

“I got back from Grand Valley about three weeks ago and we immediately added additional personnel to our shifts, so we have extra people working on maintaining and cleaning the fire station,” Vershum said. “I mean, we do a lot of fire calls and medical calls at night, so we need to maintain high cleanliness standards in order to best do our jobs.”

A lot has changed on the job to accommodate the times, Vershum said. In addition to it being standard that all firefighters that are a part of his department wear H-glasses and N-95 masks to help slow the spread of COVID-19 while out on the job, crews are now working 36-hour shifts that start at 7 a.m. and last until 7 p.m. the next day.

Vershum said the typical shift starts with firefighters sitting down to a cup of coffee at 7 a.m. where they set their itinerary for the day in terms of cleaning and training. After their schedule is established, they eat breakfast together as a crew then go through their daily equipment checks to make sure everything is in working order and ready to go when they are called into the field.

From there, they go about their cleaning and training duties until lunch, unless they receive a call. After lunch, they continue with their training until dinner at 7 p.m. when part of the shift switches over. After dinner is done, the crew cleans the fire station once more and by 9 p.m., lights are out and the crew goes to bed until called into action. Then everything starts all over again at 7 a.m. the next morning.

At the time of the interview with Vershum over the phone, they already had one medical call before lunch. While times have been tough mentally on everyone within the community and around the world, Vershum felt that it is important to stay calm and remain an active bystander while practicing social distancing guidelines.

“My best advice for everyone would be to take a deep breath and remain calm,” Vershum said. “If you are out in the community and happen to see an emergency, call 9-1-1 and get first responders there. This kind of stuff is what we train for 365 days a year and we signed up for it, so just stay calm and help us when you can and we’ll all be better on the other side when we get there.”

When  society once again returns to some form of normalcy, Vershum said that he will be glad to return to working on his game out on the diamond.

“I know I have a lot of athleticism and that’s something coach Detillion wants me to use a lot of,” Vershum said. “I was a catcher all year, but when we went down to Florida for our spring trip, coach (Detillion) approached me and said that we want to bounce you out to the outfield so you can use more of your speed. So, I would say my goal moving forward is to be able to play as many positions as possible at a high level so I can help this team and my brothers win.”