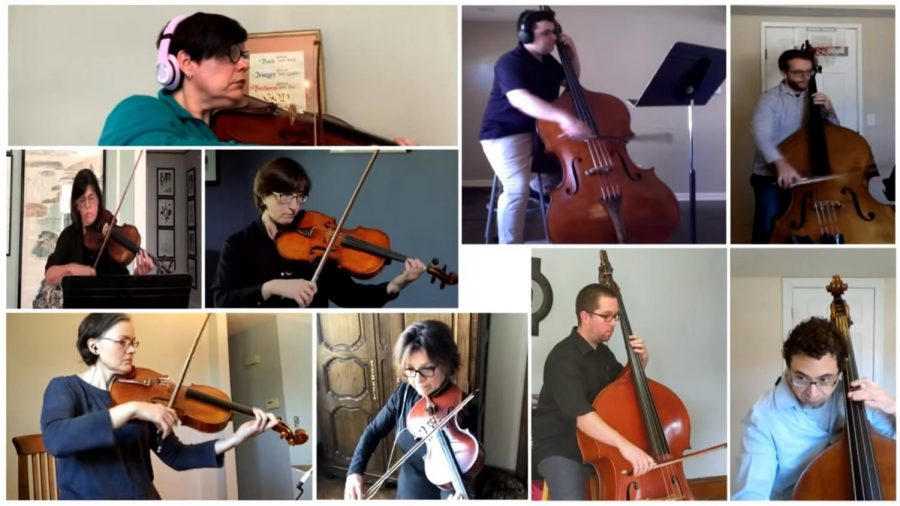 The COVID-19 outbreak has temporarily eliminated live performances, creating the longest hiatus some musicians have ever faced.  This experience is new to everyone, including members of The Grand Rapids Symphony whose careers have spanned multiple decades.

Violist Kristen Shoup Lausman has been performing with the symphony for about 26 years. She recalls the “surreal” feeling she experienced on March 12 when the announcement came out that all of the concerts were canceled. She said even during some of the worst snowstorms and weather conditions, the show goes on at the Grand Rapids Symphony.

Lausman said the first week of the quarantine felt like a little bit of a break. However, it was not too long after when it all started to feel very wrong. “It’s kind of a sense of feeling like I don’t belong anywhere,” she said.

Last week, over a Zoom call, some members of the symphony virtually gathered to socially reconnect. Lausman said they could all relate to the strange feeling they get when a reminder on their phone pops up for a rehearsal they scheduled weeks in advance. At first anxiety strikes because they think they have forgotten to prepare for rehearsal. Then they remember there is no rehearsal to prepare for. Lausman said it feels wrong to be home on nights the symphony typically performs. She feels like she needs to be out of the house and working.

“I really miss the highs of playing the concert,” Lausman said. “It’s a real rush and a real feeling of accomplishment. To not have that has been kind of disturbing.”

While live performances have been cut out of Lausman’s weekly routine, music has remained a constant. She said she has taken advantage of this break from work to play music that makes her happy. This is something that she is not able to do often enough with her normal work schedule.

Performing as a group has not been completely taken out of the equation, thanks to technology that allows them to combine videos of members playing individually at home.

On April 9, the Grand Rapids Symphony posted a virtual performance of the “Hallelujah” Chorus from Handel’s Messiah. In the video, the musicians introduce themselves and share what music means to them. The introduction is followed by videos of the musicians paired with the sound.

Creating this virtual performance was a difficult adjustment for the musicians. They were each given a track to listen in their headphones to simulate the experience of playing with a group. When the recording was finished, Lausman said it was strange to listen to just her part in the song.

Even though the music is presented in a different way than audiences are used to hearing, Lausman believes it is important that symphonies continue to post performances.

“I think that music can speak to people in ways they didn’t even know that they needed. All of the sudden you get to this moment in life where there is nothing going on and you start listening to all of these things (virtual performances) and some of them bring you so much peace,” Lausman said. “I think music is so important because it really does play such a big part in all of our lives and so many times we don’t realize it.”

In addition to keeping the symphony connected socially and musically, members are still being paid with full benefits. Lausman said the Grand Rapids Symphony’s Mary Tuuk made it clear to the symphony that they had no intention of cutting things because they were loyal to taking care of their musicians.