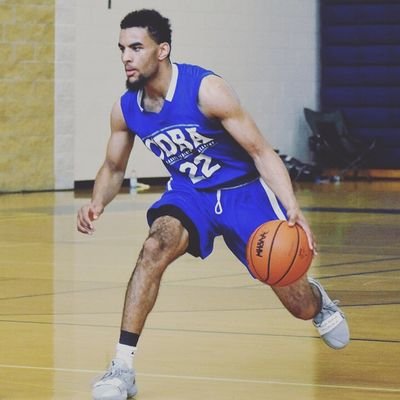 The best basketball game that Trevon Gunter ever played started in a way that no hooper wants a game to start: with an ugly airball.

Gunter quickly recovered after that miscue, as the 6’1″ point guard balled out for the Kalamazoo Central Maroon Giants with a laser-sharp focus. He managed a decent first half before scoring 30 points in the third quarter and making 8 of 9 threes on his way to a career-high of 42 points. That high-scoring quarter is the second-highest in Michigan High School basketball history.

“It all happened in a blur,” Gunter said. “I saw one shot go on and from there I just stayed focused and fed off the energy from the crowd and my teammates.”

While games like that prove that Gunter is more than capable of performing at a collegiate level, Gunter didn’t realize he could actually play college ball until he joined the varsity squad after his freshman season.

“I knew I could play in college when I got pulled up to varsity my sophomore year,” Gunter said. “After a few weeks of practice, I knew I could hang with the big boys.”

Gunter certainly accomplished a lot in three short years, as he was a three-time all-conference performer in high school, including first team honors each of his final two seasons.

His senior season saw Basketball Coaches Assocation of Michigan first team All-State honors and MHSAA All-State honorable mention accolades. He was a two-time captain of the Maroons and his team named him ‘Most Improved Player’ in both his sophomore and junior seasons.

He’s one of the most accomplished basketball player out of a school with an impressive alumni list that includes current Division 1 basketball players in Isaiah Livers, Devon Daniels, Devin Oliver and Doug Anderson, a few former NFL in Greg Jennings and Jerome Harrison, and a sharpshooter by the name of Derek Jeter.

Gunter has had a basketball in his hands as long as he can remember, as one of his favorite Christmas presents is the little Tykes hoop he got when he was one.

From there, he practiced dribble moves and shot on his mini-hoop, trying to replicate moves he saw a certain King-like player execute in Cleveland.

“I loved Lebron James growing up,” Gunter said. “He’s always been incredible, on and off the court.”

While his love for Lebron James was almost instant, his love for GVSU did not come until high school, when assistant coach Taylor Johnson spoke to his AAU team.

Johnson’s down-to-earth personality and passion resonated with Gunter, and a few visits to Allendale, Gunter fell in love with the sense of home he had found less than an hour away from his home in Kalamazoo.

“I love how it feels like a tight-knit community, and I love how close it is to home,” Gunter said. “My Mom will especially love that.”

Gunter has kept in touch with the guys on GVSU basketball team via Zoom meetings and group chats, as he and fellow incoming freshmen Ethan Alderink are in the tough position of trying to form chemistry with teammates they can’t actually see in person.

The former Maroon Giant has been going through an extensive workout routine since the quarantine started, doing core workouts every day, alternating between upper and lower body workouts, and perfecting his already-pristine jump shot on the hoop in his driveway.

When he’s not chatting with his teammates and adding muscle, Gunter enjoys mowing the lawn, cutting the grass and gardening in his backyard as way to distract himself from a rather gloomy time.

“I could see myself having my own garden when I get older,” Gunter said. “It’s a great way to get my mind off of all the craziness happening in the world and be in my own little world.”

Once this quarantine ends and Gunter can head back on campus, he’s excited to get in the gym and focus on the sport he has loved since he was 12 months old.

“At this point, I’m super excited to get on campus and finally meet my teammates in person,” Gunter said. “I just want to get back to work.”