GVSU Football reacts to Black Lives Matter protests, gettting closer in tough times, and possibly playing in an empty stadium in the Fall 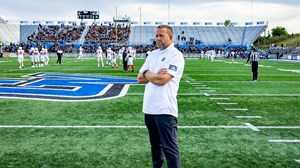 When Grand Valley State Football coach Matt Mitchell saw the video of George Floyd being killed at the hands of Derek Chauvin and the three officers who watched it happen, he was shocked, disgusted and appalled.

He felt similar feelings in the early hours of May 31, when he saw Grand Rapids, a city that himself and many of his team members call home, become covered in broken glass after riots.

“The video was shocking, and the destruction of Grand Rapids was tragic, but it was great to see the city, including our players and coaches, helping to clean up the city,” Mitchell said.

There hasn’t been a lot of talk about football over the past few weeks, as Mitchell has focused his energy on helping his players through this tough dialogue while making his voice heard.

He joined his family and players in protests this past Saturday, June 6. He and his players have kept in touch through group chats, where the young men could speak freely about their feelings during this tumultuous time in American history.

Mitchell has made sure to reach out and FaceTime every player of color on the team from June 3-5, checking up on their mental being personally, with scheming for the upcoming season being the last thing on his mind.

“This has been a tough time for our country these last few weeks, but our players have been responding beautifully,” Mitchell said. “I’ve learned a lot from their thoughts and experiences”

Mitchell and his staff have taken the time to make sure to have a dialogue about the current issues in the country, which he believes has helped to bond the team in a COVID-19 world where face-to-face contact is limited.

“We’re bringing a few guys to talk to the team, including (counselor) Anthony Adams and (special associate to the athletic director) Damon Arnold to talk to the guys about their thoughts on this,” Mitchell said. “In a weird way, I feel like everything happening has brought our team closer together — honoring not just Floyd, but the unjust killings of Breanna Taylor and so many others”

At this point in the summer, all workouts are voluntary, as players are on their own to stay in shape for the next month. Mitchell and his staff are allowed to bring players on campus in limited groups starting July 6, and the whole team won’t be back together fully until team camp starting August 10.

While Mitchell believes it could be weird to possibly play football games in the fall with no fans in stands, he believes that getting back into football soon can help his players’ mental health. With the proper health precautions in place, football can be a way to take their minds off of what has been a year that has so far felt like it has lasted a decade.

“I think that getting back to playing football in the fall will be good for our players and coaches mental health,” Mitchell said. “We will take every proper safety measure of course, and the idea of playing with no fans in the fall is a little jarring considering we’ve led D2 in attendance for 10 years now. At the same time, it goes back to the true competitors mentality, and will test whether or players can feed off their own energy rather than the crowd. Getting back to football and slowly returning back to normal should help a lot with our players mental health, and I can’t wait for that.”

One of the Netflix shows that Mitchell has made sure to binge over the quarantine is “Ozark,” a stressful dramedy about a Chicago family who is forced to move to Missouri to help launder money for a Mexican drug cartel.

It has been an especially stressful off-season for GVSU football since Nov. 16, when GVSU lost to the Wayne State Warriors at home in a manner that killed their postseason dreams.

Mitchell has felt like the main character of “Ozark” since that time, since he has had to manage so many things all at once, but has been able to keep his head above water and, most importantly, make sure his players are in a proper head space in these crazy times.

“Ever since the Wayne State loss, I’ve felt like Marty Byrde in a way, with everything going on not only in our program, but in the world,” Mitchell said. “I’m glad that we’ve taken the proper precautions, and I couldn’t be more proud of the staff and players around me over this time.”