Opinion: Our wounds run deep, but we are not as divided as it may seem 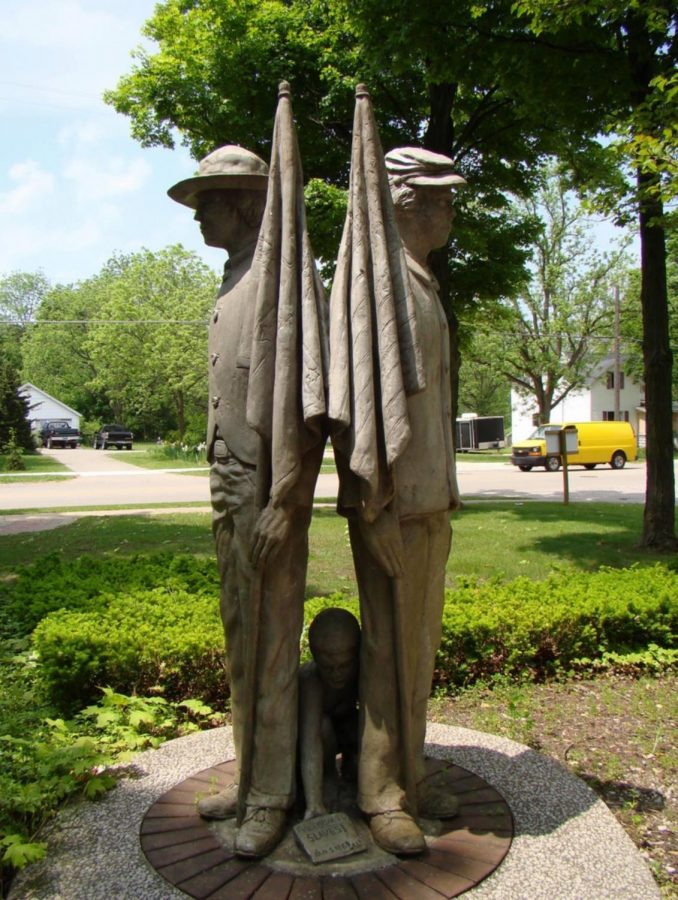 Over the past couple of weeks, I have been able to experience firsthand the racial and systemic unrest that has exploded like a powder keg all across the United States.

A few weeks ago, I took to the streets to document the first large-scale protest in Grand Rapids, which inevitably escalated from many fronts into a riot. I did not stay long enough to be tear gassed or witness the chaos and destruction that occurred all through the late night and early morning, but I was able to catch up with some of my journalistic colleagues and fellow students who were impacted. In hindsight, it was an impactful experience unlike anything I have ever experienced.

The next day I was able to document the cleanup, which showcased the ability of humanity to come together in positivity and stood in stark contrast to the disappointing events that had unfolded the night prior.

In the days that followed, I was able to witness community members voice their frustrations over the racial and systemic injustices consistently faced by people of color in this country, while also documenting the arrival of the National Guard to fortify downtown Grand Rapids. More so, I was able to capture Grand Rapids’ first Black Chief of Police kneeling with protestors while chanting “I can’t breathe” with them in remembrance of George Floyd.

A few days later I was even able to talk to artists around Grand Rapids, as they created murals supporting the Black Lives Matter movement on the boarded-up windows of businesses and restaurants damaged during the riots.

Then came Saturday, June 27, in Allendale. In recent weeks, the nationwide movement to address systemic racism and oppression has turned its sights to statues and monuments that celebrate well-known racists throughout American history — take the statue of John C. Calhoun in Charleston, South Carolina for example. Allendale, too, has become a target for its display of one of those statues in question, with the Michigan Association of Civil Rights Activists (MACRA) pointing out a local point of contention.

Just off of Lake Michigan Drive along 68th Avenue near Walgreens, you can find the entrance to Allendale Community Park, and right next to it, the Allendale Garden of Honor. It is in this artistic creation that veterans of each American war are celebrated and remembered with the dedication of a statue.

Walking around the small circle of statues, the common observer can easily identify which war each statue represents by the uniforms depicted on each that were typical of their era; the dual bandoliers and musket of the Mexican American War, the overcoat and M1 Garand-style rifle carried by an Asian-American soldier during the Korean War, and so on.

But when one stops in front of the statue remembering the Civil War, this is where the issue arises and why a protest occurred. The statue depicts two soldiers standing back-to-back — one from the union, one from the confederacy. In between them on the ground lies a child, reaching for what appears to be a piece of paper paying homage to the Emancipation Proclamation issued by President Abraham Lincoln on Jan. 5, 1863 — but is not the date on the Proclamation, which is Jan. 1, 1863.

To the left, the statue is an ever present reminder of the oppression of Black people in this country and a senseless dedication half-celebrating a group of racist, treasonous separatists that would have rather enslaved human beings and made a profit as opposed to living up to the values written within our Constitution. As such, they wanted the statue to be removed.

To the right, they agreed with the left that the confederacy is a stain on the historical integrity of the United States. Among the conversations I initiated with both sides of the protest and the ones I witnessed between others spread throughout the area, there was no disagreement there.

The right, however, thought the statue should stay because of two things; one, it was a statue that represented tearing families apart in the name of freedom, and two, it was a monument that could provoke discussion about all of the wrongs perpetrated by the South leading up to and during the Civil War.

Now while I can understand where the right-wing counter-protestors were coming from in a sense that the statue could serve as a point of discussion and education, I still believe that there should be no statue or monument depicting the confederacy that is open to interpretation — especially in a northern state.

During World War II when the first Nazi concentration camps were discovered, the commander of allied forces in Europe and future president, Dwight D. Eisenhower, set out to see every nook and cranny of one such camp and had his soldiers thoroughly document everything that they saw because he wanted to provide first-hand evidence that the horrors perpetrated by the Nazis could never be claimed as propaganda or a false story.

I believe we should follow Eisenhower’s lead in the depiction of all things racist in this country’s history. Therefore, if there is to be a statue or a monument depicting the confederacy, it should depict them as, in the words of Yale historian David Blight, a “failed, four-year slaveholders’ rebellion to sustain white supremacy” and clearly label them as such. If there is to be a statue constructed of an influential figure or politician from American history who is known to have been racist, it should be done so with an asterisk next to their name that signifies them as a racist.

While the proper dedication and erection of monuments in America to correctly represent history is an important topic of discussion, there was another overarching message in the interactions between the left-leaning protestors and right-leaning counter-protestors.

At the epicenter of the protest — the area directly around the Civil War statue — emotions ran hot between multiple people as insults were hurled back and forth, left and right, neither side particularly willing to hear the other out as past experiences and differences of opinion fueled a contentious climate. But as one strayed further from the center, several different conversations could be seen going on — conversations that are dearly needed in today’s political landscape.

One such conversation that struck me was between three white men that identified as counter-protestors — all open carrying and two wearing Kevlar body armor, no less — and two men — one Black and one Indian in ethnicity — who identified as the opposite.

Across the span of what seemed to be a half hour, an intricate conversation unfolded that included the nuances of anything from what should qualify as a tax write-off, the distribution of wealth among the rich and working class, and the economic practices of big business and how politicians respond to them.

At the conclusion of the conversation, both sides could reasonably see where the other was coming from and walked away with the idea that the American political system, in itself, is broken. They also both conceded that they just focus their blame on different halves of the same whole and see the world through different lenses based on their backgrounds. Moving forward, they agreed that they could work together and need to use their rights to hold our government accountable in creating a system that best benefits all Americans, not just one that disproportionately supports white people and the top one percent.

This exchange of ideas mixed in with the contentious nature of the center of the protest is representative of the impasse we are currently at as a country. The issues of race in the United States have reached a boiling point once again and spilled over into unrest and action in the streets of our towns and cities all across our nation.

While it is okay to conduct ourselves with passion and charisma as we try to support people of color and bring about real, impactful change, we must not get lost in our emotions and forget to listen when there is a need to.

If I have learned anything from witnessing these protests unfold, it is that while there is a metaphorical battle to be fought — whether it be in our national and state legislatures, the streets, the courthouses, the police departments, or in our family homes — emotions will eventually subside and there will come a time where we need to pick up the pen, put down the pitchforks, and put words to pad and paper to be passed into law, so that we may create a more fair and equal system for all of us to live in, together.

Some may say, “Eli, that sounds like something that is way too much to ask,” but given what I have seen recently, I would say that we are closer to that happening than you think, and that there are far more people willing to get there on both sides of the aisle than what mainstream culture may insinuate.

All I am saying is that so long as we learn to open our ears and empathize with the struggles of one another, we could accomplish something incredible in this country and be able to make an even more valid claim that we are actually as great as we advertise our country to be.